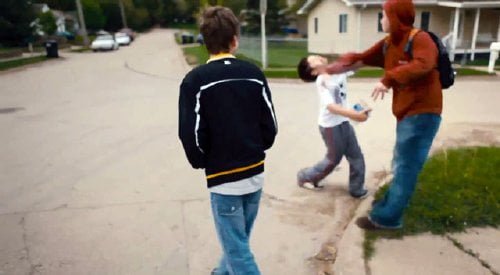 When they found him hanging in his bedroom closet, David and Tina Long knew exactly why their seventeen year-old son Tyler had taken his life, but 12-year-old Alex Libby of Sioux City, Iowa, has been suffering in silence for years when his parents find out just what he's been enduring at the hands of a "Bully."

Harvey Weinstein knows how to play his cards, creating a ratings firestorm over the MPAA's ridiculous decision to slap an 'R' rating on this film for 7 instances of the 'F' word (only one is allowed for a PG-13, despite the fact that the 2005 documentary "Gunner Palace" got a PG-13 with 42 of them). This brilliant marketing move has gotten the film tons of publicity and even a GLAAD Media Award for Katy Butler, the teenager who started the MPAA campaign. Weinstein, a man well known for browbeating employees, competitors and filmmakers as well as being dubbed 'The Punisher' by Meryl Streep, presented it. Harvey Scissorhands also defended the artistic rights of his director to retain his F words (three are so inaudible the filmmaker helpfully subtitled them), even though bleeping them would have had absolutely no impact on the film whatsoever. The kicker? "Bully" isn't a very good documentary. The free 'It gets better' campaign on Youtube is far more effective. Cowriter (with Cynthia Lowen)/cinematographer/director Lee Hirsch ("Amandla! A Revolution in Four Part Harmony") has chosen a hot-button topic, but fumbled his material. His main focus is on Alex, the eldest child of five, born prematurely, with protruding lips and heavy glasses that have earned him the name 'fishface' from many classmates (disturbingly, Hirsch exaggerates Alex's features in a silhouetted profile - to what purpose?). Alex is seen taking care of younger siblings, comfortable at home, but completely unforthcoming about what happens outside of it despite his parents' frequent questions. We see a young boy completely outcast at school. Alex's weekday existence is heartbreaking. Oddly his school's assistant principal, Kim Lockwood, is prominently featured in what must seem to her like anti-bullying crusading, but which comes across as hopelessly clueless (she apparently made a tearful apology when the film was screened at East Middle School). In addition to Alex, Hirsch focuses on two sets of parents who lost children to suicide, the Longs and Kirk and Laura Smalley, whose eleven year-old son took his life, despite having a best friend who admits to having been a bully himself in second grade - Hirsch lets the friend talk about Ty, but why he failed to act to protect him is not addressed. We never get any sense of what happened to either of these two boys. Even shoddier coverage is provided for the two girls Hirsch highlights. Kelby Johnson is a sixteen year-old former star basketball player who came out of the closet in Bible Belt Tuttle, Oklahoma, then endured shunning and ridicule from students and teachers alike. But she has a tight circle of friends. She admits to have attempted suicide three times, yet seems pretty well adjusted with a fighter's instincts. It's impossible to get emotionally involved in the case of 14 year-old Ja'Meya Johnson of Yazoo County, Mississippi because we never hear anything about what she endured, only how she reacted to it. The young girl took her mother's handgun onto a school bus and landed in a juvenile detention facility facing numerous charges. The only 'solution' Hirsch offers is to track the Smalley's grassroots 'Stand for the Silent' campaign, in which they spread awareness about bullying and ask that people stand up to defend its victims. But this presupposes these victims have a friend to do so, which we have already seen is not the case with Alex and which was ineffective for their own son. Perhaps a 'Stand Up for Yourself' campaign should be run in tandem. Furthermore, Hirsch never addresses at what point in our history suicide started to become a byproduct of bullying and what has changed to cause this. Alex's mother touches on this with East Middle School's Kim Lockwood (the filmmakers became so alarmed at what they were seeing happen to Alex on the bus that they shared their footage with his parents) when she states how bus drivers didn't allow disruption in her days at school, but it never goes anywhere. "Bully" comes across as unfocused in the extreme when it's not following Alex. Kelby is introduced then doesn't reappear in the film until a random point in its second half. We don't hear any statistics, nor of any successful school programs. Internet bullying gets but one brief mention. School administrators proffer the same excuses about how they can't watch every kid every day even though we hear about incidents being reported with no repercussions. Usually a strong subject goes a long way towards forgiving deficiencies in documentary filmmaking, but despite some nice digital photography, "Bully" just isn't worthy of the publicity it's gotten. It doesn't even delve into the psychology of its title.

Over 13 million kids across America will be the victims of bullies this year at school, on the bus, at home, on their cell phones and via the internet. This national pandemic comes under the scrutiny of the lens of filmmaker Lee Hirsch as he follows the lives (and a death) of five kids who have all been the victim of a “Bully.” We have been listening to the controversy over the MPAA’s giving “Bully” an R rating. This decision garnered the wrath of Harvey Weinstein and a whole slew of free publicity has been generated for a film that is, at best, mediocre. The battle line that Weinstein and many others drew was to get the MPAA to change the rating to the needed PG-13 to allow the film to be viewed by the teenagers it aims at. Having finally seen the “Bully,” I cannot understand why the ratings organization gave the restrictive R – except that the F-word is used several times (though I did not even notice) and this alone earned the more severe rating. The MPAA dug in its heels and stood firm with its decision, forcing the Weinstein Company to release “Bully” unrated to allow it to be seen by kids on both sides of the controversy. Really, though, the brouhaha over “Bully’s” rating is just so much smoke and mirrors. The film itself is far too long and could have been trimmed down to 60 minutes and get an airing on PBS. The film seems to say that bulling is bad, but it is up to the individual being bullied to cry out for help. But, as one of the subjects of the film, 12-year old Alex, puts it best, “I don’t feel anything anymore.” The authority figures, in the guise of assistant principal Kim Lockwood, are shown as impotent in stemming the bullying tide that permeates America’s schools. She placates the concerned parents of a bully victim with the empty promise of “I’ll look into it,” but clearly will not. Are the schools, police and others in authority just giving up on the problem? That is what seems to be the case. School bus drivers once played the role of responsible adult and keeping order while transporting their wards. Now, they are merely the silent chauffeurs of school children and cannot affect any discipline on the kids who are bullies. The film ends on a hopeful/sad note but, to me, the filmmakers, led by Lee Hirsch, do little more than tell us that bullying is a problem. There is no attempt to seek out solutions to end the epidemic of abuse among our teenagers, which is what I expect a good documentary to try to do. I can only imagine how the parents of these bullied children must feel when they have nowhere to turn to protect their children. Bullying is a serious problem, too serious to get perfunctorily glossed over, which is what “Bully” does. The intent is admirable, the execution is not.