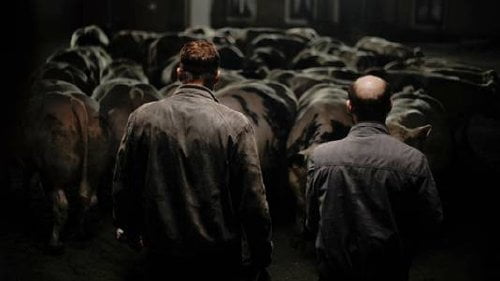 This year, Belgium was given a nod by the Academy as one of the five contestants for Best Foreign Language film for its gritty portrayal of the ruthless underworld of the distribution and use of illegal animal growth hormones. But there is more than just the hormone mafia in the film that follows the hulking, menacing and monstrous (for a good reason) Jacky Vanmarsenille (Matthias Schoenaerts) in “Bullhead.”

Jacky Vanmarsenille (Matthias Schoenaerts, "Black Book") is a Belgian cattle farmer with a droopy eye and menacing physical presence but childlike emotional mien. When he gets involved with the 'illegal hormone mafia' to boost his profits, his cattle become even more of a reflection of the man who takes the stuff himself because of a childhood tragedy in "Bullhead." Belgium's submittal for the Foreign Language Oscar is a surprise nominee given its dark and violent subject matter. The feature debut of writer/director Michael R. Roskam showcases a breakout turn by Schoenaerts in a unique crime thriller whose central raging bull mirrors his own corrupted milieu. Roskam drops his audience right into the action which can be initially disorienting as regards to figuring out who's who. The killing of a cop, Daems, on the trail of the black marketeers ties both together with the Vanmarsenille family, Jacky's childhood friend Diederik Maes (Jeroen Perceval), a perfumer from Jacky's past and the French speaking chop shoppers asked to dispose of a BMW. When a meeting at a race track turns to talk of bordellos, Jacky gets visibly rattled and makes his leave. It is here that we learned what happened many years ago, an event which will particularly rattle male audience members. (Pun partially intended, if not wholly accurate. "Bullhead" also features an explicit cesarean calving.) Schoenaerts is a compelling subject who, despite his more animalistic tendencies, also displays a gentle soul. This is evident in a beauty and the beast subplot involving Lucia Schepers (Jeanne Dandoy), a woman Jacky tried to protect as a child. The importance of friends and family in the circle of life and the role of the protector is a significant subject in "Bullhead" in the way two fathers act in the past and a mother acts in the present. Diederik's inability to protect his friend in the past plays large in the present with a late act revelation that adds more depth to Roskam's elegant parallels and symbolism. The film is beautifully shot by Nicolas Karakatsanis, whose camera tilts and swirls are organic to the emotional undercurrents of scenes and Raf Keunen's score adds a sad gravitas. The film's only flaw is in the initial articulation of a large cast of characters, exacerbated by the casting of the young Jacky and Diederik with actors who bear no resemblance to their adult counterparts.

This is a film in two distinct parts. On one hand, you have the whole hormone mafia thing where the illegal drugs are given to local cattle to fatten them faster – the quicker to market, the more money made. This tale of greed is punctuated when a Belgian cop is killed while undercover investigating the illicit animal hormone trade. This is very sinister business, indeed, but is really the backdrop for Jacky’s life story of pain and inner turmoil. Adult Jackie, himself, is pumped up on steroids that he has been using since a child following the brutal bashing of his testicles by a young bully, Bruno (David Murgia). Now, many years later, the constant use of steroids has turned Jackie in a hulking brute of an animal. He acts as enforcer for the underworld animal hormone mafia. He is so menacing that he intimidates his “clients” into submission with his animal grunts and real threat of pain, extreme pain. Jackie, through a business deal with another mob, meets again Diederik (Jeroen Perceval), his boyhood best friend who, apparently, turned his back on his friend at his hour of greatest need. Then, there is Lucia (Jeanne Dandoy), the boyhood crush for Jackie and younger sister to Bruno, who also comes back into the picture in his not so healthy adult years. Actually, it is an intricate criminal soap opera that needs to be seen and not told. There are lots of characters in “Bullhead” and first time feature writer-director Michael R. Roskam keeps them in good order after a confused beginning – character overload that sorts itself out as the crime opera unfolds. The script even has some sinister comic relief with a pair of chop shop guys who are ordered by the cop-killer mafia to get rid of the murder vehicle. Things go wrong for brothers Christian (Erico Salamone) and David (Philippe Grand’Henry) as they get mired deeper and deeper into stuff far beyond their control. So, what do you think? Not a bad first time out the gate for director/scribe Roskam, what with an Oscar nom and all.