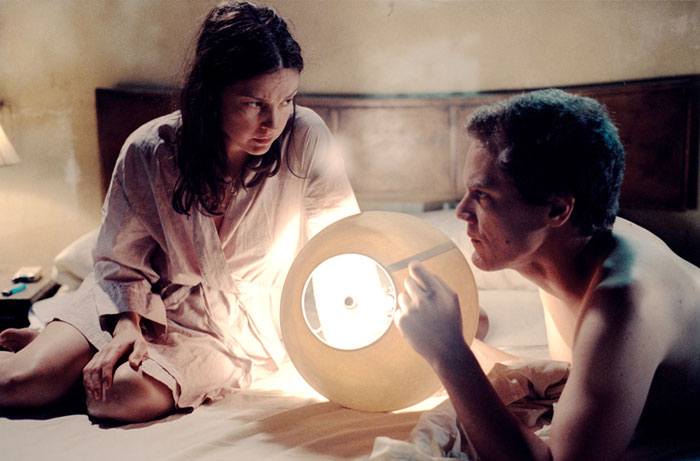 Aggie (Ashley Judd, "Twisted," "De-Lovely") is a hard partying waitress with a tragic past residing in a desolate motel waiting for a piece of it, in the form of abusive ex-husband Jerry (Harry Connick Jr., "Memphis Belle," "Copycat") released from jail too early, to show up at her door. But her best buddy R.C. (Lynn Collins, "The Merchant of Venice") brings back a seemingly gentle, sweet natured stranger, Peter Evans (Michael Shannon, the Marine in "World Trade Center"), who Aggie quickly clings to before being pulled into his delusions that he has been planted by the U.S. Military with a "Bug."

William Friedkin ("The Exorcist," "The Hunted") directs this low budget paranoia tale from an adaptation of the Tracy Letts play with uneven pacing which ultimately diminishes his film despite some fine acting and creepy mood. "Bug" is one of those failed experiments that still merits attention, if for no other reason than to see Judd pull herself away from those awful cop thrillers costarring Morgan Freeman to actually act again. During the long, slow build which establishes the four main players we learn Agnes is a lonely, broken woman whose fear is growing as the silent harassing phone calls from her ex increase. She seems to have a real friend in R.C. and perhaps because it is R.C. who has picked up Pete to continue partying at Aggie's, Aggie lets her guard down relatively quickly. Pete professes to have little interest in sex but a need to find a friend. After the two have talked most of the night (Aggie's invited him to stay on her couch), Pete has a change of heart and Aggie's more than willing to invite him into her bed. The next morning Aggie awakens to find coffee brewing and her shower running, then is jolted when it is Jerry, not Pete, who emerges from the bathroom. A violent encounter and angry words over a lost child are interrupted when Pete returns. Jerry leaves, but the real threat has just arrived in the form of savior. Pete's paranoid delusions are nicely hinted at during his first night with Aggie, when he stops the conversation at the sound of a cricket. That chirping is discovered to be the dying battery of a smoke detector, a symbolic foreshadowing of things to come. But when Pete begins to find bugs in the bedsheets, bugs he identifies as aphids which are so small Aggie cannot see them, she never really questions his assertions and things spiral out of control so quickly it's a bit tough to believe she'd so completely become part of the madness, even given her established cocaine use and alcohol abuse. Still Judd and Shannon get into the moments, each feeding off of the other, and Shannon and Connick Jr. smoothly pass the baton as the arcs reverse, one from good towards a type of evil, the other evil towards a type of good. In production design, costume and makeup, "Bug" serves up the harsh realities of living on the sweaty, dusty fringe and the even harsher horrors of violence wrought by madness - this is no film for the squeamish. Friedkin's movie is a neat, one set actors' exercise with some nice writing that is undermined by shifting gears too suddenly.