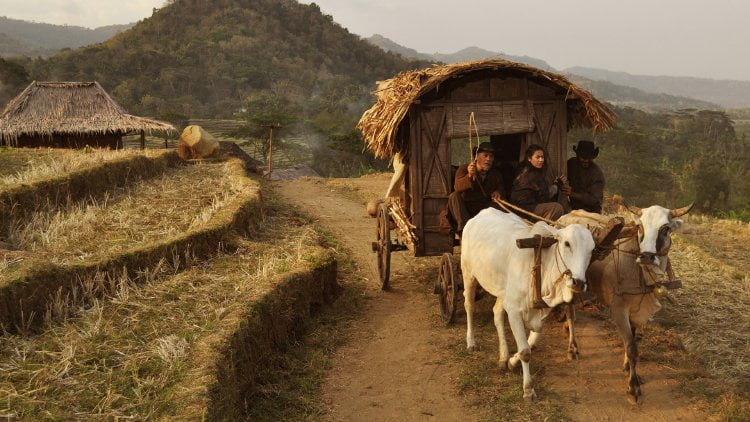 In 1880, Jamar (Ario Bayu) and Suwo (Yoshi Sudarso) were exiled to the American Wild West from their Java home after their father, the Sultan, was overthrown and murdered. These badass brothers, with their equally tough uncle (Tio Pakusadewo), return to their native land to right that terrible injustice in “Buffalo Boys.”

After the murder of their father, a sultan, by Dutch colonialists in the mid nineteenth century, Jamar (Ario Bayu) and Suwo (Yoshi Sudarso) flee to California under the care of their uncle, Arana (Tio Pakusadewo). After learning the skills of the Wild West, the trio return for revenge, but the suppression of their people by the murderous Captain Van Trach (Reinout Bussemaker) raises the stakes for the brothers who will become known as the "Buffalo Boys." It's a funny coincidence that two Southeast Asian Foreign Language submissions are for films that blend their own culture with the American Western (the other being Indonesia's "Marlina the Murderer in Four Acts"). Singapore's cowriter (with Raymond Lee)/director Mike Wiluan fumbles a bit with tone with a film that initially seems like a Jackie Chan vehicle before morphing into a brutally violent indictment of Dutch colonialism. He definitely has a talent for staging action scenes, though, the first half of his film the very definition of 'action packed.' Be prepared for fight scenes featuring chains, knives, swords, guns and just about anything else at hand, but be forewarned that the violence, especially against women, is disturbingly sadistic. Grade:

Producer turned debut action feature director/co-writer Mike Wiluan, with screenwriter Raymond Lee, did their homework in this Indonesian smashup between “The Seven Samurai” and “The Magnificent Seven.” And, it blends well this historical homage to American westerns and Asian martial arts films. The film begins aboard a train crossing the western American territories as Suwo and Jamar are attacked by a gang of nefarious bad guys. They dispatch them all in the first of the film’s many action scenes and shootouts. Jump six months later and Jamar, Suwo and their uncle Arana arrive in Java to avenge their late father. The East meets West story has our heroes lay down the gauntlet to defy the Dutch overlords, let by the dastardly Van Trach (Reinout Bussemaker), who have enslaved the villagers to grow the profitable opium poppies instead of the rice they need to survive. To this end, the Magnificent Three, with the help of buffalo-riding femme archer, Kiona (Pevita Pearce), take on the army of bad guys with an arsenal of firepower that boggles the mind. Of course, all of that armament, some of it fantastical, comes in to play in the extended shootouts, firefights and swordplay. As expected, good wins over evil and the charismatic and capable brothers ride off into the sunset…but, is that the end of their adventures?