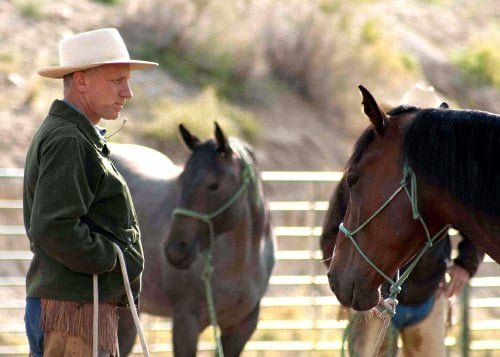 In 1998, Robert Redford's film, "The Horse Whisperer," was released. The film was based on a novel, but by the time they were finished shooting, Redford found that he had been so thoroughly influenced by the film's equine advisor, who had also accomplished with his own horse what the Hollywood trainers could not with their stunt horses, that his titular character may as well have been based on "Buck."

When he was just a young boy, Buck Brannaman and his elder brother appeared on television doing the rope tricks taught to them by their father, Ace, but Ace used abusive methods to raise and train his kids and after the lesions on Buck's back were by the school's football coach, they were removed to a foster home by the town sheriff. A shy man, Buck continued to follow his dream of becoming a cowboy but when he met Ray Hunt, who instilled a very different philosophy than the old Western concept of 'breaking' horses. Brannaman decided to follow in his footsteps. What is truly amazing about Buck is not only his ability to move beyond his horrific childhood but the strength he used to overcome his own shyness. He realized he had to come out of his shell if he was really going to become a successful teacher. Now he is not only entertaining to listen to (Buck teaches four day clinics using the type of hand free microphone developed by Kate Bush to perform in concert), but the wisdom he imparts applies not only to horses, but to any living being. Buck gets his students to look deep within themselves and to understand how their behavior impacts the animal they are trying to train. Understand and be sensitive to your horse and it will naturally come to trust and do what you want it to do. Cindy Meehl became a filmmaker because of Buck Brannaman's inspiration. She took one of his clinics then set up a production company and began traveling with him, eventually ending up with 300 hours of footage. She and her cinematographers (Luke Geissbuhler and Guy Mossman) have translated some of the grace of Buck's relationship with horses right into their images - the film begins with Buck on his horse, sidestepping across a grassy field and it is a thing of great beauty, horse and man in perfect balletic harmony within nature. The filmmakers emphasize the difficulty of life on the road for 9 months of the year. Buck drives all over the country, holding one four day clinic after another, and misses his wife and family. During the summer months, he's joined by his eldest daughter, a real natural, and her friend, who talk about getting in the way of Buck's way of doing things although the affection is more than evident. At one point, his wife and her many dogs arrive and the love story wafts off the screen. At eighty-eight minutes, the film does surprisingly begin to feel a little repetitive and the last major act, Buck's handling of a woman and her orphaned problem horse, is a bit muddled (the horse cannot be saved, having been improperly allowed to grow up among a pack of stud horses, but Buck's contention that the horse is not the problem but the owner is never really explained in this case, at least in a behavioral sense). Meehl is around to capture an astonishing bit of action when this horse attacks a trainer, and still Buck is able to get it into a trailer without using force. All one needs to do is see the old footage Meehl's included of a wild horse being broken to realize how much more sense Brannaman's methods make. Treat all living creatures with dignity and empathy, don't pull a horse, lead it with a slack rope, etc. Too bad Ace Brannaman never got a dose of Ray Hunt, but it is more than strongly suggested that it was his abusive treatment that allowed his son to look into the soul of a horse.