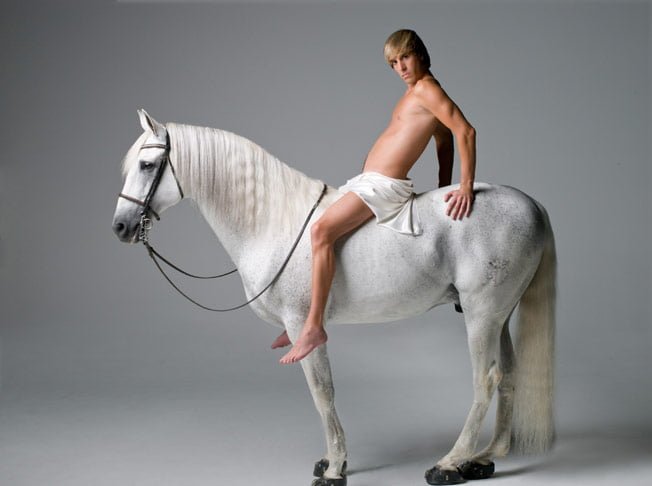 A flamboyantly gay fashion maven from Vienna has arrived to take the U.S. by storm. His name? Brüno.

After making a huge splash with "Borat," writer/star Sacha Baron Cohen has shed his body hair along with a lot of the coherence of his prior film to play Brüno. Sure there may be plenty of sexual outrageousness here, but not all of it is funny and a whole lot less of it seems either fresh or unstaged. Surprisingly, Brüno's quest to become a celebrity frequently fails to explain why cameras would be turned on him, most specifically in the film's third act when Brüno decides, that like Tom Cruise, John Travolta and Kevin Spacey, one must be straight to succeed in L.A. Worse, some of the exchanges which do not feel staged do not expose the punkee as much as the punker for bad behavior. As the successful host of Viennese pop culture show Funkyzeit, Brüno travels to a Milan fashion show in a one-of-a-kind Velcro suit and proceeds to inadvertently trash the place (one can hear cries of 'Brüno!' from the real audience as he hits the catwalk dragging along everything that has stuck to him). He's arrested, loses his job and decides that, as fashion is shallow and vacuous, he will move to L.A. and become a celebrity. He acquires a disbelieving agent (Lloyd Robinson of Studio A Management) and pours his life savings into a pilot where Brüno interviews A-list celebrities, but which, in essence features Brüno and a reality TV star discussing whether Jamie Lynn Spears' baby should be 'kept' or 'aborted,' a lot of crotch shots, a hilarious 2 second encounter with Harrison Ford, and a dancing penis which proclaims 'Brüno!' at show's end. A test panel audience is outraged and comment cards include critique like 'this show is worse than cancer.' After this fiasco, Brüno decides he needs to make a celebrity sex tape and confuses senior Republican presidential candidate Ron Paul with RuPaul (something I doubt Brüno would do) and Ron Paul's reaction proves two things - most people try to be polite even in extreme situations and when unwanted behavior is shoved in your face, declaring 'Something queer is going on here' is a perfectly legitimate response. The next idea is inspired by a visit to a seer who 'connects' Brüno with ex-lover Milli of Milli Vanilli (during which Brüno demonstrates a full complement of oral homosexual sex on the ghost of Milli - Baron Cohen knows no bounds). Found a charity and become famous! A team of twin bimbo charity PR agents (if these dumb as rocks women actually exist as a legitimate business, it says something really awful about L.A.) tell him Darfur is fashionable, but Brüno wants Darfive and so decides to create peace in 'the Middle Earth.' In addition to altercations with Palestinians and Hassidic Jews, Baron Cohen actually 'interviews' the head of terrorist group al-Aqsa Martyrs, the leading suicide bombing group. On the way back, he picks up a fashionable accessory on an African shopping trip - a black baby boy he names OJ - and the three set pieces which follow this - picking up the child from a baggage carousel, interviewing parents for a photo shoot, and an appearance on a Dallas talk show - are some of the film's truest and funniest. Then things take a radical downturn. It takes the press kit to explain the National Guard training sequence and we do not understand why a Swingers party is in progress with the 'heterosexual' Brüno's camera running. Brüno's presence with a group of hunters is also unexplained (unless it was arranged by the pastor trying to 'cure' him). In the final bit, 'Straight Eddie' (Brüno with muttonchops and camo-wear) emcees a cage fighting ring, but ends up in a clinch with ever loyal assistant Lutz (Gustaf Hammarsten). Setting up a bunch of drunk Arkansas rednecks out for some blood with a gay sex show is akin to inviting a gay audience to a film festival and showing them Nazi anti-gay propaganda films. Borat got some pretty uncomfortable and surprising behavior from people. Brüno shoots fish in a barrel. "Brüno" has its moments and one cannot help but admire Baron Cohen's chutzpah (anal bleaching? Running through an anti-gay demonstration chained and hand-cuffed to another nearly naked man?). Surprising, then, that Universal felt the need to excise a scene where Brüno begs MJ's phone number from Latoya Jackson.