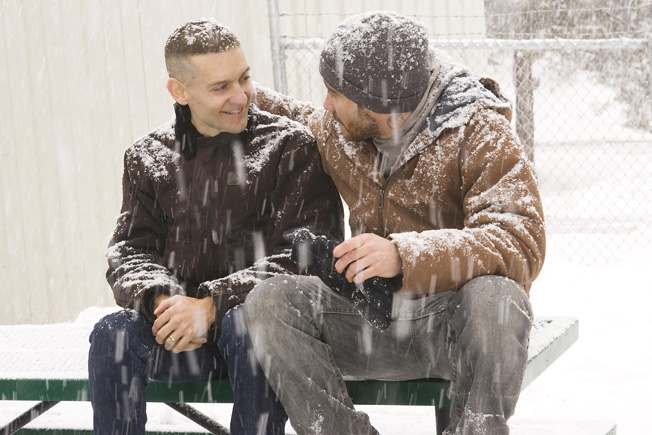 Captain Sam Cahill (Jake Gyllenhaal) is about to be redeployed to Afghanistan for another tour of duty. His wife, Grace (Natalie Portman), stoically stands by her man and, though not wanting him to go, supports his military career. His ne’er-do-well brother, Tommy (Toby Maguire), just released from prison, arrives on the scene and is nothing like straight-as-an-arrow Sam. Still, they are “Brothers.”

I was every bit as surprised by Irish director Jim Sheridan's ("My Left Foot," "In America") choice to remake Danish director's Susanne Bier 2005's motion picture "Brødre" as I was by Werner Herzog's reimagining of "Bad Lieutenant." "Brødre" could hardly be improved upon, but in transplanting the action from Denmark to Wisconsin via an extremely faithful adaptation by David Benioff ("25th Hour," "X-Men Origins: Wolverine"), if nothing else Sheridan will have both introduced this tale to U.S. audiences who missed the art house release and prove his uncanny ability to coax amazingly nuanced and naturalistic performances from young actors (two young girls, as it turns out, just like in his "In America"). I'll forgo a plot synopsis, as the film is almost identical to the original and my review for that film is linked here - http://www.reelingreviews.com/brothers.htm. The only noticeable change I detected was actually a bit of a lapse. In the original, the wife's kitchen is in mid-remodel, but cabinets, etc., are present in boxes. Here a younger brother with no money is able to get three contracting buddies ("My Name Is Earl's" Ethan Suplee, Arron Shiver and Ray Prewitt) to conduct a mysteriously financed overhaul. In Sheridan's version, Tobey Maguire ("Spider-Man") is Capt. Sam Cahill, the older brother and respected Marine who goes through hell to get back to his family while Jake Gyllenhaal ("Donnie Darko") is the younger brother just out of prison for robbing a bank. Not only are the two well matched as brothers, but Gyllenhaal even bears a resemblance to his Danish counterpart. Natalie Portman ("The Other Boleyn Girl") has the Connie Neilson role as Sam's wife and mother to Isabelle (Bailee Madison, "Phoebe in Wonderland") and Maggie (Taylor Geare, Natalie Portman's segment of "New York, I Love You"). Sam Shepard ("The Assassination of Jesse James by the Coward Robert Ford") is the hard drinking elder Cahill Hank and Mare Winningham ("Swing Vote") is the peace brokering stepmother Elsie. Sheridan does a beautiful job recreating small town America, one that's proximity to an Army base ties it directly to a far off war in Afghanistan, rendered with equal authenticity. The family resentments, assumptions and inter-dependencies all come through, as does Captain Cahill's heroism and ultimate betrayal of Private Joe Willis (Patrick Flueger, "The World's Fastest Indian") under capture by the Taliban. The complexity Sheridan inspires in the reactions of two little girls to the adult drama encircling them is one of the film's great joys and the entire cast is terrific, but - and there is rarely not a but with a remake - there are two slight bits of nuance that make the original superior and they have to do with the performances of the American leads. While Maguire will no doubt amaze with his portrayal of a man acting out out of guilt for a sin he does not know how to confess, Maguire wears his psycho a bit too much on his sleeve, his unravelling all too apparent via his bulge-eyed stare. Ulrich Thomsen's climatic explosion was all the more shocking for his relatively simmering restraint. In the opposite direction, Gyllenhaal, who really does do terrific work here, is a might softer than the rougher Nikolaj Lie Kaas was, his acceptance by his brother-in-law's previously wary family too swift and his crime too out of character. Still, had there not been performances to compare these to, there would be little to nothing to criticize. "Brothers" proves to be an altogether worthy remake of a top-notch film. Note Oscar front-running Carey Mulligan ("An Education") in a small role as Private Willis's wife and the always welcome Clifton Collins Jr. ("Sunshine Cleaning) as home base's Major Cavazos.

This is definitely a second tier animation effort by Disney Studios and one that I am not sure is clearly defined as to its target audience. “Brother Bear” starts off on a serious note as Kenai heads into the wilderness to find and, since he is heavily armed, kill the marauding bear. His brothers, being protective of their sibling, follow him and, in a frightening sequence, elder brother Denahi dies saving Kenai from the bear. Vengeful, Kenai hunts down the culprit for his brother’s death and, in turn, kills the bear. Through the magic of fairy tales and the Mouse House, Kenai is changed into a bear and now, so to speak, must walk a mile in another man’s shoes. Or, in another bear’s fur. Up until this point “Brother Bear” is a mostly serious story with some issues that may not be suitable for younger kids. And, herein lies the problem. Once Kenai is changed into The Bear the movie changes 180 degrees and becomes a lighthearted fish-out-of-water tale as the new bruin must get to the mountain where the sky touches the earth to become a man again. He meets a baby bear, Koda (Jeremy Suarez), who becomes his sidekick as they journey across the land until they reach the ”gathering” where all manner of bears meet to feed on salmon. (In truth, it looks like a Sandals resort for the bear in-crowd.) They are accompanied on their journey by a pair of moose, Tuke and Rutt (Dave Thomas and Rick Moranis), that have a striking resemblance of personality to the actors’ Bob and Doug McKenzie characters, right down to the fondness for a concoction containing warm, malted barley. This split in story styles and apparent age demographics is going to make “Brother Bear” a hard sell. The mirthful side, with the talking animals and anthropomorphizing of the forest critters – and this is what is presented in the trailers – is a definite draw for the kiddies. But, the serious story, which starts things off in an extended sequence long before the talking bears enter the picture, is the meat of the tale and is a bit too mature for the younger crowd. Animation is competent without breaking any new ground. Computer-generated animation is used, especially for water born bits, but the makers stick to 2-D cel animation for the most part.