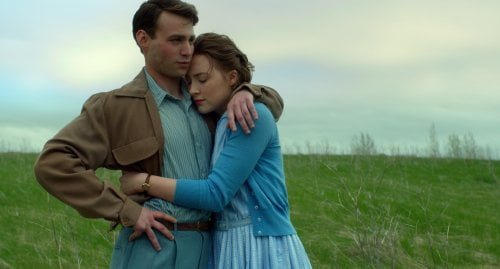 Most tales of immigration to the United States reach back to the turn of the century, but the post WWII years brought many more to the land of prosperity. My mother was one, a young Scottish woman who left her mother behind never to see her again, sailing across the Atlantic to become a bookkeeper and marry a man from a different culture. Many of her experiences are reflected here in John Crowley's ("Intermission," "Boy A") wondrous, achingly real film, one which explores the meaning of home and how our choices, taken and not, can greatly impact our lives. Saoirse Ronan is radiant as the good Catholic girl who blossoms in America yet pines for Ireland. As her Brooklyn suitor Tony Fiorello, Emory Cohen ("The Place Beyond the Pines") has found his breakout role while Domhnall Gleeson ("Ex Machina") counters with a quieter, deeply layered performance as the more cultured Irishman who hopes to win her hand. There are so many things at work in Nick Hornby's ("Wild") adaptation of Colm Tóibín’s novel. Small town life where everyone knows everyone, kept in line by the Church and the evil-tongued gossip that is Eilis's boss Miss 'Nettles' Kelly (Brid Brennan, "Shadow Dancer"), is established in the Irish set prologue. Mentoring is a consistent theme, Eilis guided by the loving hand of her selfless sister, taken under the wing of her worldly cabinmate during her crossing, trained in customer service skills by Miss Fortini (Jessica Paré, AMC's 'Mad Men') at the upscale Brooklyn department store that is her U.S. employer, outfitted and made up for a dance by giggling rooming house boarders Diana (Eve Macklin) and Patty (Emily Bett Rickards, TV's 'Arrow'), advised in affairs of the heat by widowed boarder Sheila (Nora-Jane Noone, "The Magdalene Sisters," "The Descent") and kept on a moral path by approving house owner Mrs. Kehoe (Julie Walters, Masterpiece's 'Indian Summers'). Eventually it is Eilis herself who becomes the mentor. But this sisterhood is only part of the story and Eilis often feels alone, initially overcome by homesickness despite moving to a neighborhood full of uprooted Irish. Kindly Father Flood gives comfort and signs her up for nighttime accounting classes where the young girl, the lone female in a class of men, excels, her success boosting her confidence. But the biggest hurdle is crossed when she meets Tony, an Italian American plumber who ventures outside of his own community to attend an Irish dance because he 'likes Irish girls.' The sweet young man is clearly thunderstruck, yet manages to charm with humor, gallantry and gentle persistence. Just as their relationship reaches a turning point, Eilis's world back home is shattered and she makes the decision to return temporarily to provide stabilizing comfort. Enniscorthy, though, has entirely different plans for the fashionable young woman who returns to them and Eilis finds herself seduced. There are countless moments of great beauty and melancholy, Crowley and his cast delicately applying just the right amount of emphasis to let the scene's emotions seep in, the strong sense of place in two entirely different worlds shading their meaning. Irish singer Iarla Ó Lionáird plays a homeless man whose rendition of 'Casadh an Tsúgáin' at a Christmas charity dinner may bring a tear to more than Eilis's eye. Eilis's first trip to crowded Coney Island bubbles with a country's promise whereas a subsequent trip to the wild, barren Irish coast encompasses a longing for one's roots. There is vast empty space in Long Island, too, where Tony shows Eilis the land his family has purchased and his words conjure up a boisterous future of wealth and happiness on the horizon, just as Jim's family's stone cottage signals quieter peace and contentment. New York has the Dodgers, Ireland its football club. There are parallels every step of the way but Crowley's deft hand doesn't make them obvious, the irony of Eilis's new opportunities back where she began never voiced. Ronan has quite an arc, a shy obedient girl turning into an independent young woman, her inner glow sparked by life experience. The young actress is capable of letting us into Eilis's thoughts without speaking a word (just watch her eating alone in the ship's dining hall, comprehension slowly creeping in). Cohen is the film's joyous heart, his adoration of Eilis palpable. He's like a sunnier Terry Malloy, the actor even resembling the young Brando (and in fact, Cohen partially based his performance on "On the Waterfront"). Given his beginning in the "Harry Potter" films, it has been a pleasure watching Gleeson grow as an actor and his wistful performance here is perhaps his finest to date. Veterans Walters and Broadbent provide home away from it as the authoritarian maternal and kindly paternal figures while newcomer James Digiacomo embodies the brash exuberance of the New World as Tony's impish little brother. There isn't a wrong moment in "Brooklyn," a film to get lost in, to mull over. To experience it is like revisiting old family photographs or snuggling up on a cold day with a good book. Grade: