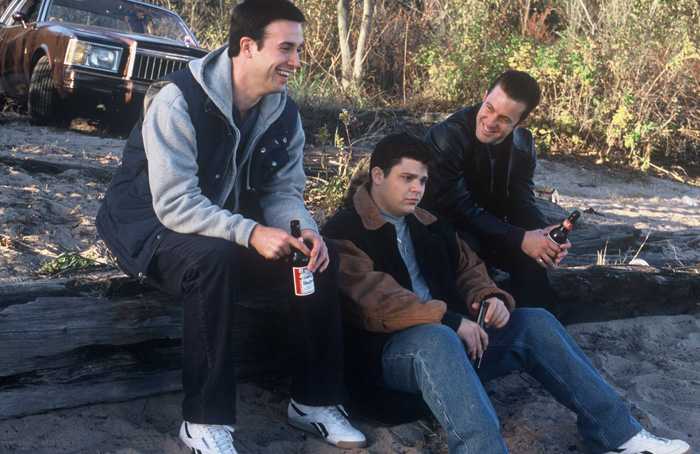 Michael (Freddie Prinze, Jr.), Bobby (Jerry Ferrara) and Carmine (Scott Caan) have been best friends since they were kids. After growing up, they have gone their own ways but have always stayed close buddies. It is the 80’s and Mafia violence rears its ugly head in a big way in New York City and it will affect the friendship and lives of the three young men in Brooklyn Rules.”

Three best friends, our narrator, regular neighborhood guy with college aspirations Michael (Freddie Prinze Jr., "Scooby Doo 2: Monsters Unleashed"), the sweet but cheap Bobby (Jerry Ferrara, "Entourage's" Turtle) and the great but incredibly vain Carmine (Scott Caan, "Ocean's Twelve") grow together into the 1980's on the fringes of the shadows cast by the mob who enforce "Brooklyn Rules." "Sopranos" writer Terence Winter and Rhode Island director Michael Corrente ("Federal Hill," "Outside Providence") serve up such an obvious cross of "Goodfellas" and "Diner" that one's first reaction is to merely scoff at the film, but then something interesting happens. Prinze Jr., Caan and Ferrara forge such believable bonds of friendship that even though the film they're in is pure derivation, it becomes enjoyable to watch. Throw in Alec Baldwin as the local mob king and it becomes good enough that even a clueless performance from Mena Suvari ("Domino," "Factory Girl") as Michael's uptown girlfriend doesn't bring it down. From the constant narration to the Catholic rituals and young impressionable brushes with the mob, it's clear "Goodfellas" provides the bones, if not the meat, of "Brooklyn," but even though Michael's oration doesn't hold a candle to Henry Hill's, Winter gives his boys enough snappy repartee to keep the actors engaged and entertaining. It's clear Carmine will be seduced by the gangsters's flash, something that will repel Michael and impress Bobby while also providing a gateway between two ways of life. Baldwin provides true menace, but also a paternalism, a psycho slasher (there is a gruesome scene involving a deli meat cutter) who nonetheless watches over his hood. And while Baldwin is gold plated in these types of roles, the surprise here is Prinze Jr., who not only holds his own with the more experienced actor, but shoulders the film while engaging our sympathy. Yeah, "Brooklyn Rules" is often obvious (a local beach is the scene of not one, but two events matched in child and adulthood) and its tragic climax is not only overtly telegraphed but too easily dismissed in the film's feel good coda, but the central friendship feels true and the trio who compose it are engaging company.

Brooklyn Rules” begins with the strains of the Rolling Stones’ “Sympathy for the Devil,” which gave me pause since Martin Scorcese has used that song to death in “Goodfellas” and “The Departed.” I thought, at first, that this derivativeness (it also holds ties to “A Bronx Tale”) was going to be status quo for director Michael Corrente, who made the 1999 original, Outside Providence.” As “Rules” unrolls, however, the screenplay and the chemistry between its three stars takes hold. Michael is in college, working part time in a neighborhood butcher shop. Bobby is in a committed relationship and is always looking for a bargain or a deal. Carmine, though, eschews the straight life and is involved with the local Mafia don, Caesar (Alec Baldwin). Each has gone there separate ways but they are still the closest of friends. One day, Michael has a run in with one of Carmine’s mob cronies, Gino (Christian Maelen), and seeks the help of Carmine’s boss, Caesar, to intercede. By 1985, New York City became a mafia hotspot. One of the mob family kingpins, Paul Castellano, was gunned down on the streets of Manhattan under the orders of boss John Goti. Instead of defusing the explosive internal syndicate situation, a full-scale war breaks out, with Brooklyn smack dab in the middle of it. The war, and the turmoil it causes, will involve the three friends in ways they do not expect. For all of the outward derivation of “Brooklyn Rules,” it is an entertaining buddy film blessed with sharp, often funny dialogue and solid performances from its principal cast – well, except Mina Suvari as Michael’s college sweetheart, Ellen (better casting would have helped here). Most surprising is Freddie Prinze, Jr., as Michael. This is easily the best, most grounded thesping that I have ever seen from the actor and his performance is a pleasure to watch. Jerry Ferrara, whom we know best as Turtle in the TV series Entourage,” is funny and engaging as the always-looking-for-deal Bobby. Scott Caan, too, hits the mark as Carmine. Alec Baldwin wears his mobster persona like a cloak and chomps heartily on the scenery. Family, friends and gangland cohorts are well cast. Brooklyn Rules” has style, wit and good humor mixed in with the drama and pathos of the time. Violence was an always-present possibility on New York’s mean street and helmer Corrente brings it to the doorstep of our three heroes. It helps that these three heroes are likable blokes, too. It makes you invest yourself in the characters and story.