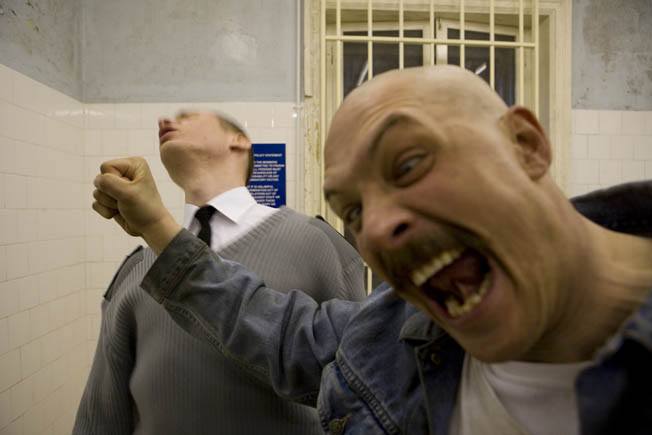 1974 was a tough time to be young in England, only more so for young Michael Peterson (William Darke) whose everyday life is a battle – literally. Fighting his way through life, the youngster grows into a brawler whose fists would make him the most violent prisoner in Britain and earning him the moniker, “Bronson.”

In 1974, Michael Peterson (Tom Hardy, "Layer Cake," "RocknRolla") landed in jail for 7 years for the armed robbery of a post office. Since then, he has been tossed around the English penal system for thirty-four years, thirty of them in solitary confinement. When he was let out for 68 days in 1988, boxing promoter Paul Daniels (Matt King, "RocknRolla") tried to trade in on his notoriety and renamed him for the tough guy Hollywood star of the "Death Wish" movies. Mickey would forever after be known as "Bronson." Cowriter (with Norman Brock)/director Nicolas Winding Refn ("The Pusher" trilogy) takes an experimental approach to the biopic, letting his subject guide the way through his life so far as if it were a piece of performance art. Refn gives his film a larky tone that often recalls "A Clockwork Orange" as Hardy flips back and forth from addressing the camera, often made up and from a stage, and acting out scenes from Peterson's life. These include a drugged stint in an asylum, taking prison guards hostage, a brief underground boxing career, tea with mum and the unsuccessful wooing of a stripper which paints Peterson a pussycat. If violent rage were an indicator of intelligence, Bronson would be a genius, but Refn would have us believe that all that bottled up animosity was due to the festering need to produce art. Once an Art Teacher (James Lance) comes on the scene, Bronson becomes celebrated for more than his prison antics (and indeed, the drawings shown, sometimes animated, look like the naive work of someone like Crumb). Hardy gives a hearty performance and Refn takes artistic chances, but "Bronson" never really succeeds in getting under the skin of the man. It's an odd little film about Great Britain's most famous (and expensive) prisoner which suggests the absurdity on both sides.

Nicolas Winding Refn (who wrote and directed the violent “Pusher” trilogy) brings us the story of the man who has alternately tagged as “the most violent prisoner in Britain” and “the most expensive prisoner in Britain” – his violent series of actions in prison cost the British government millions of pounds. Co-scribing with Brock Norman Brock, Refn chronicles the exploits of Michael Petersen from his early days as a bare-knuckle boxer, his attempt to wealth by robbing a post office (for less than 30 pounds) and his subsequent 7-year sentence to prison. Once in prison, Peterson makes a name for himself as an unremitting, violent inmate who has no problem beating the snot out of his guards, taking other prisoners, guards and civilians hostage and destroying vast amounts of prison property. His bloody exploits earn him 34 years prison time, 30 years of which were spent in solitary confinement. Despite the liberties Refn takes with the now named Charlie Bronson’s life, the story is remarkable in its violence and surprising that the man never killed anyone. At present, he is still in prison with little prospect for parole. Tom Hardy gives a near tour-de-force performance, capturing Bronson’s physically daunting attitudes to his captors and the system in general. Hardy has the imposing physique to make his outrageous and violent attacks believable. If the filmmaker is true to Bronson’s story, the man would readily and unhesitatingly take on four or five prison guards at a time, giving as good, if not better, than he gets. The actor, with his outrageous persona, gives a notable, over the top, performance. The supporting cast is overshadowed by the film’s star, making “Bronson” a one-hander. Production techs are interesting, giving variation to all the prisons/asylums that have been Bronson’s “home” for over 30 years. (Michael Peterson has been a guest of the government in over 120 different penal institutions across Britain during his long incarceration.) The fantasy sequences, where Charlie entertains a faceless audience, are interesting, though they sometimes wrench the viewer from the film’s flow. “Bronson” is not a great film but garners a strong performance from its star.