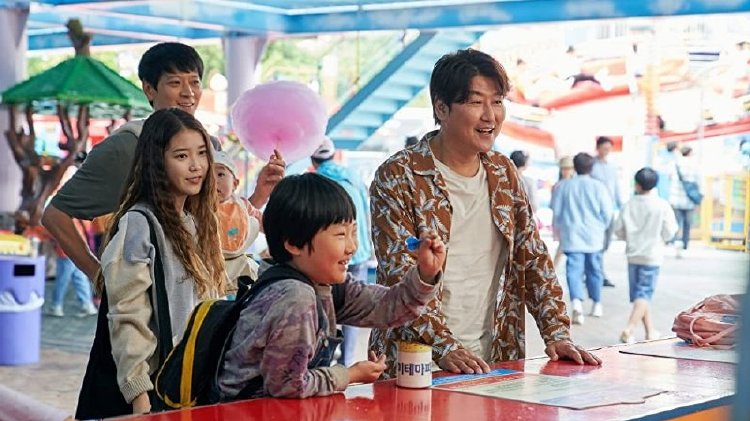 When a distraught So-young (Ji-eun Lee) drops off her baby at the Busan Family Church, she leaves a note saying she’ll be back.  What she doesn’t know is that only 1 in 40 who do this actually return, that two female cops have her under surveillance and that the church worker, Dong-soo (Dong-won Gang), who monitors the ‘baby box’ is in cahoots with Sang-hyeon ("Parasite's" Song Kang-ho), a baby “Broker.”

Kore-eda’s filmography is full of films about the travails of children amid broken families, from 2004’s heartbreaking “Nobody Knows” to 2011’s whimsical tale of separated brothers “I Wish” to the three adult sisters discovering their teenaged step-sister in 2015’s sublime “Our Little Sister.”  Arriving on the heels of his Cannes winning “Shoplifters,” writer/director Hirokazu Kore-eda’s ("Nobody Knows") latest may feel familiar, both films dealing with an unwanted child being loved by a makeshift family on the wrong side of the law.  But where “Shoplifters” dealt with everyday survival, “Broker” is more of a road movie adventure with a more patchwork cast of characters.  It is looser and more rambling, touching and funny.

When So-young returns for her child, she’s given a pitch by the duo who call themselves The Stork Twins, reassuring her a good home will be found for her baby along with a significant cut for herself.  But when the three meet with a couple who’ve agreed to pay 10 million won (around $8K), the husband’s remarks about the infant’s eyebrows and mother’s consensus that It isn’t that cute cause So-young to erupt, indignant that anyone would try to literally discount Woo-sung (Ji-yong Park).

This will be the first of many interrupted sales observed by detectives Soo-jin (Bae Doona, "The Host," "Cloud Atlas") and Lee (Lee Joo-young), the female cops who’ve tailed them from the church to Sang-hyeon’s laundry to the road in hopes of a red-handed arrest.  Soo-jin’s single-minded focus on her mission (she rather comically dismisses her husband when he brings the pair food and fresh clothes at a stake-out) suggests something personal may be motivating her.

Dong-soo’s insistence at stopping at an orphanage where he’s very popular with the kids tells us all we need to know about his own past and adds another member to the makeshift family when they discover precocious Hae-jin (Seung-soo Im) has stowed away in their laundry van.           This little tyke turns a trip through the car wash into a hilarious misadventure and a Ferris wheel ride into a moving emotional journey.  So-young’s sad story offers a rationale for her actions, but Sang-hyeon’s may be the saddest and most mysterious of all.

The ensemble is beautifully modulated, Kore-eda attaining a harmonious balance among his individually pitched actors.  Cinematographer Hong Kyung-pyo’s ("The Wailing," "Parasite") work is pretty straightforward, occasional poetic touches, like the exquisite opening shot of rain pouring down the pitched alley between tall, narrow buildings and the beautifully framed scene of Dong-soo and Sang-hyeon kicking a can back and forth at night by the sea, city lights twinkling behind them, adding artful emotion.

This one meanders a bit, but its characters linger.  Kore-eda’s artful mix of melancholy and humor is on full display in “Broker,” in which he posits it takes a village to raise a child, just maybe not, in the end, with the villagers we expect.

A young woman, So-young (Ji-eun Lee), makes the toughest decision and brings her newborn baby to a local church for adoption. Things are not quite right when the baby is clandestinely taken by two men. She follows them and learns they are selling babies on the black market and there are two cops on their trail in “Broker.”

Writer-director Hirokazu Koreeda places his story in South Korea and in the business of illegal baby trafficking. Some of the churches in that country have Baby Boxes placed outside to allow the child to be anonymously given up for adoption. Enterprising entrepreneurs Sang-hyen (Song Kang-ho) Dong-soo (Dong-won Gang) use the secretive drop offs to occasionally pilfer a kid and sell it to wealthy “adoptive parents.” Dong-soo erases the surveillance tapes to hide the crimes.

When So-young uncovers the schemers plot, she does not turn them in. Instead, she joins them on the baby brokerage deal to ensure her child gets a good and loving mom and dad. This is what I like most about “Broker,” the dynamic that slowly develops in this little family drama about love and caring, in a very odd and original way.

I like the metaphorical journey these rogue characters take in their quest to find a proper home for So-young’s baby. You do not cast judgment on her and, though they are in a sordid business, on the traffickers. Instead, I want the tiny family unit to work and have a happily ever after ending for an oddly engaging movie. The two cops stuff, though, feels tacked on and unnecessary.