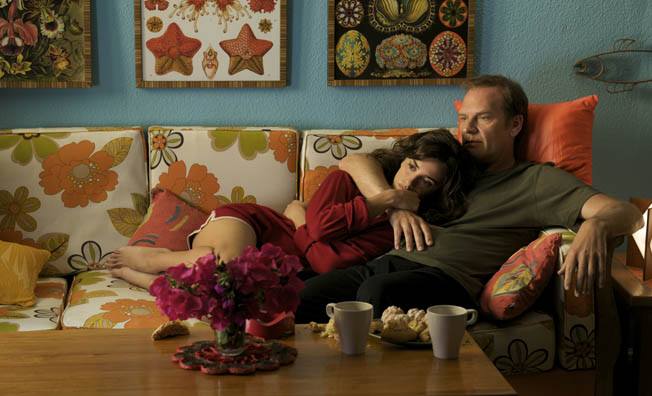 Writer/director Pedro Almodóvar ("Talk to Her," "Volver") doubles down on his twisty tale that reverberates with biographical touching points. Almodóvar's muse, Penélope Cruz, is stunning, sexy and touching as Lena, once Severine, a dreamlike flash back in this tale where everyone has an alter ego and most actions have a parallel. Almodóvar's usually diverse production palette is all Valentino red here and he also departs Madrid for Spain's Canary Islands for his Hitchcockian story's climactic event. "Broken Embraces" isn't as finely tuned as Almodóvar classics like "Women on the Verge of a Nervous Breakdown," which "Girls and Suitcases" is clearly covering, but fans of the director's work will find much to indulge in. When we first meet him in 2008, director Paralelas (Spanish for parallel) is now blind screenwriter Harry Caine, who still has a way with the casting couch. His agent, Judit García (Blanca Portillo, "Volver"), arrives to observe him dressing and sarcastically asks if there will be an encore, before pressing him for a rewrite on his current project, which her son, Diego (Tamar Novas, "The Sea Inside," "Goya's Ghosts"), is assisting him with. Harry tells Judit that Ernesto Martel has died and a grave look passes between the two before we flash back to 1992, where we learn of Lena, the corrupt corporate giant's secretary, who rejects him as a client in her 'Severine' call girl guise only to become his mistress when she is indebted by his care for her father as he dies of cancer. Back in the present, Harry tells Judit that he wants to write a screenplay based on Arthur Miller's son, a boy born with Down's Syndrome who was rejected by his famous father, but who embraced his father in adulthood after Miller gave a speech championing the handicapped. Cue the arrival of Ray X (Rubén Ochandiano, "The Weakness of the Bolshevik," "Che: Part Two"), an aspiring director who wants Caine to write a screenplay about a son who takes revenge on his father after grappling with his own homosexuality and whose voice gives Caine the nagging feeling that he's 'seen' him before. Flashing back to 1994, all these story strands begin to dissect when Caine casts Lena in his film and a jealous Ernesto (José Luis Gómez, "Goya's Ghosts") insists his son be present to document everything that happens on the set on video. Almodóvar has a field day jumping from past to present, setting parallel story strands in motion and having events which happen to his characters pop up in his film within a film. Everyone seems to have an alter ego - even Diego's script pitch to Harry involves vampires who pass as humans by using special suncream and Lena's screen tests involve a dizzying procession of wigs, the more for Almodóvar to frame Cruz's luscious looks. "Women on the Verge" is immediately evoked as the first scene we see being shot involves Cruz making gazpacho (a teardrop falling on a ripe tomato!). Later on, "Women's" distinctive Rossy de Palma cameos. Production design, always a delicious aspect of this director's films, features fabulous art works (an oversize still life of oranges dominates Ernesto's dining table while Warholian guns point at Lena entering a room), spiral staircases and an almost copy of "Women's" Madrid apartment set complete with accentuated balcony. In addition to Diego's vampire tale, "The Mummy" is evoked in a lovemaking scene(!), then echoed in the death of one of its participants. Alberto Iglesias's ("Volver," "The Kite Runner") score recalls Bernard Herrmann ("Psycho," "Vertigo"). "Broken Embraces" explores the creative process from many angles - one character finds redemption by having saved precious negative - while giving Cruz the spotlight as a tragic romantic heroine. But it's Lluís Homar, who resembles a dialed down Kelsey Grammer, who gives the film its center.

Harry Caine (Lluis Homar) is blind, a screenwriter and not whom he seems to be. In another life, when he could still see, he was known as Mateo Blanco, a filmmaker of some repute. Fate, though, took his sight and the love of his life, Lena (Penelope Cruz) in “Broken Embraces.” Helmer Pedro Almodovar joins his muse, Penelope Cruz, once again in his tale of duality, one past the other present, of a man whose life and very being is changed by a tragic car accident. Done in deft flash back and forward, Almodovar, who wrote the script, creates two different people in the same man. Almodovar has always had a knack at creating characters of full dimension. His characters are complex and passionate and “Broken Embraces” continues showing the filmmaker’s talent in creating believable people. That he is also a first-rate director does not hurt things. His actors, as usual, give rich performances and create the persona of their characters. Lluis Homar is terrific playing two very different men residing in the same body. As Mateo, the film auteur is self-assured, almost arrogant. When he became sightless Harry, he gained humility and sensitivity. The use of flash back and forward allow the viewer to se the two characters side by side and the difference between them is palpable. Penelope Cruz, as always, gives her all as Lena, whether radiating her beautiful smile or having a breakdown. This is not as much an “Amoldovar” film as his wonderful “Women on the Verge of a Nervous Breakdown” or “Volver,” but he is always an interesting filmmaker to watch.