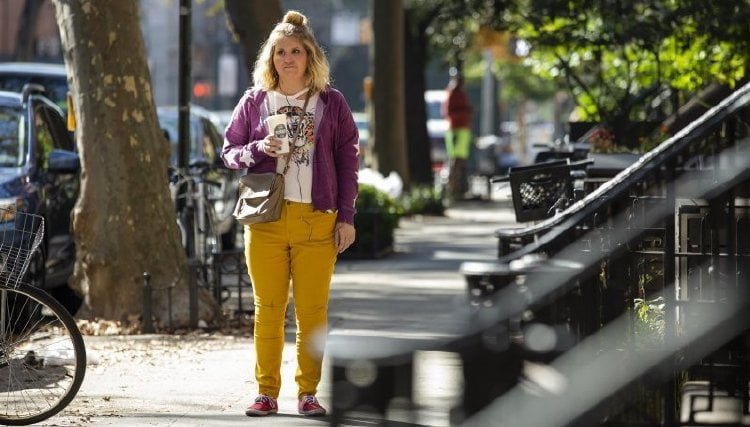 At 27, good time girl Brittany Forgler (Jillian Bell, "22 Jump Street") gets a wake-up call when her quest to score Adderall from Doctor Falloway (Patch Darragh) turns into a dire health warning. The 'fat friend' of her slim roommate and supposed best friend Gretchen (Alice Lee) gets the opposite of support at home, but the daily runner upstairs they've dubbed 'Moneybags Martha' (Michaela Watkins) understands the younger woman's distress better than she does herself. After accepting new friends, a new love and finally, help, "Brittany Runs a Marathon."

Writer/director Paul Downs Colaizzo makes his feature film debut with a story based upon his own Brittany, a best friend much like his title character who, sliding into debt and drinking too much, turned her life around in her late twenties by setting a goal of running the NYC marathon. He's found his perfect star in Jillian Bell, an actress who not only lost the same amount of weight as her character in preparation for the role, but one who has proven she was more than ready to step up from supporting roles that proved her comedic chops into a dramatic lead leavened with humor. And Bell is supported here by a well cast ensemble from Tony nominee Micah Stock as Seth, a new running friend, to Utkarsh Ambudkar of TV's 'Brockmire' and 'The Mindy Project,' perfection as an unconventional romantic interest. Dependable character actress Watkins gives a hugely compassionate and sympathetic portrayal of a misunderstood woman while Lee humanizes what in lesser hands would be the 'bitch' role with unspoken moments of self reflection. Brittany is eternally racing for subway trains whose doors close in front of her and shirking responsibility with comic antics. When her friend and theater boss Shannon (Jennifer Dundas) confronts Brittany about her perpetual lateness and how it impacts her coworkers, Brittany's response is to put on a British accent or impersonate "Babe in the City." Call it the Rebel Wilson reflex. After Falloway's diagnosis, Brittany, shocked by the cost of gym membership, prepares herself for a neighborhood run, but quickly retreats until Catherine (aka 'Moneybags Martha'), knocking on Brittany's door when she hears her sobbing, urges her forward by recommending bite size goals. Soon her brother-in-law Demetrius ("Get Out's" Lil Rel Howery) is feigning shock at her athletically induced sweat during Skype sessions from Philadelphia. Brittany lucks into an easy income stream when one of her failed interviews results in a referral for a dog and house sitting gig on the Upper East Side. When she realizes her night shift counterpart, Jern (Ambudkar), is crashing at the fashionable townhouse, Brittany moves in as well, tired of Gretchen's undermining. What begins as bickering turns into friendship, then something more, but an unexpected setback sends Brittany reeling and she flees back to Philadelphia and her sister Cici (Kate Arrington). Colaizzo employs an extremely personal visual style, extreme close-ups of his protagonist keeping us in her physical space. The playwright's screenplay illuminates a defensive psychology, Brittany initially using comedy as a shield, then becoming hurtful rejecting help over pride. This is particularly acute in her relationship with Catherine, a woman whose problems are far more devastating but unseen because of initial perceptions, Seth acting as a counterweight between them. Also well articulated is the film's romance, Brittany rejecting the very tendencies in Jern which had held her back before realizing that, unlike Gretchen, he has her back. It is a mutually rewarding relationship allowed to develop outside Hollywood dictates. The film presents New York City realistically, Brittany's cramped apartment a young Everywoman's, her Upper East Side squat exuding moneyed taste and space. Bell's hair, makeup and costuming shares a similar arc, loud and fussy toning down into sleeker and more neutral. The production was the first allowed to shoot during the marathon, animated maps our GPS. If the film has a drawback, it is in editing and pacing, scenes often ending abruptly yet the film seeming longer than its running time. "Brittany Runs a Marathon" is a dramedy with a keen sense of its flawed heroine and her surroundings. It's inspirational yet never cloying. Grade: