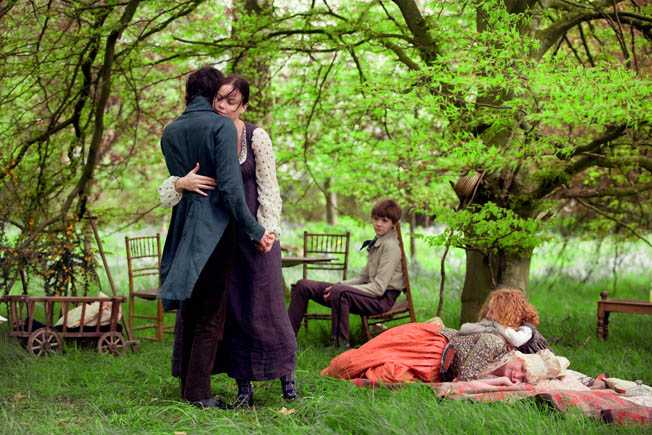 1818, London. Handsome young poet, John Keats (Ben Whitshaw), begins a romance with girl-next-door Fanny Brawne (Abbie Cornish), a fashion-conscious young woman who has a deft flair with a needle. His impoverished state prevents him from asking her hand in marriage but this cannot stop their romance from blooming. Mortality, though, can in “Bright Star.”

With "Bright Star," writer/director Jane Campion has made a film that is like a flip, 'civilized,' version of "The Piano's" exotic wilderness. Both feature a strong woman who must buckle under to society's idea of whom she should marry. Both feature a man, connected by trade to the male marital interest, who would break up that marriage. Both feature a clandestine love affair witnessed by a small girl related to the woman. Both feature the arts - music, of course, in "The Piano," and poetry and fashion design in "Bright Star." Both are period pieces. What "Bright Star" lacks is "The Piano's" overt eroticism. In telling the doomed romance between Romantic poet John Keats (Ben Whishaw, "Perfume: The Story of a Murderer," "I'm Not There"), who died of tuberculosis at the twenty-five, and his next door neighbor Fanny Brawne (Abbie Cornish, "Somersault," "Stop-Loss"), Campion uses subtler means - clasped hands, a gentle kiss, a symbolic breeze blowing over Brawne's supine body. Like the fictional Ada, Fanny was a bright and headstrong woman whose talent lay in designing dresses and accessories. She found Keats' best friend, the Scottish poet Charles Armitage Brown (Paul Schneider, "All the Real Girls," TV's "Parks and Recreation, in a revelatory performance that should be noted at year's end), to be a boor and he thought her an airhead (his physicality is that of George Baines, albeit clothed in tartan, and his manners do not preclude impregnating the housemaid). Fanny wrestled with learning poetry, which Keats could only instruct her to immerse herself in. Whishaw is a frail romantic, with dark circles under his eyes which foreshadow his doom. Campion's "An Angel at My Table" star, Kerry Fox, is mesmerizing in her quiet maternal performance as the widowed Mrs. Brawne, won over by the love she sees between her daughter and neighbor. Like young Anna Paquin's Flora, Edie Martin is a scene stealer as Toots, Fanny's much younger beloved sister. 'Did you eat rosebuds again?' inquires John, delighting in the blush on her cheeks. Campion's production is sterling, resisting Hollywood's tendency to sterilize older times. Her's is a London neighborhood of dirt pathways and dank kitchens and heroines wearing no makeup. She beautifies the film with the glories of nature - fields of flowers, a butterfly farm bred in Fanny's bedroom. Fanny's stitchery shows great talent, and yet is rooted in its time, not costumey at all. If "Bright Star" has a fault, it is not the restraint that the time puts upon its love affair, but rather a weak denouement. After a piercing display of grief from Cornish, Campion folds with a recitation of the titular poem as Fanny walks outside, giving way to title cards which relate her fate. It is an uncinematic end, a trailing off as it were, to the tale of a Romantic poet and his muse.

Animation maestro Gabor Csupo teams with scribes David L. Paterson and Jeff Stockwell to adapt children’s author Katherine Paterson’s tale about friendship, trust and imagination. The result, the first live action work by Csupo, is an intelligent young person’s story that will have strong appeal to older kids – and adults, too, I think – as it eschews poke-you-in-the-eye FX in favor of subtle CGI. It’s the story of two friends and the bond that develops in their mutual imaginings of the kingdom of Terabithia and all of its wondrous creatures. From giant trolls to tiny warrior faeries, the two kids invent a world where they must battle the Dark Master and his evil minion to save their fantasy world. This is a richly drawn story that is not just about imagination. It deals with real things that kids must face, like schoolyard bullies and being an outsider. Katherine Paterson’s story pulls no punches when a chance to go on an adventure, without Leslie, ends in disaster for Jess, I’ll say no more than that because I don’t want to blow it for those of us not familiar with the tale. The two young leads, Hutcherson and Robb, are perfectly cast as Jess and Leslie, giving their characters real personalities to go along with their vivid imaginations. Robb, in particular, has a great deal of screen presence, reminding me of a young Winona Ryder. The supporting cast is sparse with only Robert Patrick, as Jess’s father, and Zooey Deschanel, as school music teacher, Miss Edmonds, giving much by way of background characters. But, “Bridge to Terabithia” is about the value of imagination and that is where Csupo and company put it up. Special F/X are there to be seen but they are organic to the story and don’t call attention to them. They are part of the imaginings of two kids with sound and music used to evoke impressions instead of hit-you-over-the-head CGI. The team of filmmakers maintains a sound and steady balance of live action and effects. Bridge to Terabithia” is a gem of a movie that is coming out at a time when we are usually saddled with Hollywood’s dregs. It has something for kids of all ages, though the very young might kind it too scary, and deserves to be seen on the big screen. But, it is such an enduring and endearing story, it should have some good legs in the ancillary markets, too. This is a smartly done and intelligent film.