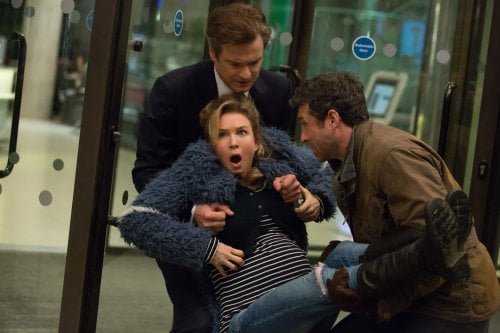 Bridget Jones (Renée Zellweger) is now at her ideal weight and the producer of a major news show, but on the evening of her 43rd birthday, she finds herself alone. Her anchor Miranda (Sarah Solemani, "Mrs Henderson Presents") knows just the right antidote and packs her up to spend a debauched weekend at a music festival where Bridget meets an American, Jack Qwant (Patrick Dempsey). One week later, a run-in with her ex, Mark Darcy (Colin Firth), relights their old passion. So, just who's the father of "Bridget Jones's Baby?"

After the bad misstep that was "Bridget Jones: The Edge of Reason," original director (and novelist) Sharon Maguire returns with a script written with Emma Thompson and "Borat's" Dan Mazer. With its romcom cliches and obvious pratfalls, it may not have the sparkle of the original film, but it is an endearing return, the aging of its main cast bathing it in sentimental nostalgia. Things kick off with a humorously unexpected note as Bridget attends the funeral of Darcy's rival Daniel Cleaver (Hugh Grant) along with 'the Eastern European modeling community,' Bridget's cherished anecdote repeated again and again during his memorial. This Bridget is as awkward and klutzy as ever, but her eating and drinking have been greatly curbed and she's finally enjoying career success on her own terms. But her old buddies, Shazzer (sally Phillips), Tom (James Callis) and Jude (Shirley Henderson) are all parents now and so she finds herself a singleton adrift. At the outdoor music festival, Bridget wastes no time face planting into a muddy bog, rescued by the immediately interested Jack, but he appears to be a distant one night stand when she bumps into Darcy at a children's party and learns his marriage to Camilla (a name that now literally equates him to a prince) is at an end. Darcy's never gotten over her and they quickly fall into each others' arms. But when Bridget gets nauseous at work and Dr. Rawlings (Emma Thompson, stealing every scene she's in) confirms a 'senior' pregnancy, she has no idea which man is the father. Finding Jack proves pretty easy considering he's a very rich and well known love guru. Bridget books him on her show, her makeup artist (Joanna Scanlan, "The Invisible Woman") tasked with getting a DNA sample, but while hiding in the control room an ill-timed phone call is misinterpreted as cues by Miranda and the odd line of questioning draws Jack's attention to the booth. Turns out the charming American in love with the idea of fathering a child with the wacky Englishwoman. But so is the repressed Darcy and Bridget doesn't have the nerve to tell one about the other. Meanwhile Mum (Gemma Jones) is in a dither over how to handle a single pregnant daughter while running for estate council and a new boss is demanding radical high tech changes to Bridget's Hard News program. Sure, the film's a fairy tale, especially given Jack's sterling character and immediate devotion (the better to roil Mark's stiff-upper-lipped reserve). In the world of romantic comedies, though, there is always that third act obstacle, and the writers have used it well, an upper hand achieved with lowered integrity. The production has been updated to suit the times while preserving character, Bridget's apartment and wardrobe upscaled if still a bit off. Zellweger slips back into the role like a well worn glove (Owen Glieberman's infamous essay about her changed looks greatly exaggerated). While falling into mud may not be the most unique bit of comedy, the actress's timing is impeccable, proven in a far more elaborate stunt in the film's funniest scene. Firth, too, is an older, wiser version of his character, yet still visibly suffering the lack of his mismatched love. Solemani is a great new comic foil, more daring as befits Bridget's new world. Jim Broadbent returns as Bridget's dad (and yes, Mum throws her inevitable Christmas party). Singer-songwriter Ed Sheeran gamely cameos as his unrecognized self. "Bridget Jones's Baby" marks the second British female-driven comedy to return from a long hiatus in 2016 and surprisingly it's the one that's toned down the imbibing that's come up the winner. Grade:

It is Bridget’s (Renee Zellweger) 43rd birthday and she is celebrating it alone. She had broken up with Mark Darcy (Colin Firth) and has been out of the dating game for a while. She spends a glamping weekend with her girl friend where she meets Jack (Patrick Dempsey). Hanky panky ensues. Then she finds out that Mark still loves her and there is more hanky panky. Then, she finds out she is pregnant and must determine which one is the father of “Bridget Jones’s Baby.” “Bridget Jones Diary (2001)” was an amusing little rom-com about a year in the life of the title character. It was a fluff piece of work but hit the right buttons for the twenty-something audience it was aimed at. Three years later, the first of the BJ sequels, “Bridget Jones: The Edge of Reason” was thrust upon the unsuspecting public with a tepid continuation, just four weeks after the original concludes. That film was a rehash of Bridget’s insecurities and self-inspection of her “traumatic life.” Sequel number two, “Bridget Jones’s Baby,” leaps ahead 13 years to the aforementioned birthday. What proceeds is a film full of clichés, manufactured problems (which are frequently telegraphed well in advance) and fantasy elements of finding true love. One example of manufactured plot is, after Bridget learns she is pregnant, she goes through frenzied hoops to find out who the father is. Look, there are only two possibilities and this is 2016, and Mark and Jack are two intelligent, mature and sophisticated men. Why couldn’t Bridget just ask to check their DNA? Manufactured. Poorly. At over two hour runtime, “Bridget Jones’s Baby” wasted that time for me with a story of a character whose sympathy from me ran thin soon after the original. While watching “BJ’sB” I asked the question, “Why am I here?” The answer is:” I am damned if I know.”