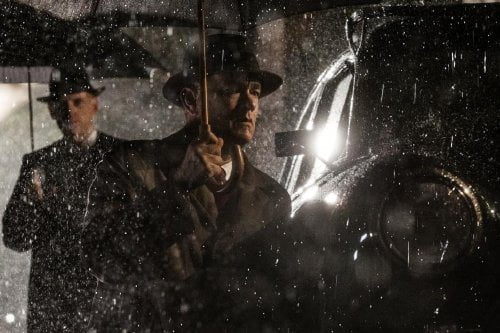 1957. James Donovan (Tom Hanks) is a prominent insurance attorney and partner in the law firm of Watters and Donovan. He is called upon, by the US government, to defend captured Soviet spy, Rudolf Abel (Mark Rylance). It is a thankless job that many others refused but Donovan works hard for his new client, gaining the man’s trust. This mutual respect bonds lawyer and spy and it brings them, following the notorious 1960 U-2 Incident, to one frigid night to make a prisoner exchange – Abel for Francis Gary Powers – at the place known as the “Bridge of Spies.”

At the height of the Cold War, Americans want justice when the F.B.I. arrests Soviet spy Rudolf Abel (Mark Rylance, "Intimacy," PBS's 'Wolf Hall') in New York City. Insurance lawyer James Donovan (Tom Hanks) was perplexed when the Government approached him to defend the man, his only near equivalent experience as a Nuremberg Trial prosecutor, but once he agreed to take the case, he fought pressure to open and close it, believing Abel deserved the same treatment the U.S. would want for one of its own in the same position. The wily negotiator kept Abel from receiving a death sentence by suggesting to the judge he might become useful as a future trade and when American pilot Francis Gary Powers (Austin Stowell, "Dolphin Tale," "Whiplash") is shot down over Soviet airspace shortly thereafter, it is Donovan who is recruited by CIA operative Hoffman (Scott Shepherd, "Side Effects") to head to Berlin's "Bridge of Spies." Spielberg's back in even stronger form than he exhibited in "Lincoln," his Cold War thriller with its National Security versus justice and American ideals theme startlingly relevant in a post 9/11 world with the Patriot and Freedom Acts. This complex story has been beautifully structured by screenwriter Matt Charman with Joel & Ethan Coen adding character and humor. Everything about the production is first rate. This may be Spielberg's best film since "Schindler's List." We get into the story following Abel, an ordinary looking man as he dodges agents in the NYC subway en route to a park bench where he will set up his easel to paint, but also take a hollow coin left for him beneath the bench. When the F.B.I. show up at his apartment, the unassuming man goes quietly. Spielberg shifts to Donovan, a successful Brooklyn family man. His wife, Mary (Amy Ryan, "Gone Baby Gone," "Birdman") doesn't like the idea of him taking Abel's case and her fears pan out. But it's not only neighbors and commuting New Yorkers whose eyes now follow Donovan, the government who recruited him also applying pressure for a quick guilty verdict. Jumping from New York to Peshawar AFB, Powers is introduced being trained for his mission. The pilots are told that once in Russian air space, where they'll be flying above enemy radar, they have no recourse should they be captured except for a poison pin. After Donovan's denied a preparation extension and his motion regarding the illegal search of Abel's apartment, his client is found guilty (commenting on what is, in essence, a kangaroo court, Spielberg cuts to a classroom finishing the Pledge of Allegiance, 'with liberty and justice for all'). But Donovan's gambit with the judge works to save the man's life. The second half of the film finds Donovan in much the same position as Powers, asked to negotiate with the Russians with no official support of the U.S. government. In Berlin, Donovan learns of the plight of American student Frederic Pryor (Will Rogers, "The Bay"), taken by the east when attempting to return to the west after visiting a professor, and he becomes determined to save this young man as well, despite the C.I.A.'s insistence that he only work to get Powers back, their concern not so much for the downed military pilot but for the information he may disclose. Donovan finds his Soviet contact Ivan Schischkin (Mikhail Gorevoy, "Die Another Day") has the same concerns about Abel, whom Donovan knows his steadfast in his honor. He also finds himself caught between the Russians and the East Germans, lawyer Wolfgang Vogel (Sebastian Koch, "The Lives of Others") offering a pseudo Abel 'family' while attempting to get recognition of the German Democratic Republic from the U.S. But of course it's not just the story but in its telling and Spielberg does it every kind of justice. Hanks may be an obvious choice for the upstanding lawyer, but the actor digs in, never coming across as self righteous but an average guy in an extraordinary, dangerous situation unwilling to cave on his convictions. There's inherent humor too, Hanks's Donovan frequently amazed by Abel's inability to be ruffled. Rylance proves canny casting, the English thesp so likable we're can't but champion Donovan's belief that he's an honorable man. The two actors are remarkable together, their characters bonded through a bit of music, a shared story and their unlikely association. There are big moments, Powers' doomed flight rattlingly realistic, but the director uses smaller ones like when we realize Donovan's daughter (Eve Hewson, "Enough Said") was stood up by his law assistant or all the discarded flash bulbs littering the floor of a court house to insinuate deeper meaning. When we last see Donovan traveling on a commuter train, the filmmaker uses the pedestrian journey to recall a horrific one while also establishing a shift in public perception. Oscar winning production designer Adam Stockhausen ("The Grand Budapest Hotel") has done outstanding work here, transporting us back in time on both sides of the Atlantic (the film's climax was shot on location on Glienicke Bridge). Janusz Kaminski's ("Schindler's List") cinematography accentuates both warmth and cold, filtered light enriching the darker hues of the period. With John Williams unavailable, Thomas Newman ("Skyfall") steps up with an effective score that complements the material without distracting. Editor Michael Kahn's ("Schindler's List") work is also notable. "Bridge of Spies" is a triumph of classical filmmaking. Grade: