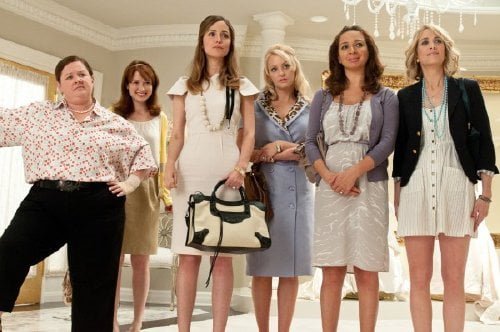 Annie (Kristen Wiig, TV's SNL, "MacGruber") has been best friends with Lillian (Maya Rudolph, TV's SNL, "Away We Go") since the two were little kids but she is stopped short when Lillian announces she is marrying Dougie (Tim Heidecker, TV's 'Funny or Die Presents...'). Faced not only with the upcoming change to their relationship once Lillian has a husband but with economic hardship, Annie's still upbeat about trying to be the best Maid of Honor she can be. Until, that is, she meets the other 'Bridesmaids.'

Producer Judd Apatow suggested Wiig pitch him a movie back when she cameoed in 2006's "Knocked Up," but "Bridesmaids," which Wiig cowrote with long time Groundlings pal Annie Mumolo, feels an awful lot like an attempt to add femme coattails to the R-rated phenomenon of "The Hangover." "Bridesmaids" starts off really well, laying the basis of Wiig's friendship with costar and former SNL colleague Rudolph with fresh humor and heart as well as her disastrous love life with Jon Hamm's (AMC's 'Mad Men') hilariously reprehensible booty calls. But once its best elements are established, things go quickly off the rails when its real theme - that of jealous rivalry - kicks in. If only Wiig had stuck to real friendship and that old romcom saw of inner beauty besting outer. Annie gets a taste of what she's in for at the luxurious engagement party hosted by Lillian's fiance Doug's boss's wife Helen (Rose Byrne, TV's 'Damages'). Helen is everything Annie is not - rich, elegant, socially connected and experienced at coordinating events. Helen, now one of Lillian's bridesmaids, is also determined to take over as much of Lillian's wedding, and Lillian's friendship, as she can. But if the congratulatory toasts which begin the oneupmanship start off amusingly, the comedy is quickly ground down but taking the joke too far. Fifteen minutes in and the film's already flagging. Annie tries the anti-Helen approach by gathering the girls at a cheap ethnic restaurant, hoping cool will play over cachet. Hours later at their bridal store, it's apparent the food, which everyone but Helen ate, is having an ill effect. Cue a prolonged scene where we are treated to women vying for one toilet vomiting on each other while another evacuates from the other end in a sink. Laughing yet? Only Rudolph, forced to defecate on the street in a wedding gown, manages to somehow pull the joke off with her adept physical comedy, bringing a sort of strange grace to her humiliation. Wiig and Mumolo also overdo the economic trials of being a bridesmaid, turning the solid friendship they'd initially presented us with into one of incomprehensible inconsideration on Lillian's part. And since when does a hen party precede the bridal shower, as it does here? To suit the rhythm of Annie's downfall. And fall she does, until, faced with a missing bride on the wedding day, Helen has no one else to turn to. The way Annie's life outside her bridal travails is fleshed out also never works except for her romantic entanglements. She meets a nice cop, Rhodes (Chris O'Dowd, "Dinner for Schmucks"), who's obviously exactly right for her while she's still dallying with the rich and handsome Ted, who couldn't be more obviously using her. A late sequence in which Annie appeals to Rhodes for his help finding Lillian is a charmer that almost lifts the film out of its tailspin. But then there's her roommate situation with Gil (Matt Lucas, 'Little Britain') and his visiting cousin Brynn (Rebel Wilson) that's just impossibly weird, Annie's unfunny tendency to project her personal problems onto customers at her job and occasional visits to a flaky mom (the late Jill Clayburgh, "An Unmarried Woman") which add little character development. Byrne, who has displayed surprising comedic talent in films like "Get Him to the Greek," is OK at the hostile Helen, and Wendi McLendon-Covey (TV's 'Reno 911!') has her moments as the cousin who sees her wedding role as an escape from overworked motherhood, but Ellie Kemper's (TV's 'The Office') Becca is underwritten. As the fifth bridesmaid, however, Melissa McCarthy, so enjoyable on TV's 'Mike and Molly,' is saddled with the character equivalent of the vomitorium scene. She's Doug's sister Megan, butch in appearance presumably because the writers think that means she can therefore act like a guy to pick up guys. Except that her behavior is simply disgusting. Her 'seduction' of a Federal Air Marshall is off putting in the extreme, and the filmmakers won't leave well enough alone, revisiting them in the bedroom combining sex with an oversized sandwich during the end credits. There's always a balancing act with lewd and grossout humor, which can easily cross over into the realm of obnoxiously loathsome, which happens far too often in "Bridesmaids." It's unfortunate, because Wiig has proven herself funny on the big screen time and time again and Rudolph combined warmth and humor as a mom to be in "Away We Go." Instead, using life experience to come up with a first script, Wiig and Mumolo squander their lovely little details and genuinely funny moments and director Paul Feig (TV's 'The Office,' 'Parks and Recreation') stages the physical schtick with all the panache of the dreadful "You Again."

Anne’s (Kristen Wiig) life is a mess. She does not have a boyfriend and is, in a word, broke. But, when her best friend Lillian (Maya Rudolph) announces her engagement, Anne is compelled to be the best maid of honor, ever. The emotional and economic needs of fulfilling this honor will have both devastating and enlightening results when she has to organize the “Bridesmaids.” What could I expect from producer Judd Apertow than a femme comedy that duplicates his “guy” laughers and borrows, liberally, from the outrageous humor of “The Hangover.” “Bridesmaids” should have been named “Bride of the Hangover” as director Paul Feig and writers Kristen Wiig and Annie Mumolo do everything they can to attract the tweenies, both gals and guys. There is some very funny aimed-at-femmes comedy sprinkled through the film and the young ladies will love it. But, producer Judd Apatow lets no audience go unturned and the toilet and gross out gags (and a coupled did make me gag) are directly aimed at the guys out there that loved “Anchorman,” “Knocked Up,” “Pineapple Express,” “The 40 Year Old Virgin” and, of course, “The Hangover.” You cannot be all things to all people and, for me, Bridesmaids” misses more than it hits. The principally female cast is made up with typical guy buddies that have gone through a sex change operation. Kristen Wiig gives Annie a harried air with her money problems, is carrying on an affair with a married cad (an uncredited and despicably funny Jon Hamm) and she agrees to be the maid of honor for her newly engaged best friend, Lillian (Maya Rudolph). What she does not known, and will be stunned to learn, is that the “duties” of the maid of honor are expensive and extensive. The rest of the gang of bridesmaids includes Becca (Ellie Kemper), sister-in-law to be Megan (Melissa McCarthy doing the wisecracking role that would have gone to Rosie O’Donnell 20 years ago) and Helen (Rose Byrne), Annie’s wealthy adversary who is vying for the maid of honor honor and no expense is too great. Annie is overwhelmed and struggles to keep up with the extravagances like the whole bridal party going to Las Vegas for the bachelorette party. Why would Lillian, supposedly Annie’s BFF, not notice that she could not possibly afford all the costs in being a maid of honor? “Bridesmaids” has its roots in television, particularly Saturday Night Live, with writer-star Kristen Wiig and Maya Rudolph harking from the decades running SNL. This shows in the series of comedy skits and situations that are placed there for the laughs, making the movie a series of sight gags and a routine guy/buddy story made for women. The bridal season is looming and this and two other bride flicks are coming out soon to capitalize on the upcoming wedding frenzy. This is not a good enough reason to give us yet another comedy that relies on rude and crude, instead of intelligent and smart.