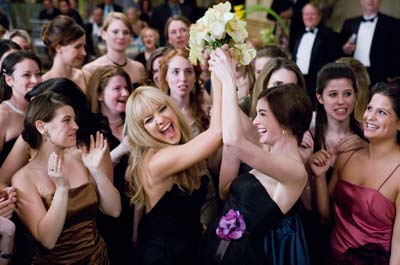 Since they were little girls, Liv (kiss-of-death Kate Hudson, "You, Me and Dupree," "My Best Friend's Girl") and Emma (Anne Hathaway, "The Devil Wears Prada," "Rachel Getting Married") have fantasized about their weddings together. Now each twenty-six and engaged, they discover that their best laid plans have been jeopardized by an administrative goof that results in colliding wedding dates and the two best friends become pitted against each other as mortal combatants in "Bride Wars."

OK, so one the one hand, we have director Gary Winick who has given us such charmers as "Tadpole" and "Charlotte's Web" and even lent sweetness to chick flick "13 Going on 30." On the other hand we have screenwriter Greg DePaul, who gave us the execrable "Saving Silverman" and two television episode writers of the failed American version of "Creature Comforts." Then we have Golden Globe and potential Oscar nominee Anne Hathaway, who helped make such girlie movies as "The Devil Wears Prada" and "The Princess Diaries" click. But we also have Kate 'every other movie I make is awful and the one's in between are nothing special either' Hudson. Which, after "My Best Friend's Girl," would seem to make "Bride Wars" one of the not-so-awful ones, except for a very big tip off - only Hudson has been stumping the talk shows on this one. Hathaway appears to be hiding in her closet until it blows over and everyone gets back to remembering her previous film. What can one say about a chick flick where the guys in the background (Bryan Greenberg, "Nobel Son," as Liv's brother Nate; Steve Howey of TV's "Reba" as Liv's fiance Daniel and "Wanted's" Chris Pratt as Emma's husband-to-be Fletcher) are more likable than the leads? Where two best friends spend ninety minutes switching each other's hair and tanning dyes with noxious colors? Where two brides-to-be entertain a club by acting like strippers? Where Kate Hudson, with blond bangs hanging into her overly made up eyes is supposed to be regarded as a top tier lawyer until she has a blubbering meltdown in front of clients hung over from her bachelorette party the night before (because, as we know, everyone attends these events at night planning on a work day in the morning)? Speaking of illogic, how is it that wedding planner Marion St. Claire (Candice Bergen, becoming a boring paste-in) can find three Saturdays open at the Park Plaza within three and a half months, but then not another for three years? And why, in a movie taking place in New York City, is Boston's Les Zygomates restaurant featured so prominently? (Red Sox pitcher Curt Schilling's wife also makes a cameo at a Boston-shot bridal shower.) There is exactly one laugh in "Bride Wars." Knowing that her friend Liv has a problem maintaining her weight, Emma begins to send cookie baskets and chocolates to her office so that she will no longer fit into her Vera Wang wedding gown. When Liv realizes that Daniel wasn't behind all these gifts, he asks regarding her mention of the International Butter club 'You mean you really eat sticks of butter from different countries?' Which, of course, begs the question - what woman in her right mind would believe her fiance would send her such a gift? "Bride Wars" is tone deaf and deadening. It sets up the friends' competitive nature at the bouquet toss of another friend, drunk at her own wedding, which appears to only be attended by women and the leads' fiances. That friend pops up throughout to comment upon her joyless union. Engaged women are presented as cartoonish gargoyles who will compile a bridal registry with a barcoding machine (OK, vaguely amusing) and wrestle on the floor in Bloomingdale's. In an effort to give their gals a character arc, the screenwriters have Liv realize she doesn't have to be perfect all of the time, even when that realization comes from the aforementioned unprofessional behavior, and thoughtful Emma can stand up for herself by behaving like an outright 'rhymes with witch.' Give me "Bride Wars" and I want a divorce.