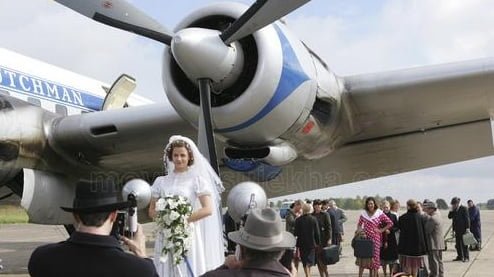 In 1953, a KLM (Dutch Airways) flight participated in an air race from London to Christchurch, New Zealand. KLM wins the race. On board the plane are three women passengers on their way to arranged marriages to husbands-to-be that they hardly know. The three become fast friends during the long journey halfway around the world in what the international press named the “Bride Flight.”

In 1953 post-war Holland people were facing tough housing and job markets when they were also hit by devastating floods. Many decided to emigrate and when KLM announced it was taking part in the 'Last Great Air Race' from London to Christchurch New Zealand, so many women who took part were following husbands and fiancees to New Zealand, the winning plane became known as the "Bride Flight." Just because a film is partially subtitled, playing at the independent art house and written (Marieke van der Pol) and directed (Ben Sombogaart) by the team behind the Foreign Language Film nominee "Twin Sisters" doesn't mean it's an artsy film. "Bride Flight" is like a sprawling summer beach read, a cliche-ridden soap opera that nonetheless works due to great location photography, good acting and solid direction. Van der Pol's script could have been ripped from a 40's 'women's picture,' with its three dramatically different female protagonists tied forever together by one man, but the fact that it is a tale of immigration sprinkled through with elements from real stories of the people who pioneered a new life freshens it up. I was expecting "Bride Flight" to be about the actual race, but that only takes up about the first fifteen minutes of the 130 minute run time. We don't even learn who else was in the race, nor that KLM's 'Flying Dutchman' was an English Electric Canberra bomber outfitted for passengers or that it took them 37 hours and 30 minutes. Instead the titular journey is used to establish the film's four main characters, one of whom, Frank (Waldemar Torenstra), we've seen die in his vineyards in present day played by Rutger Hauer in a prologue. Frank is the son of a doctor who lost his family in Japanese camps in Indonesia. He's gotten an agricultural degree and is heading to a new life where he plans to start a farm. Esther (Anna Drijver, later Willeke van Ammelrooy, "Antonia's Line") is a fashion designer whom we gradually learn lost her entire family in Auschwitz. She has a fiance waiting, but she dumps him quickly when he attempts to make her entire life about her faith. Marjorie (Elise Schaap, in her debut, Petra Laseur as the elder) posed for a magazine cover in her wedding dress before takeoff and is looking forward to raising a large family. They all turn to Frank's deadly shy but beautiful seatmate and learn that Ada (Karina Smulders/Pleuni Touw) is from farming stock. The central romance blooms at 30,000 feet. But Frank is devastated to learn that Ada has already been married by proxy - and she's even more forlorn when, after Frank's wooing, her Calvinist husband Derk (Micha Hulshof) expects her to ride for six hours in a truck flatbed so that there minister (Hans Man in 't Veld, resembling Laurence Olivier in "Marathon Man") can ride shotgun. Home turns out to be a WWII bunker fixer upper and Ada is shamed on her wedding night for her sensuality. Meanwhile, back in Christchurch, Esther makes a play for Frank that turns out to be a one night stand while Marjorie's initial dislike of her new home is overcome. When her initial pregnancy goes tragically wrong, rendering her barren, guess who turns up single and pregnant? The movie shuttles back and forth from the present, where the three woman receive the news of Frank's death and all make their way towards his funeral. The 1953 events fade and are picked up again ten years later, when Majorie and her husband Hans (Mattijn Hartemink) comes across Esther opening a stylish shop - with their son Bobby (Mykola Allen) - and Ada runs away from home into Frank's arms. And so we have the unhappy wife with three children, the happily married woman who wants kids but cannot have them and the single career woman, the three woman plot convention used from "Three Coins in the Fountain" through "Valley of the Dolls" and "Sex and the City." But these actresses, from newcomer Schaap to model Drijver to the more experienced Smulders make their differences and shared 'stranger in a strange land' experience real and casting has done an amazing job matching the younger to the elder. Sombogaart keeps a check on the overt melodrama and also does a fine job contrasting the time periods, the 1950's given a more old-fashioned look than the crisper, brighter present. The flying models used for the race sequence are particularly smart looking in the not quite realistic way of films of the time. We also see an entire country grow up along with the characters. True, van der Pol's screenplay plots it course too obviously (Ada views Bobby in pain in a hospital - cue guilt over her children back home, etc.), but Sombogaart's production feels grounded in reality nonetheless. "Bride Flight" is an epic, modern historical romance that works.

The title is a bit of a misnomer as the record breaking 20000km KLM flight is only lightly touched upon early in the film. That event, though, is the catalyst that brings together Ada (Karina Smulders), Esther (Anna Drijver) and Marjorie (Elise Schaap). Each has a reason for immigrating to New Zealand: For Ada, it is to become a country farm wife to her betrothed, Derk (Micha Hulshof); Marjorie wants to have children and raise a large family; and, Esther wants to be an upscale fashion designer. However, all will be affected when they meet handsome Frank (Waldemar Torenstra) on their epic flight across the globe. This is a grand, sweeping yarn that wears its pro-femme heart on its sleeve. The women, beautiful all, are strong but each has her own flaws, and each involves Frank. The complicated dynamics of these four people as their paths cross and cross again is too tightly woven to give more than a cursory synopsis. The story, by sophomore feature scribe Marieke van der Pol, deftly defines each of the characters to be flesh and blood people. Veteran Dutch director Ben Sombogaart takes the fine screenplay, that spans decades, and, with his terrific cast, creates an epic that draws in the viewer. The production, said to be the most expensive Dutch film made to date, is opulent in costume, location and period detail as the story moves from the 1950s to the 60s and beyond. “Bride Flight” is bookended by the present day where Frank (Rutger Hauer) is a successful vintner in the New Zealand wine country. Over half a century before, when he arrived in his new land, he set forth to fulfill his dream. Frank worked tirelessly to build his vineyard and wine business but, while driving through his land for home, he has a spell, drives off the road and dies. The three women, now scattered across the country, are invited to Frank’s funeral. Their reunion triggers memories for all three and the story dissolves back to the very beginning as the three women board the airplane of their destiny. The remarkable casting of the young and old Ada, Marjorie and Esther - the elder women are played by Pleuni Touw, Petra Laseur and Willeke van Ammelrooy, respectively – makes the transition from the 50s to the present seamless. Again, quality writing, directing and acting shows. “Bride Flight” is really a personal story but told in epic proportions and one that needs be seen.