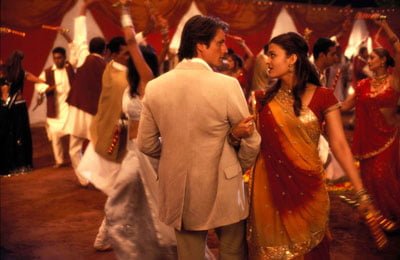 Multi-hyphenate director-cowriter- producer Gurinder Chadha made an international splash with her very successful and popular "Bend It Like Beckam." Now, the helmer joins Bollywood with Jane Austen and adapts the author's similarly named story, but with a Bollywood twist, in "Bride and Prejudice."

To me, India's Bollywood films are an acquired taste. If you are a fan of lavish, colorful musical numbers that include a cast of hundred dancing and singing their hearts out, then "Bride and Prejudice" may well be the movie for you. I, unfortunately, have not acquired this taste for Bollywood extravaganza and was left cold and bored for most of this interminably long film (for its runtime of about 111 minutes). The cast, led by Indian superstar Aishwayra Rai (as Lalita), is attractive (with the younger actors) or amusing (with the older thesps) but the dialog they are hampered with is wooden at best. The saving grace of the film is the broadly comic performance by Nitin Chandra Ganatra as Mr. Kholi, an Indian expatriate to America where he embraced everything crass and exhibits such with an outstanding comic performance. Rai, with her beautiful eyes, is a very pretty actress but I was struck, more than once, by how much she resembles Kirstie Alley (the "Look Who's Talking" franchise and TV's "Cheers"). This was an amusing, to me, distraction that I sorely needed as I sat through this mostly tedious film. Martin Henderson, as handsome William Darcy, is so bland that he almost fades into the background. The young actresses playing Lalita's sisters, Jaya, Maya and Lucky (Namrata Shirodkar, Meghna Kothari and Peeya Rai Chowdhary, respectively) are all very pretty to watch and give an OK ensemble perf. Nadira Babbar, as the girls' mother, Mrs. Bakshi, is decent as the overly ambitious mom who wants her four daughters to marry well (to her own benefit, of course). Anupam Kher, as Mr. Bakshi, is the family's anchor and, often times, is the only sensible one in the house. Naveen Andrews, as hunky objet d'amour for Jaya, is given little to do except kick up his heels in the some of the numerous Bollywood song and dance numbers. Techs suit the breezy style of "Bride and Prejudice," especially when everyone (and I mean everyone) breaks into the song and dance numbers. Art direction is garishly colorful, as are the many costumes, and it all fits within the context of what helmer Chahda is trying to accomplish. As I said, Bollywood films, even in the guise of a classic story, are not my cup of tea. That's not to say that there is not a fair sized demographic that will embrace "B&P." I just happen to not be one of its members. If you're a fan, by all means, go and see it. If you are not, then be aware. I found it to be far too much Bollywood and far too little - except conceptually - of Jane Austen's "Pride and Prejudice." Less of the former and more of the later would appeal more to me.