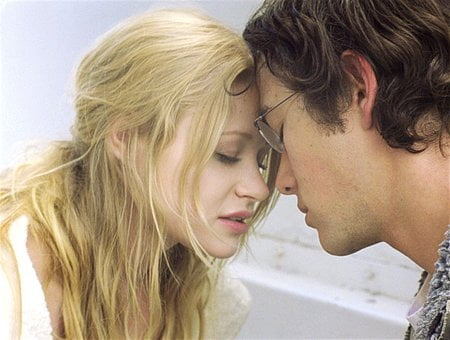 Brendan Frye (Joseph Gordon-Levitt, "Mysterious Skin") is a teenager who runs apart from the pack, but when his still beloved ex-girlfriend Emily (Emilie de Ravin, TV's "Lost," "The Hills Have Eyes") is murdered Brendan follows leads that take him through various cliques, his only clues Emily's last mysterious words about Frisco, tug and a bad "Brick."

Writer/director/editor Rian Johnson won this year's Sundance Film Festival's Special Jury Prize for Originality of Vision and boy did they get it right. Johnson takes the regular travails of high school life - romances, cliques and clashes, teenage pregnancy and drugs - and applies the stylings of Dashiell Hammett for a schoolyard film noir that never plays as gimmicky as it might sound. While references to "The Maltese Falcon" abound, Johnson doesn't simply have his characters running around spouting forties dialogue, "Bugsy Malone" style. Instead he takes the beats and the exaggerated patter and makes them his own. "Brick" is an ingenious piece of work. Johnson lets us know right off that Emily will end up dead, taking his opening moments from the center of his story before flashing back to the event that sets Brendan sleuthing, a note found in a locker indicating a time and street corner. There, a public phone rings and Brendan hears a distraught and panicked Emily. Determined to find her, Brendan consults his friend, The Brain (Matt O'Leary, "Frailty," "Spy Kids 3-D: Game Over"), and the two form a plan that will find Brendan working under a tentative truce with the 'law,' Assistant Vice Principal Gary Trueman (Richard "Shaft" Roundtree). Brad's path to the truth will lead him into an exclusive drama club party, where he's threatened by football jock Brad (Brian White, "The Family Stone") but welcomed by Brad's girlfriend, red hot hostess Laura Dannon (Nora Zehetner, "May"). Looking for Emily's current partner Dode (Noah Segan, "Adam & Steve") introduces him to the hash heads at 'Coffee and Pie, Oh My!,' but it is not until Brendan's jousts with Tugger (Noah Fleiss, "Storytelling") that he finds The Pin (Lukas Haas, "Witness," "Mars Attacks!"), a high school outsider stewing over who cut his last brick. Believing that The Pin's conundrum is tied into Emily's murder, Brendan forms an uneasy alliance with the drug dealer. Johnson covers his noir bases readily. Brendan is obviously the reluctant good guy, the Bogart of the piece, who will be beaten, seduced and betrayed but ultimately redeemed with the truth. The Brain is the trusty informer, a dealer in locker numbers. There's another ex-girlfriend, Kara (Meagan Good, "Biker Boyz," "Roll Bounce"), who fills in for the shady nightclub chanteuse (she's a drama club member, usually seen in elaborate costume). Dode is the Peter Lorre of the piece, his exoticness provided by his druggie look and lifestyle where Tugger is The Pin's enforcer, Elisha Cook Jr. made beefy. From the moment we meet The Pin, bird motifs come into play, from the bird of prey attached to his family mailbox (The Pin lives at home, where his mom, Mrs. M., offers cookies and juice poured from a ceramic rooster) to his duck-headed cane. The femme fatale of the piece, Laura, wears feathers in her hair for Brendan's recap of the story and her part in it. It is the femme fatale, however, that is one of "Brick's" two drawbacks. Zehetner is neither seductive nor sinuous enough to play Mary Astor's conflicted stand-in and only once do we ever feel Brandon waver in her presence. That scene works because of Gordon-Levitt's ability to be hardboiled and sensitive, tossing off this tricky dialogue effortlessly. He's just terrific and is ably supported by three other central figures. de Ravin has only one scene to flesh out Emily and she gets at all the tenderness and bad choices that make her both sympathetic and memorable. Haas is hilarious as the Sherlock caped oddball, his deadpan seriousness tweaked by the childish disarray of his hair. O'Leary is the best at the verbal sparring, his brainstorming sessions with Gordon-Levitt masterfully timed duets. And Johnson's dialogue is brilliant, from the repeated insider lingo of 'Who's she eating with?' defining the significance of lunchroom seating to the unaccentuated wit of the wordplay in 'The Pin's not letting anything drop.' The director works with more than words, however. A schoolyard fight scene is made comical by his funky editing choices. Johnson works humor throughout this film without ever being overt about it or milking easy laughs at the expense of his story. Typical is the weirdness he achieves with The Pin in the back seat of his van, shot from below with a living room lamp to his right. Sound is another well used tool. Watch a classic foot chase scene made unique by the differentiated footsteps of the two participants, a foley artist making music capped with an aural punchline. Nathan Johnson's score is also noteworthy with its unusual use of instruments recalling "The Third Man's" zither. Yet, for all the great camera angles and sound design, technically the film is murky. Still, Rian Johnson has made an auspicious debut with "Brick," his creativity only somewhat undermined by less than stellar technical execution. It's the type of film that demands repeat viewings to fully appreciate all it has to offer.

Brendan Frye (Joseph Gordon-Levitt) is an incredibly bright high school student in a southern California town. Few others are his intellectual equal and he’s the type of kid who can back up his disdainful attitude toward others with his fists. His ex-girlfriend, Emily (Emilie de Raven), has gone missing and Brendan, still with strong feelings for the girl, enters the local crime underworld to get to the bottom of her disappearance in “Brick.” First time writer/director Rian Johnson makes a striking debut with his modern mystery that pays more than just homage to the works of Dashiell Hammet, hard-boiled characters like Sam Spade, and the best of film noir. Johnson did his homework as his characters mouth the machine gun rapid dialog that is simply a pleasure to listen to. “Keep your specs pealed” and I’m not heeling you to hook you” are just a couple of the many bon mots the script has to offer. The talented cast makes these arcane lines feel like they are perfectly normal teen talk. Brendan still has strong feelings for Emily but his negative demeanor and sullen ways drove the girl away. He receives a plaintive call from her, obviously in great distress, though she refuses to see him. He knows she’s in trouble (she got involved with drugs after dumping Brendan) and he pulls out all the stops to find her. He recruits the only person he considers his mental equal, The Brain (Matt O’Leary), who acts a Brendan’s factotum and advisor. Together, they unravel the info that they have and seek the help of the local drug lord, Pin (Lukas Haas). This deal with the devil allows Brendan to solve the mystery but not without a painful cost. Joseph Gordon-Levitt hits his second one out of the park – the first being his risky performance as a teen street hustler in last year’s “Mysterious Skin” – as the very smart, very tough Brendan. He can give as good as he gets and is willing to take chances, even with his life, to get to the bottom of Emily’s disappearance. It’s also fortuitous to “Brick” that the mostly young actors supporting the central figure are all up to the task. Lucas Haas is first among equals of the supporting characters. His Pin (as in Kingpin) is a ruthless drug lord who has a separate agenda from Brendan’s. He wants the brick (a block of illegal drugs) that was stolen from him and will stop at nothing to get it back. His right hand man, Tug (Noah Fleiss) is all brawn and little brain but he is loyal to his boss. Laura (Nora Zehetner) is the smart one of Pin’s minions and can be directly compared with Mary Astor as the femme fatale in “The Maltese Falcon” – I challenge you to see “Brick,” then “Falcon,” and have you disagree. Other perfs, like the drugged out Dode (Noah Segan) and the original John Shaft, Richard Roundtree, as the school’s vice principal are memorable as they represent the drug underworld and the man” respectively. Director Johnson, whose only other work was the 1996 short, “Evil Demon Golf ball from Hell,” belies his inexperience at the helm. He knows what he wants and he marshals his actors with style as he creates a modern film noir that begs the viewer to listen to every word, the dialog is that interesting and, especially, entertaining. He elicits solid performances from all and crafts a murder mystery that also has a dark edge of humor. The younger audience (tweenies) would probably have appreciated subtitles to translate the archaic jargon rampant in the film. But, anyone at all familiar with Hammet’s work, “The Maltese Falcon” and “The Big Sleep” will revel in sheer enjoyment at the intelligence and audacious manner of “Brick.” This no budget indie film should prove an excellent calling card for its director and principle cast. I’d watch it again just to listen to the nifty noir dialog.