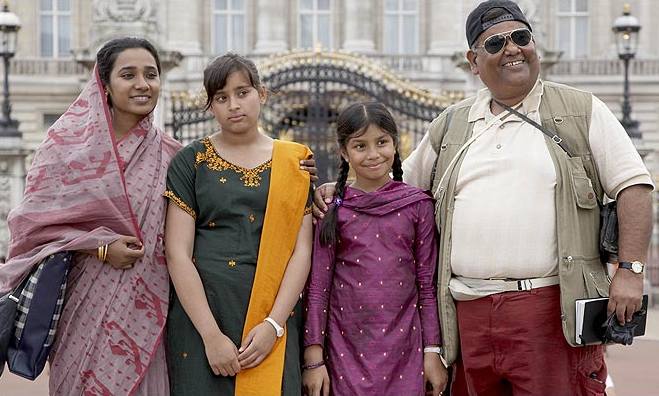 At the age of seventeen, Bangladeshi village girl Nazneen's (Tannishtha Chatterjee) life is dramatically uprooted when her mother's suicide causes her father to arrange for her marriage to an older, educated man in London. Ripped away from her beloved younger sister, Nazneen spends most of her time dreaming about life back home and vicariously glorying in the excitement in Hasina's letters to "Brick Lane."

Young British director Sarah Gavron brings Monica Ali's acclaimed novel (adapted by Laura Jones, "Possession" and Abi Morgan, TV's "Tsunami: The Aftermath") to the big screen employing gorgeous visuals (cinematography by Robbie Ryan, "Red Road") for her Bangladeshi flashbacks while depicting London with oppressive claustrophobia. Gavron succeeds expressing emotion through pictures, but although Chatterjee exudes sad servitude and later the blossom of love, the director does not make her heroine's emotional maturation entirely believable, mainly because of the utter unredemptiveness with which Nazneen's husband, Chanu (Satish Kaushik), is viewed until film's end. A young Nazneen plays with her sister in lush green paddy fields dotted with vibrantly colored insects. Mother always told her 'the test of life is to endure,' but mother does not pass the test, walking into a pond in a brilliant red sari. Later a boat leaves the village dock with Nazneen adorned in bridal garb while Hasina flees in despair (does a Bangladeshi bride wear her wedding wear half way around the world?). Flash forward sixteen years later and we see Nazneen's back as she prepares dinner in the tiny galley kitchen of a dark, cramped, anonymous walkup in Brick Lane. Teenaged daughter Shahana (Naeema Begum) is going through a rebellious phase, especially with her Bapu, frustrated as well by mom's inability to speak up. Chanu is grossly overweight, unattractive and much older than his beautiful wife. He's also the sort of man so puffed up with pride he cannot see how ridiculous and pathetic he is. When Chanu brags about the inevitability of a promotion, we just know bad things lie ahead. We discover bad things in the past from gossiping neighbors who tell newcomer Razia (Harvey Virdi, "Bride & Prejudice," "Venus") that Mrs. Ahmed keeps to herself and that she lost her firstborn, a beautiful baby boy. Nazneen notes that Razia is running a sewing business from her home and shyly expresses interest, hoping to earn enough money for a visit back home. Friendly Razia sets Nazneen up and that is how she meets Karim (Christopher Simpson, "The Keeper: The Legend of Omar Khayyam"), the handsome younger Muslim who brings the ladies their piece work. The sparks of sexual attraction are immediately evident and even though propriety keeps a Muslim wife from spending time alone with another man Nazneen cannot help herself. Chanu makes himself even less attractive in comparison when, having quit his job, he purchases a computer from the local usurer Mrs. Islam (Lalita Ahmed, "Bhaji on the Beach"), expecting Nazneen's new income to cover it. 9/11 changes everything. Now Chanu is the one desperate to return home. Karim begins a Muslim 'protection' group for the community and wants Nazneen to divorce her husband. Shahana is miserable and wants mom to stand up to dad and tell him she wishes to stay. Satish Kaushik, who's given a deeply expressive performance, is now allowed some compassion in three escalating scenes that reveal other sides of his character, yet I never felt Nazneen's change alongside him. This is a man who has been depicted in the worst light - having his toenails clipped, rolling onto his wife for grunting sex, snoring and withholding her sister's letters, yet suddenly Nazneen recognizes his value? A better explanation for Nazneen's self realization is the revelation of what is really being said in those letters - a change from something like a romance novel to very harsh reality. The film is also successful in paralleling Nazneen's youthful relationship with her sister to her daughter Shahana by rendering a chase through paddy fields as an after dark chase through the streets of London - we feel Nazneen grow into more assertive motherhood. Her role as a wage earner also makes her more forceful as she calls out Mrs. Islam. Still, it is the romantic part of the story that has been given prominence. "Brick Lane" is an interesting immigrant tale that doesn't fully pull off its heroine's shifting world view.