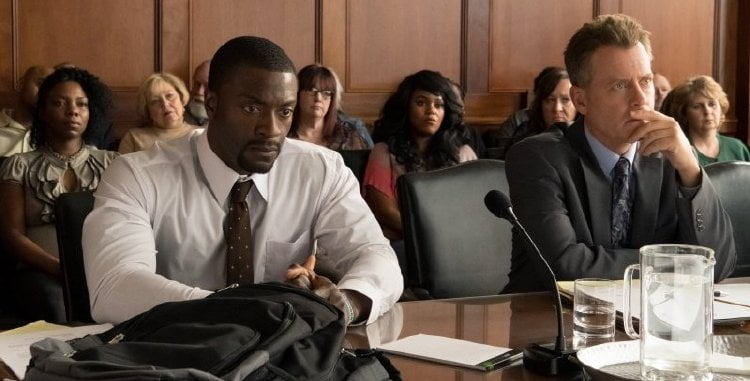 At 16, Brian Banks (Aldis Hodge) was an outstanding high school football player with an assured career through college, with a scholarship to USC, and on to the NFL. Then, in 2002, he was accused of raping a classmate and those hopes turned to ashes. A decade later, the former star was exonerated of the crime and a new hope began for “Brian Banks.”

Brian Banks (Aldis Hodge, Showtime's 'City on a Hill') was a high school football star with a scholarship awaiting at USC when a classmate falsely accused him of rape. Promised no jail time if he accepted a plea deal and given only ten minutes to decide, Banks took it only to find himself sentenced to six years. His five year parole was contingent on wearing an ankle bracelet that would prevent him from playing the game he loved while his record made finding any job at all almost impossible. Then he heard about the California Innocence Project. But even the CIP's Justin Brooks (Greg Kinnear) didn't hold out a lot of hope for Banks, offering writ of habeas corpus as his only option, one requiring completely new and compelling evidence. This true story of yet another case of American injustice and another against a black man deserves to be heard, but director Tom Shadyac ("Patch Adams") does nothing to raise it above movie-of-the-week mediocrity. Aldis Hodge's fine performance has been done a disservice with pedestrian filmmaking, writer Doug Atchison ("Akeelah and the Bee") failing to find a new angle for a story which we have, unfortunately, heard many times before. The film jumps around in time, beginning with Banks' parole frustrations. His impassioned pleas to Brooks, whose initial impulse is to concentrate on cases where the client is still incarcerated, fills in some of history, such as his time with USC coach Pete Carroll (Matt Battaglia) and his 'sure thing' with the NFL. A love interest, gym trainer Karina ('This Is Us's' Zoe, Melanie Liburd), is used to flash back to his jail time where Morgan Freeman pops up to offer inspirational one-liners. Brian's mom Leomia (Sherri Shepherd) urges everyone to imagine her heartbreak. It was Banks himself who helped break his case when his accuser, Kennisha Rice (Xosha Roquemore), brazenly sends him a Facebook friend request (the accuser's name has been changed here). His conviction and sex offender status finally cleared, Banks was given another chance by Carroll, but his late start restricted his career to four preseason games with the Atlanta Falcons, events conveyed during the movie's final credit rollout. Perhaps the film's nonlinear approach was meant to add interest, but it has a deflating effect. Saving the film's most outrageous injustices for its climax doesn't allow our sense of outrage to build over the course of the film. Curiosity is stoked more for the case of Marilyn Mulero, a woman put on death row from a plea deal, mentioned in passing by Brooks. Brian Banks deserved better, not only from the American justice system, but from this paint-by-the-numbers film. Grade:

“Based on a true story” starts off this earnest telling of a false accusation of rape that ended Brian’s football future when he was just getting started. Sentenced as an adult, the young man faces six years in prison followed by five more years of monitored parole – dashing any hope of getting back the NFL career he lost. The story, directed by Tom Shadyac and written by Doug Atchison, is a straightforward, by-the-numbers biopic that wastes little time getting to Brian’s long and arduous road to exoneration. Aldis Hodge, somewhat challenged with a role that spans from Brian’s mid-teens to mid-twenties, envelopes the young man’s character with a veteran’s assurance. Greg Kinnear’s human right advocate Justin Brooks fills the symbolic role of the man who believes in the convict and his innocence. But, the film belongs to Hodge. The telling of Brian’s story is, as I said, an earnest effort. But, there is a lack of spirit that is needed to elevate the miscarriage of justice to a higher level.