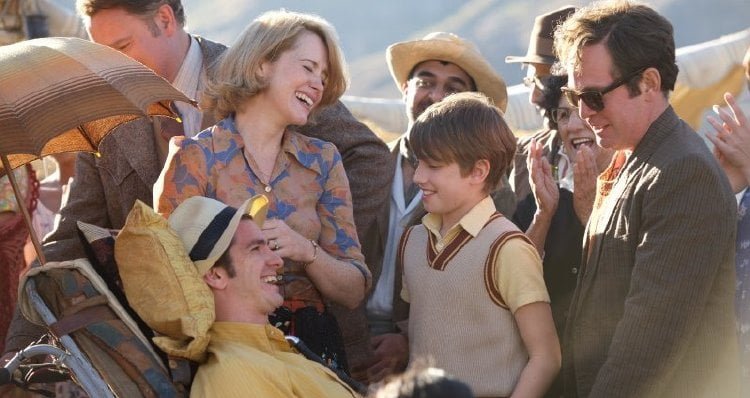 Robin (Andrew Garfield) and Diana (Claire Foy) Cavendish have a wonderful life of love and adventure. Then, at 28, Robin is struck down and paralyzed by polio. Destined to a life bed-ridden and dependent on a mechanical respirator 24 hours a day, he and Diana, with the help of inventor/engineer Teddy Hall (Hugh Bonneville), break those boundaries in “Breathe.”

In 1950's England, former British Army officer Robin Cavendish (Andrew Garfield) was playing cricket when he was struck by the beauty of socialite Diana Blacker (Claire Foy, Netflix's 'The Crown'). 'She's a heartbreaker,' warned one of her twin brothers (Tom Hollander, "Tulip Fever"), but Robin persisted and soon the couple were living an adventurous life in Kenya, where Robin became a tea trader. But just before the arrival of the couple's first child, Robin was struck down by polio, paralyzed from the neck down and given only months to live. He tried to convince Diana to get on with her life, but she took a great risk, moving her husband and his respirator to their home at a time when life outside a hospital for victims of his disease was unthinkable in "Breathe." Motion capture performance artist extraordinaire Andy Serkis makes his directorial debut with a film written by William Nicholson ("Les Misérables," "Unbroken") for producer Jonathan Cavendish, the son of Robin and Diana. Serkis was drawn to the material because of his own experience with disabilities, his sister wheelchair bound as an MS sufferer. But although the idea for this film was hatched ten years ago, it has the misfortune of following 2014's "The Theory of Everything" about Stephen Hawkings and his young wife's similar struggles with neuron motor disease. The more serious problem is that "Breathe" is just not very good. It seems unlikely that anyone other than special interest groups will be eager to line up for this one. After having no idea just why the purportedly unwinnable Diana married Robin, cinematographer Robert Richardson ("The Aviator") gives us an aerial view of their Kenyan paradise (one which will later be used to introduce a Spanish vacation). Diana is now expecting and the couple enjoy a wide social circle. One day, Robin does something unprecedented. He loses a tennis match. We can see something is wrong and eventually Diana does too. By that evening, her husband is paralyzed. He's airlifted back to England and ensconced in Dr. Entwhistle's (Jonathan Hyde, TV's 'The Strain') polio ward. Unable to speak, he mouths 'Let me die.' Instead, Diana begins questioning Dr. Khan (Amit Shah, "The Hundred-Foot Journey") about his respirator. Khan says it's just a machine and will work anywhere, but a mere two minutes without power will result in death. Sensing that Robin would prefer a risky life at home rather than his current, stultifying existence, she removes him to the rundown rural brick home she's bought with the last of their savings. Robin's spirit rebound when he's able to see his wife and child all day. He learns to speak again and is the life of their many parties. One day he spies a horse drawn cart and it gives him an idea. He engages their inventor friend Teddy Hall ('Downton Abbey's' Hugh Bonneville) to build him a wheel chair that also houses his respirator. Teaming up with Dr. Clement Aitken (Stephen Mangan, TV's 'Episodes'), director of the Disability Research Foundation, the Cavendishes' work to free other polio sufferers, starting with Entwhistle's ward. While many individual scenes work (Robin's excruciating first brush with death when their dog Benjy pulls his plug in play, a horrifying look at a sterile, state-of-the-art German polio facility), the film on the whole is hard to swallow. We never see a single moment of strife within the Cavendish home, the family and their circle's upper lips so stiff they could serve tea on them. Everyone's always chipper. Jonathan accepts his father's plight with an unquestioning smile. Diana's reaction to the couple's aborted sex life is to brush it off despite Robin's permission to find one elsewhere. A Spanish holiday quickly goes south when Robin's respirator explodes on the road (it can be manually powered), but by the time Teddy's flown in to assist, a party of natives has sprung up around the car by the side of the road. Another 'huh?' moment in a film with too many of them. The period production work is fine, as are costumes, hair and makeup, but the special effects work to 'twin' Hollander is unconvincing. Song selections can be corny ('True Love'), but at least many are unconventional. Garfield worked hard to time his breathing to appropriate the voice of a man on a respirator and he sketches out his character admirably given his restrictions. The film's finale is anticlimactic, not helped by Mangan's so-cheerful-as-to-seem-unsympathetic Clem. An almost unrecognizable Diana Rigg appears as Lady Neville, a donor to the Cavendish cause. Grade:

I only had the most cursory idea of the Robin and Diana Cavendish story so I went into “Breathe” with a fairly open mind. I found it an interesting story that looks lovely in its soft, warm colors but it lacks depth. There is the theme of “true love” and how the couple faced every obstacle by standing tall (or, in the case of Robin, confined to a wheel chair, sitting tall) and not backing down from adversity. But there is more to the story, as I found out later, I went online and did some reading about the Cavendishes and the film covered the bases but not the depth of the real story. The couple did face and overcome adversity but they also championed giving people, in the same boat as Robin, a life. Their dedication to othears is glossed over as the story concentrates on Diana’s dedication to her man and his to her. Andy Sirkis makes his directing debut with a script by William Nicholson and it has the facts –Robin succumbed to polio but he and Diana, adventurous kindred spirits made for each other, would go on to help others suffering the debilitating disease – but cloaks it all in sepia tones and nostalgia. The story, as told on the screen, moves from idyllic interludes of family and friends to punctuating crises over Robin and his breathing issues. “Breathe” is a pretty, semi-inspirational story about true love and overcoming whatever obstacle put in their path but there is a better movie buried in there.