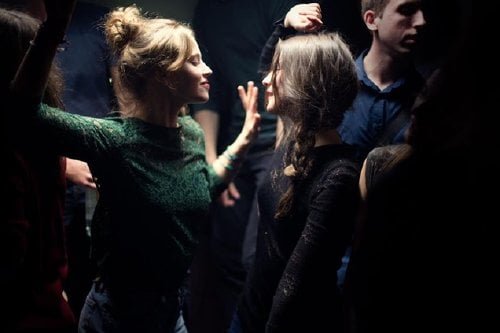 Charlie (Joséphine Japy) is a virginal high school student who quotes Nietzsche in class while discussing whether one gains or loses freedom experiencing passion. She's seen the effects this has had on her mom Vanessa (Isabelle Carré, "Romantics Anonymous"), suffering because of her husband's philandering. But when a new girl, Sarah (Lou de Laâge), is introduced to her class, Charlie almost forgets to "Breathe."

Adapting 18 year-old Anne-Sophie Brasme's novel, cowriter (with Julien Lambroschini)/director Mélanie Laurent ("The Adopted") has made some wise moves, notably abandoning the book's flashback structure in order to deliver a killer of an ending, at least for those not familiar with the source material. This is the actress's second film behind the camera, and while early goings are heavy handed, Laurent has a trick or two up her sleeve, her movie gaining power as it plays out. She's also gotten two dynamic performances from her young costars, each of whom were nominated for a 'Most Promising Newcomer' Cesar. Sarah knows how to manipulate a crowd, making points by slyly mouthing the answer to class clown Gastine (Thomas Solivéres, "The Intouchables") at the board as the teacher is otherwise occupied introducing her. Fatefully, Charlie's deskmate is moved to make way for Sarah and the two are an immediate study in contrasts, the dark haired, innocent and open faced Charlie paired with the blond, knowing seductress Sarah. (Costume designer Maïra Ramedhan Levi accentuates the difference, putting Charlie in striped light boat necks while Sarah wears purple plunging florals). Sarah fascinates with her worldliness, explaining that she's smoking Nigerian cigarettes because she's just moved from there, her mother having stayed behind with her work. In no time, the two are inseparable, much to the confusion of Charlie's former best friend Victoire (Roxane Duran, "The White Ribbon," "17 Girls"), now an observer rather than participant in Charlene's life. Sarah first alerts Vanessa's maternal alarm center when she encourages Charlie to get on the other line when her dad calls, enabling her to tell him to 'get lost' while she herself adds an expletive. With a holiday approaching, she bemoans the fact her mom won't be home, obviously hinting for the invite she receives. It is here, away at a communal lakeside camp, that the girls' relationship begins to change, Sarah peeved when she's introduced as a 'classmate' rather than a 'friend,' critical of Charlie's every move, thrown off course when the handsome Spaniard she's set her eye on, Esteban (Alejandro Albarracin), instead has eyes for Vanessa. Sarah plays hard to get while Charlie goes into a lovelorn funk. Their first kiss is followed by a slap, Sarah's MO in a nutshell. When Charlie's drawn into a lovely, percussive duet with Esteban on his drum, Sarah takes her hand, upsetting her tempo. This back and forth passive aggression continues back at school, Charlie catching Sarah in a lie which is turned around as a betrayal of friendship. When Charlie discovers Sarah's biggest fiction, she reacts with compassion, thinking she's found the source of her obsession's behavior, but again Laurent and her actresses confound expectations. If at first de Laâge seems to be acting too broadly, playing the villainess, it is because Laurent's direction intends to keep us off balance, much like Charlie. But that demonic laugh she initially delivers as a joke really hints at something deeper and darker. The film's early goings seem a bit like a YA version of "Blue Is the Warmest Color" until it becomes clear it's heading more towards a nastier, deadly serious "Mean Girls." Japy gives the quieter of the two performances, but we can read her thoughts on that face which clouds over into a darkly brewing storm. Also very good is Carré, whose loving, supportive mom's arc parallels her daughter's, each warning the other of threats they cannot see when confronted with the same themselves. Laurent breaks from the intensity of her close character shots with cinematographer Arnaud Potier's beautiful widescreen nature shots, many of which isolate Charlie in landscapes of sea and sky. But she closes on Charlie's face, off center in the shot, the psychological and physical ramifications of an abusive relationship off screen in the upper left corner of the frame. The director makes her title quite literal, Charlie suffering panic attacks leading to a full blown asthmatic episode before her shocking climax. Grade:

Melanie Laurent makes a surprising and sure-handed debut behind the camera with “Breathe.” At first, I thought the film was going to follow French youth culture with the relationship between Charlie and Sarah. And, yes, the film starts off with that convention but twists it on its ear at about the halfway mark. Then, “Breathe” becomes a very different film with sinister overtones as it spiral into its unanticipated course. I did not see the climactic ending coming but let us leave it to the viewer to enjoy.