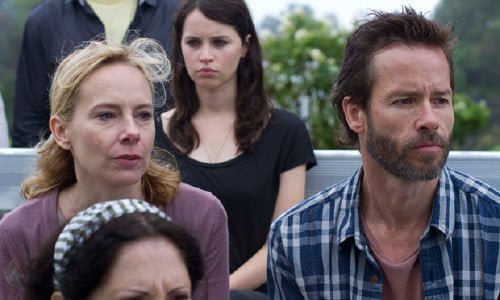 When English exchange student Sophie (Felicity Jones, "The Invisible Woman") arrives at the upstate New York home of high school music teacher Keith Reynolds (Guy Pearce, "The King's Speech," "Lawless"), a simmering tension between him and his wife Megan (Amy Ryan, "Gone Baby Gone") is immediately apparent. Their only daughter, 18 year-old Lauren (Mackenzie Davis, "That Awkward Moment"), is into sports, not an instrument, whereas Sophie is a classical pianist of great talent. Keith and Sophie, both adrift, find a communion in their common passion that leads to the fracturing of a family in "Breathe In."

I wasn't a fan of cowriter (with Ben York Jones)/director Drake Doremus's "Like Crazy," which also starred Jones, and while his sophomore film is better it suffers from similar problems - a selfish lead female character (in this case, Ryan) whose is supposed to be garnering our sympathy and shaky foundations for character motivations in another (Jones). Pearce, however, gives a fine performance and the film is intimately shot with a lovely, often mournful score. Keith's middle-aged crisis is telegraphed when he hides his laptop display of his old rock star days from his wife. When Sophie informs him that she has cancelled her attendance in his class, Keith insists she appear until paperwork has been transferred. He demands a musical introduction and the girl plays so extraordinarily, it is clear he has little to teach her. Keith keeps his hand in the world of professional music by subbing on cello with the New York Philharmonic, an activity his wife refers to as a 'hobby,' and with a seat about to open, he wants to move back to the city while his wife is firmly rooted in their current lifestyle. Sophie is the only one who appreciates Keith's predicament, as she herself has doubts about her ability to make music her career. She also draws the attentions of Aaron (Matthew Daddario, "Delivery Man"), the former boyfriend Lauren hasn't been able to get over. Jones and Doremus have established a pot that's about to boil over, but Sophie's initial act of character definition - that piano piece - could be read two different ways and her having rejected Keith's class makes one lean toward only one of them. Once that mindset is established, none of her decisions seem of her own making (and Keith's appears to negate his original goal). Similarly, the filmmakers have chosen a grand old home for the Reynolds, yet push Sophie and Lauren's conflict by having them share a room, an almost laughable choice necessitated by dramatic developments. As things come to a climatic head intercutting among three locations, Megan sits contemplating the pieces of a broken cookie jar! Pearce gives a quiet, contemplative performance (and plays the cello) which makes his appeal to a beautiful, much younger woman easily acceptable. Also good is Davis, whose understated reactions radiate deep hurt and confusion much better than any histrionics. But Jones, outstanding as the other woman in Fiennes's "The Invisible Woman," seems adrift here and Ryan's Megan projects no desires past maintaining the status quo. "Breathe In" certainly isn't a bad film, but its intimate look at a family upended by an outsider leaves us with nothing but people whose feelings of dissatisfaction are met by cold reality.