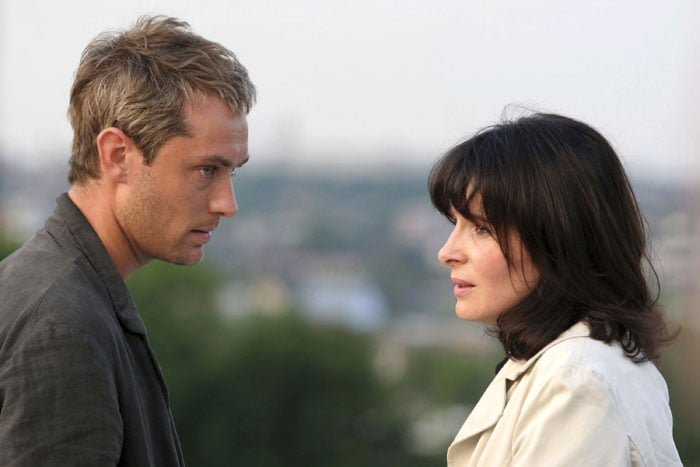 Will Francis (Jude Law, "Cold Mountain") is partnered with his friend Sandy (Martin Freeman, "Shaun of the Dead") in a forward thinking architectural firm planning the urban renewal of London's King's Cross district. His Swedish wife Liv's (Robin Wright Penn, "Nine Lives," "Sorry, Haters") obsessive devotion to her autistic thirteen year-old daughter Bea is driving a wedge into their relationship and he looks for love elsewhere when he meets the beautiful Bosnian mother of the teenage boy who has been plaguing their office by "Breaking and Entering."

After a string of literary adaptations, writer/director Anthony Minghella ("The English Patient," "Cold Mountain") serves up an original sprung from personal experience, but unlike his 1991 debut "Truly, Madly, Deeply," his latest is an awkward amalgam, featuring head-scratching symbolism, characters who trail off into the ether and an unsatisfying wrap up. "Breaking and Entering" is watchable, but disconnected. Initial drama is given a comedic twist by the partners liberal bent. Despite all evidence to the contrary, they refuse to consider their cleaners as potential culprits. Sandy's awkward attraction to Erika (Caroline Chikezie, "Æon Flux"), his black contractor, is representative of the global jumble that defines the neighborhood (and yet it, like other intriguing strands, goes nowhere). Another partially realized relationship is formed when Will keeps watch overnight from his car and bold Russian hooker Oana (Vera Farmiga, "Down to the Bone," "The Departed") decides it's a good place to warm up and perhaps gain another client. Their conversation almost make him miss Miro (Rafi Gavron), the youth whose been robbing them, making his entrance through the roof of their building. Rather than turn the youth in, Will forges a bond with Miro's mother by taking her a suit for alteration. Amira (Juliette Binoche, "The English Patient," "Caché"), a Bosnian refugee, is frustrated by the male relatives who tempt Miro into crime and Will seems like a good influence for the lad. Still, when she realizes Will was her son's victim, her maternal protectiveness takes an ugly turn and she beds Will for insurance via blackmail. One can see the divergent forces from all corners of the globe which Minghella was attempting to draw together, but "Breaking and Entering" is an unsewn patchwork. Will is a man literally torn between two mothers, but the women's actions are equally extreme and unseemly. The character of Oana is entertaining, but where does she go and what was her purpose? She seems to understand the connection between Will and the shrieking fox which inhabits his property, but she makes it no clearer to us. The film's wrap has one mom flip flop between noble intentions and resentment while the other makes a radical choice that does not ring true. "In Breaking and Entering," the actors are fine but they're all left stranded by Minghella's shattered vision. Benoît Delhomme's cool cinematography and a truly lovely score, by Underworld's Karl Hydem, Rick Smith and Gabriel Yared, are the film's biggest assets.