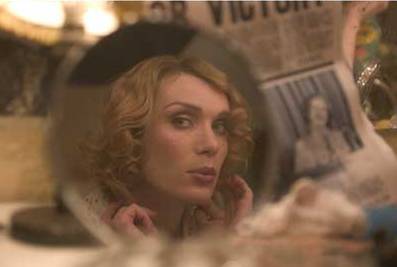 In 1958 on the southern side of Ireland's border, Patrick "Kitten" Braden (Cillian Murphy, "Red Eye") was left on the local church steps and found by a guilty Father Bernard (Liam Neeson, "Kinsey," "Kingdom of Heaven"). The flamboyant youth was treated with little sympathy by his pub-owning foster Ma Braden (Ruth McCabe, "Intermission," "Rory O'Shea Was Here") and was continually in trouble with the Catholic priests at school. But a friend's kindly dad (Paraic Breathnach, "Ella Enchanted") tells Kitten about his real mother, who he says looked like Mitzi Gaynor and was 'swallowed up by London,' and a fanciful biker (Liam Cunningham, "Dog Soldiers") gives him the notion to travel to find her when he describes the Astral Highway and "Breakfast on Pluto."

Director Neil Jordan ("The Crying Game," "The Good Thief") adapted another of Pat McCabe's novels far more successfully with 1997's "The Butcher Boy," another fantastical saga of an unusual Irish childhood set against historical events and featuring visions of cowboys and Indians and an unusual soundtrack. This time, however, in attempting to show the eternal optimism of his protagonist, Jordan instead offers a series of uninvolving vignettes annoyingly broken up by the book's forty chapter headings which only emphasize its episodic nature. Cillian Murphy, with his high cheekbones and beautiful lashes, is one guy who doesn't need any makeup (he was too pretty as the suitor in "Girl with a Pearl Earring") and has no trouble slipping into Kitten's pretty skin, but that's as deep as this performance goes. Some supporting players, such as Jordan veteran Stephen Rea ("The End of the Affair," "featdotcom"), fare better, but on the whole "Breakfast on Pluto" adds up to a whole lot of wasted talent. Kitten first falls in with rocker Billy Hatchet (singer/composer Gavin Friday), whose attempts to incorporate Patrick into his Wild West Indian glam rock group Billy Rock and the Mohawks as his squaw is met with disdain by both the band and the audience. Billy sets up his Kitten in a crumbling caravan that in actuality is a gun cache for the IRA. Kitten's anti-violence just like his good friend Charlie (Ruth Negga). (Their friend Irwin, though, (Laurence Kinlan, "Veronica Guerin") falls in with the IRA and Charlie suspects as much.) On a return trip home, Kitten witnesses the childhood group's good friend Laurence (Seamus Reilly) killed by a bomb on the streets (Laurence, who suffers from Downs Syndrome, is the cliched mentally challenged sacrificial lamb - for another recent example of this odious device, see "Innocent Voices"). Kitten wears a fabulous outfit to his funeral, then returns home to do some spring cleaning. This gets him thrown out of his home by a couple of IRA heavies, so Kitten heads to London where two addresses for his mother turn out to be dead ends. London finds Kitten living on the streets and the kindness of strangers (with little luggage but an extensive wardrobe). First up is John-Joe, (Brendan Gleeson, "Harry Potter and the Goblet of Fire") who suits up as Womble Uncle Bulgaria for the kiddies while wrestling with a severe anger management problem. He could have added some weight to the story as an abusive husband figure, but instead is used for laughs. Hustling on the streets, Kitten is picked up by the smooth Mr. Silky String (Roxy Music's Bryan Ferry sporting a pencil 'stache and 'Feelings' on the radio!) whose murderous impulses she fends off with her perfume spray. The next day, her big eyes and bruised throat attract the attentions of sad sack Bertie (Rea, "The Crying Game," whose eyes are wide open this time) who incorporates her into his magic act, but exploits Kitten's yearning for mammy while hypnotized. The visiting Charlie finds her thus, and drags her away to support abortion plans which she abandons when Kitten reminds her of his own beginnings. Next up, Kitten is the victim of a nightclub bombing (the most effectively done scene in the film), but her Irish heritage and sexual disguise pin her as the Killer Queen. Interrogated by Inspector Routledge (Steven Waddington, "Edward II," "Sleepy Hollow") and beaten by PC Wallis (Ian Hart, "Finding Neverland"), Kitten serves up a fetishized story of a black patent leather suited self who saves the world spritzing cologne (Murphy plays this scene like Tim Curry's Frank'n'furter). One week later, the cops recognize their error and release the reluctant Kitten back to the outside world, but when Wallis finds her on the streets, he takes her to the safe haven of a peep booth club. Here she's found by Father Liam who gives her the address of her real mother, Eily Bergin (Eva Birthistle, "Bloody Sunday," "Ae Fond Kiss"). Hallelujah! Is this the end? Well not quite. Kitten masquerades as a British Telecom survey taker and meets the married mother of two whose eldest son (Sid Young) has also been named Patrick, but never divulges her true identity. Instead she returns to the father she's found who is now harboring the pregnant Charlie, unwanted after Irwin was offed by the IRA. The Christians of Tyreelin are scandalized by the company Father Liam keeps and one night a Molotov cocktail sets the Church and parsonage ablaze, but the priest saves his two charges, Charlie's baby is born and all the good folk of Kitten's life cross paths at the hospital. "Oh, serious, serious, serious!" cries Kitten when anything threatens her rose-colored world view, but Jordan's interminable film never gets us into his heroine's seemingly empty head. Kitten is like the bouncing ball following a singalong (which here features Bobby Goldsboro's "Honey" as Kitten's 'theme' and selections including Sweet's "Wig Wam Bam," "Me & Mrs. Jones," "Children of the Revolution," Fly Robin Fly" and "How Much Is That Doggy") without adding any interpretation of her own. For all his use of political background, Jordan gives us little sense of the times (1960s and 1970s) and his openly out heroine encounters precious few prejudicial travails. As Kitten's film-length friends, the exotic Ruth Negga is unbelievable coupled with the schlubby Kinlan. Neeson and Birthistle are both saddled with roles half realized in fantasy (Kitten's school essay about his conception with Father Liam's 'fairy liquids' is a comic high point) that render them bland in reality and Gleeson's character makes little sense. Rea is able to conjure up some mystery as the tatty magician, Hart's turn as the 'bad' cop with a heart of gold shows some imagination and Ferry's sleazy lounge persona of latter years serves him well here, but they're only brief surges in this flatline of a film.

A pretty young woman pushes a baby pram past a construction site and gives good as she gets as she banters with the workers. They don’t know it but the salty tongued “mother” is anything but in “Breakfast on Pluto.” Patrick “Kitten” Braden has lived, by all accounts, a tough life. Abandoned as an infant on the parish doorstep of the local Catholic church in Tyreelin, Ireland in 1958, the boy was raised by the owner of a nearby public house, Ma Braden (Ruth McCabe). Nine years later, she is shocked to find the boy wearing his stepsister’s dress and lipstick. Patrick, we quickly learn, is different - much to Ma’s chagrin as she curses “the day I ever took you in!” to the boy. The ever-optimistic, cross-dressing Patrick accepts life for what it is, making friends with Charlie (Bianca O’Connor), Irwin (Emmet Lawlor McHugh) and Laurence (Seamus O’Reilly), who has Down’s syndrome. Laurence’s loving dad, Benny (Paraic Breathnach), conveys to Patrick three important pieces of information: his mother is named Eily Bergin (Eva Birthistle); she looked like Mitzi Gaynor; and Benny once saw her on a street in London. Several years later, the flamboyant and confident Patrick, self-dubbed “Kitten,” thwarts all attempts at home and school to reign him in. The now-thoroughly femme Kitten decides to pack it all in. She, Charlie, Irwin and always-faithful Laurence go to a local club and are threatened by some local toughs, but Kitten and company come under the protection of a pacifist bike gang. Its leader (Liam Cunningham) is a philosopher who talks about “the astral highway” and preaches what really matters in life is the journey and having “breakfast on Pluto.” This chance, idyllic encounter changes Kitten’s life and she decides to take Benny’s three truths and try to track down her birth mother in the city that swallowed her up. Along the way, Kitten encounters good people, very bad people (Brian Ferry as a smiling, ruthless serial killer is chilling), IRA terrorist bombers and gunmen, good cop/bad cop and, eventually, her mother. Kitten’s story, by director Neil Jordon amd Patrick McCabe (from McCabe’s novel of the same name), is told in about 38 chapters. This is one of the problems I have with “Breakfast on Pluto.” There is too much going on in Kitten’s life and, because of the episodic nature, much is left unexplored. Another problem is lack of character arc for Kitten. Once you know her views on life and see her unflappable, flamboyant personality that is all you get. Even when facing the most perilous threats, Kitten maintains her sharp wit and is unfazed by danger. At times, this behavior is, at least, foolhardy (or plain stupid). Cillian Murphy gives an unusual performance, to say the least, as Kitten. He has the appropriate androgynous looks, studied his girlie moves and put on the husky voice to give Kitten a particular character, but it all comes across as caricature. I’m not sure if anyone else could have done better, though, because of the lack of character development. Supporting cast is huge with most given only brief screen time. Besides Kitten and her crew (with Ruth Negga coming across well as adult Charlie) there are all manner of folk on display. Liam Neeson appears as the priest with a secret. Gavin Friday gets the most out of his macho bandleader, Billy Hatchet, who brings Kitten into his band, the Mohawks. When things don’t work out with Kitten’s stage career, Billy ensconces her in an old caravan where she happily keeps house until a tragedy involving Laurence, the IRA and a secret weapons cache. Ian Hart makes an appearance as the bad cop but with a heart of gold. There are numerous characters surrounding Kitten, most of them quickly forgettable. Helmer Jordan and his crew do little to evoke the 1970’s aside from a treacle sound track that features that schmarmy sentimental favorite, “Feelings,” (a tune that I think really sucks). There are far better collections of pop tunes in movies and “The Devil’s Rejects” soundtrack comes first to mind. Breakfast on Pluto” is a quirky little film that has a brave but two-dimensional performance by Cillian Murphy.