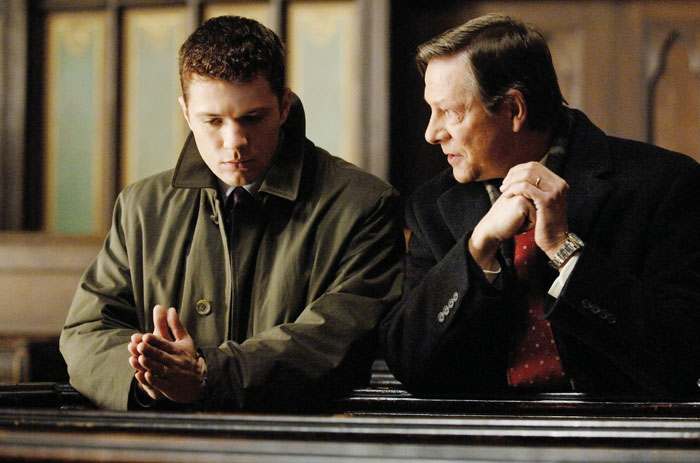 In February 2001, seven months prior to the worst terrorist attack in U.S. history, Robert Hanssen (Chris Cooper, "Seabiscuit," "Capote"), a twenty-five year veteran of the F.B.I., was arrested for treason. Over two decades, Hanssen sold secrets to the former Soviet Union, including presidential relocation plans in the event of nuclear attack, which cost the U.S. millions and the lives of many agents. In the history of the United States, Hanssen's spying was its worst ever security "Breach."

Cowriter (with Adam Mazer & William Rotko)/director Billy Ray, follows up his indie debut, "Shattered Glass," with another cat and mouse game featuring one man trying to ferret out the lies of a colleague, but while his bigger budget studio effort features a terrific character study from Chris Cooper, the film itself lacks the intrigue of his earlier effort. Ray made the paper pursuit of plagiarism more thrilling than espionage. Eric O'Neill (Ryan Phillippe, "Flags of Our Fathers") is an ambitious recruit gunning for a slot as an F.B.I. agent when he's approached by Kate Burroughs (Laura Linney, "The Exorcism of Emily Rose") for an unusual assignment - become the assistant to Russian Intel expert Hanssen to prove that the man has been posting sexually inappropriate content on the Internet. There have been complaints and the F.B.I. is hoping to avoid embarrassment right before the man's retirement. O'Neill is disappointed not to have secured a more important job, but is soon fascinated by his new boss, a devout Catholic and family man he comes to admire. Frustrated by his lack of progress, O'Neill demands that Burroughs 'read him into' the case and is flabbergasted to learn that he's been kept in the dark - the larger net is being cast for his boss for the worst act of treason imaginable. Having gained as much trust as Hanssen is willing to allow, O'Neill must now outwit one of the most intelligent and cautious men in the agency. The Hanssen case was a stunner and Cooper is simply exquisite creating a man who ultimately gave up his country to salve a wounded ego. Cooper's sharp, dark eyes are always on the lookout while their depths hold secrets and hurts. He's a rigid man guided by the rules of the Church at home while thumbing his nose at bureaucracy at work (he advises O'Neill to simply appropriate new computers left in the hallway and asks him to steal a colleague's painting from storage). Like his conflicted military man in "American Beauty," Cooper's character has inner sexual demons as well. O'Neill discovers a videotape he's been asked to send to East Germany documents his boss having sex with his wife (Kathleen Quinlan, 2006's "The Hills Have Eyes"). Other than a brief scene that establishes Hanssen's wife Bonnie as enjoying marital lovemaking, we're given no real insight into the pious on the outside, lusty on the inside marriage. Not so with O'Neill, whose job-imposed secrecy and creepy boss start to drive a wedge between him and his East German wife Juliana (Caroline Dhavernas, "Hollywoodland"). But Phillippe, a capable actor, isn't up to Cooper's standards. He gives an earnest performance and shows credible frustration over his marital difficulties, but he follows a couple of triumphs over Hanssen with a cat that ate the canary smirk, a blatant bit of overemoting. He does put across two critical bits of psychological maneuvering with more subtlety, however. Linney's very good delineating the private cost of an F.B.I. career and Gary Cole ("Talladega Nights: The Ballad of Ricky Bobby") is slick as F.B.I. insider Rich Garces, who inflames Hanssen's envy with his window office and artwork. In one scene as O'Neill's dad, Bruce Davison ("X2") is supportive without sentiment. "24's" former president, Dennis Haysbert, is typecast lending upstanding gravitas. The script focuses on character to the detriment of action, but its peeling away of personal layers is well done. Via the character of Kay, the writers succinctly illustrate the personal cost Hanssen's actions had on members of the agency, yet we never learn exactly who he was dealing with nor the value of his post Cold War spying. Still, despite one manufactured bit of suspense involving the replacement of a Blackberry, the cat and mouse interplay between Hanssen and O'Neill is always intriguing, right up until the climatic, baiting ego trip that sets the final trap.

Eric O’Neill (Ryan Phillippe) wants nothing more than to be a special agent for the FBI. He gets the chance to prove himself when he is assigned to assist (read: spy on) senior agent Robert Hanssen (Chris Cooper), a man suspected of selling national secrets to the Soviets and post Cold War Russians. The younger man’s undercover job is to reveal the traitor responsible for the United States’s greatest security “Breach.” Eric works hard to make an impression on the FBI bosses and is picked by Kate Burroughs (Laura Linney) who hands him a pager, telling O’Neill that he is on call to her, 24 by 7. Ordered to spy on Hanssen, he is to search for incriminating proof that the long-time agent has betrayed the nation. This begins a complex tale of trust, treachery, honor and respect as Eric gets the goods on Robert while growing to understand this intelligent, overlooked man whose bitterness with the FBI drove him to sell secrets. Director Billy Ray’s sophomore outing, following his excellent debut with “Shattered Glass,” shows us that the first film is not a fluke. “Breach” is a finely crafted work that combines a quiet, conversation-rich spy thriller with a pair of solid character studies by Cooper and Phillippe. This is one of those based-on-a-true-story films that really hits the mark, thanks to the cut-above writing by Ray, Adam Mazer and William Rotko (from Mazer and Rotko’s story). The dialog, especially Hanssen’s diatribes against how the system is run, is sharp and realistic. It helps that the veteran supporting cast flesh out their characters into living, breathing people. Joining Cooper and Phillipe are, as I mentioned, Laura Linney (as the head of the task force put together to take Hanssen down), Gary Cole, Dennis Haysbert, Kathleen Quinlan, Bruce Davison, Cariline Dhavernas as Oneill’s East German born wife, Julianna, and a host of other character actors richly people their many roles. Techs are outstanding with Tak Fujimoto handling lensing duties with his usual aplomb. The rest of the talented behind-the-camera crew deserve attention across the board. Usually, following the year end flood of star studded and award-nominated films, the doldrums of winter is usually the dumping ground, at the local Cineplex, for any an all comers that want to grab your bucks. Films like “Norbit,” “Hannibal Rising,” “Because I Said So,” and “The Messenger” are panned by critics but make the biggest box office. Maybe, just maybe, “Breach” will break into the ranks of these pretty bad moneymakers and give the film-going public something they can sink their teeth (and mind) into. It’s a good film with solid acting and script and a great second effort by a talent-to be-watched filmmaker, Billy Ray.