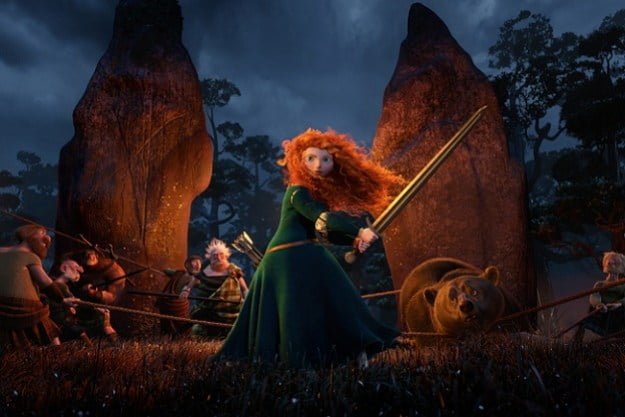 Princess Merida (voice of Kelly Macdonald, HBO's 'Boardwalk Empire') is the eldest and only daughter of King Fergus (voice of Billy Connelly), who's always encouraged her independent streak. Queen Elinor (voice of Emma Thompson), meanwhile, has tried to raise the girl to be a lady, which Merida chafes against. When the clans are called for Highland Games to determine who will receive Merida's hand, the girl becomes rebellious, visiting a witch where she receives a potion to change her mother. The results are not what she expected and in order to right matters, Merida must be "Brave."

It took a team of four writers to recycle 2nd tier Disney princesses and "Brother Bear?" Pixar has made much about their first female heroine, but they've treated her like a 2nd class citizen. In these writers' hands, Merida's 'feminist spirit' makes the character a rebellious brat and her prowess with a bow and arrow is a little late to the party (see "The Hunger Games's" Katniss Everdeen). The film's even been marketed like "Tangled" with its made-to-appeal-boys title. It's stunning setting in the most beautiful country on earth and a terrific vocal cast are not to be blamed here as both do much to delight, but "Brave" has done something no other Pixar film has done before - it bored me. The film begins with a prologue which will reverberate throughout. When Merida was just a wee wean, she was saved from a ferocious black bear by Fergus, who lost his leg to it. We reconnect years later, as the young girl steals dad's thunder by finishing his oft told tale to her triplet brothers Harris, Hubert and Hamish. She exasperates her mother by putting her weapon on the table and fidgeting through attempts to teach her the finer arts, preferring to be off on her Clydesdale Angus shooting targets. When her three suitors attempt to win her hand at archery, the method she herself has picked, Merida enters the contest to 'win my own hand' and does. After a nasty altercation with the Queen in which Merida cleaves a tapestry depicting them in two, the princess races off on Angus to the Standing Stones where will o’ the wisps lead her to the cottage of an old woman wood carver (of bears) who is obviously really a Witch (voice of Julie Walters, "Harry Potter's" Molly Weasley, design courtesy of "Snow White" and "Spirited Away"). After some anachronistic comedy, Merida heads back to Castle Dunbroch with an enchanted cake offered to mom as an olive branch. Mom changes all right - into a bear - and Merida knows that Fergus and the rest will assume that her mother is that other bear of legend. Perhaps the only part of "Brave" that works is Merida and her momma bear's bonding out in nature. Elinor learns how to catch salmon in a playful scene, but her eyes also grow dark as she increasingly loses her humanity (the curse becomes permanent after two weeks unless Merida can figure out the riddle to reverse it). But even here, Elinor is too saintly, too good for this selfish daughter who even now doesn't show enough remorse for what she's done, at least until they fall upon the cave of the bear that ate dad's leg and learn the awful truth. Cowriter (with Irene Mecchi, "The Lion King")/codirectors Mark Andrews (Pixar short "One Man Band"), Brenda Chapman and Steve Purcell make their feature debuts with "Brave" and fail to uphold the most important Pixar quality, a good story. The animators have done well by Scotland, capturing its striking landscapes and distinctive flora and fauna, but Pixar is known for creating their own worlds and some will o' the wisps don't cut it. One fears for the company's complete subsummation into the Disney machine with "Brave's" sidekick trio (who, of course, turn into three bears) and three suitors (voiced by the actors who also play their dads, blustery Lord MacGuffin (voice of Kevin McKidd, TV's 'Grey's Anatomy'), blue face-painted Lord Macintosh (voice of Craig Ferguson, "How to Train Your Dragon") and Lord Dingwall (voice of Robbie Coltrane). Patrick Doyle's score follows the screenwriter's recipe, employing all the sounds of Scotland one would expect without any memorable hooks. "Brave" is often stunning to look at. Merida's hair has a life of its own, all unruly carroty corkscrews and one can almost feel the cool moisture of a forest floor carpeted with moss and tiny wildflowers. These are the type of arresting visuals generated by computer that Pixar blazed the trail for. There's also Pixar perennial John Ratzenberger in the vocal cast playing the part of Gordon. If only I could remember who Gordon was. "Brave" has been paired with one of Pixar's lesser shorts, 2011 Oscar nominee "La Luna," with which it shares a simple story of traditions passed through generations.