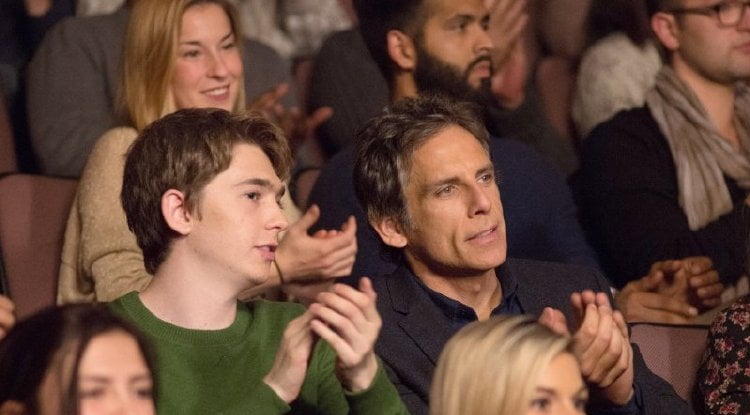 Brad Sloan (Ben Stiller) is in the midst of a midlife crisis AND he is on a trip to Boston with his son, Troy (Austin Abrams), to visit potential colleges. He wants to make the trip is special but, every time he tries, he is confronted with the fact that he is not a success like his old college buddies in “Brad’s Status.”

Brad Sloan (Ben Stiller) is having a sleepless night next to his wife Melanie (Jenna Fischer, TV's 'The Office') in their home in Sacramento. It's the night before he's flying out to Boston with his son Troy (Austin Abrams, "Paper Towns") on a college tour and he recently fell across an issue of Architectural Digest that featured his old college buddy Nick Pascale's (Mike White, "The Good Girl") stunning, multi-million dollar Hollywood home on its cover. The founder of a non-profit has a comfortable, happy life, but he's consumed by the monetary and celebrated success of friends he hasn't seen in years. Sloan's behavior will first embarrass, then concern his son as dad ponders "Brad's Status." Writer/director Mike White ("Year of the Dog," writer "Beatriz at Dinner") is unparalleled in his sensitive explorations of the human condition and he's only getting better. In these times when empathy is needed more than ever, White uses Brad Sloan to illustrate how surface judgements can cloud our thinking and how self doubt stifles us. Ben Stiller is becoming the face of midlife crisis after such films as "Greenberg," "The Secret Life of Walter Mitty" and "While We're Young," but he, too, reaches deep here, as Brad wrestles with himself in an interior monologue that serves as the film's narration. 'How much is your parents' house worth?' Brad asks Melanie in the morning's wee hours. Half awake, she brushes him off, thinking he's needlessly worrying they do not have enough for their son's college, but Brad's really worrying that he himself is not enough. Once the 'leader' of his college crew, he's now living in 'a secondary market surrounded by mediocrity and beta males.' In addition to the Hollywood director, his other old pals are tech entrepreneur Billy Wearslter (Jemaine Clement) now retired with two girlfriends in Hawaii, hedge fund founder Jason Hatfield (Luke Wilson) who jets around with his blonde wife and girls and former White House Press Secretary Craig Fisher (Michael Sheen), now an author and political pundit. The thought of the latter's wife, successful in her own right, sets Brad to wondering if sweet, open, Melanie, who encouraged him in his non-profit venture, might be to blame for his failure because she's too easily contented. At the airport, Brad decides he's going to step up and treat Troy to traveling in style, only to learn that his silver flyer card won't even allow him to pay $1,600 to upgrade to business class because he bought his tickets on a discounted website. Troy is unruffled while Brad stews. At their chain hotel that night, Brad learns that Troy's advisor believes he could get into any college he wants, including the one they're set to visit the next day - Harvard. Brad brightens immediately, imagining his musically gifted son becoming famous. But the next day plunges him back into tortured despair when he learns Troy messed up the day of his interview at Harvard. Troy's mortified as his father makes demands of the admissions department, who assures him an alumni interview in Sacramento will carry every bit as much weight. Brad learns that Craig Fisher is a visiting fellow and begins making phone calls to get his number and call in a favor. While Brad is the focal character here, White deftly weaves Troy's parallel experience into the mix, the young man not yet beaten down by the world having an entirely different viewpoint. This is best reflected in the friends he meets up with, fellow musicians Ananya (Shazi Raja, TV's 'Salvation') and Maya (Luisa Lee). Impressed with the young women, Brad slips out of another sleepless night to take up Ananya's offer of a drink, thinking she will understand him. He's in for a rude awakening when she calls out his white male privilege, several more following when he gets a belated callback from a distraught Hatfield then meets the utterly odious Fisher for dinner (Sheen brilliantly embodies the humblebrag, the backhanded compliment and mean-spirited gossip). Abrams, perfect throughout, gets his big moment in the film's climactic scene, a simple conversation with his dad that provokes Brad's epiphany. The production makes use of such Boston/Cambridge landmarks as the Mass Ave. bridge, Harvard Yard, Harvard Square, Tufts University and the Charles River yet was primarily shot in Montreal. Cinematographer Xavier Grobet ("Focus") stays on the move with Brad's nervous energy, editor Heather Persons ("The Hollars") elegantly cutting from current to past to imagined action. Devo's Mark Mothersbaugh, who scored White's 'Enlightened' series for HBO, adds the perfect musical accompaniment. With "Brad's Status," Mike White has orchestrated all the right choices to bring his profoundly considered screenplay to life. Grade:

Director/writer Mike White is a pretty prolific scribe, with credits dating back to 1998 with his debut feature script, “Dead Man on Campus” (plus many more since). I had thought, though, that he directed more than two features, the first being “Year of the Dog (2007).” I think that is because White’s imprint on his stories makes it feel like he directed all of them. Ben Stiller is perfectly cast as a smart, insecure man in the throws of what seems to be an ongoing mid-life crossroads. He chose to go into helping people after he graduated college, forming a non-profit company that helps other non-profits get funding. His former best friends, though, have gone onto fame and, especially, fortune and Brad feels he was left behind in life. Mike White (who makes a cameo as Brad’s filthy rich gay friend, Nick), uses a voiceover by Brad as his mind struggles with the perceptions he has of himself, mostly bad when he mentally compares his mundane, unsuccessful (to him) life to the posh, filthy rich, lives of his old friends. His mood swings are so deftly done that, at times, you want to slap sense into the man. There is an “It’s a Wonderful Life” quality to the story as Brad questions his life and accomplishments, not seeing how great his life really is with his loving wife, Melanie (Jenna Fisher), and smart, independent minded son, Troy, who is a credit to his father, and a career dedicated to helping people. Brad just does not realize this right away. Austin Abrams, although not a newcomer to film, makes a notable impression as the son who must, sometimes, act like a father to his own dad. Brad’s corral of old friends – retired software entrepreneur Billy (Jermaine Clement), business mover-and-shaker Jason (Luke Wilson), film producer Nick and writer/scholar Craig (Michael Sheen) – as he sees them, left him, lifestyle-wise, in the dust. While the rest are cameo performances, Michael Sheen gets a lot of mileage as the success that Brad thought he wanted, but realizes, finally, he does not. Although shot mostly in Montreal, there are a lot of exterior shots in Boston that will have the Bean town fans all abuzz. Like most people watching a movie shot in their own town, I was watching for the things that only a Bostonian would notice - such as Brad and Troy taking a casual stroll from the Mass Ave Bridge to Harvard Yard several times. We Bostonians say, “Yeah, right, you’re going to walk from Boston to Cambridge multiple times? I don’t think so.” Still,