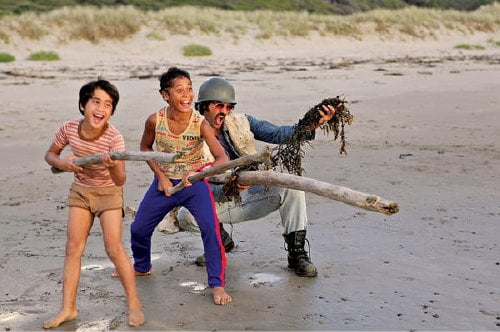 It is 1984 and 11-year old New Zealander, Boy (James Rolleston), adores Michael Jackson and longs to see his long-absent daddy. He gets his wish when his ne’er-do-well father, Alamein (Taiko Waititi), shows up on their doorstep in search of buried loot from the robbery that landed him in prison. The youngster, who has always idolized his long lost father, sees this as his chance to go off on adventures with Alamein in “Boy.”

It's 1984 on the eastern coast of New Zealand and 11 year-old Boy (James Rolleston) and his friends are so consumed with pop culture, especially Michael Jackson, that they are unaware of the poverty of their Maori community. When his grandmother must attend a funeral for several days, leaving Boy to tend to his younger brother and five cousins, the man he's romanticized into an outsized figure - his father Alamein (Waititi) - returns for the first time in seven years. Writer/director/star Taika Waititi has come a long way since his last film, the impossibly twee "Eagle vs Shark," with this inventive coming of age tale. From its pop culture addicted populace (Boy's brother is named Rocky (Te Aho Aho Eketone-Whitu), while his best friend is Dallas (Haze Reweti) and her younger sisters are Dynasty and Falcon Crest) to the exploits Boy imagines for his dad (deep sea diver, war hero, friend of Jackson) depicted by animations of Rocky's crayon drawings, "Boy" charms. Childhood in this rural area is paradise as seen through Boy's eyes, even if school vixen Chardonnay (RickyLee Waipuka-Russell) is unimpressed by his moonwalk. Things go to a new level, though, when Alamein pulls up with his two cohorts Chuppa (Cohen Holloway, "Eagle vs Shark") and Juju (Pana Hema Taylor, SHOtime's 'Spartacus: Vengeance') in his cool car (a Plymouth Valiant!). Alamein's first night is made magical by the show he puts on using such props as sparklers and ensuing days are filled with adventure like digging for the 'treasure' dad tells his boys he buried in a field. But dad's really just out of jail looking for his loot and when Boy succeeds in finding it, it's the beginning of Boy's disillusionment with dad. Waititi made this film in his own home town and its full of local culture. The most responsible adult appears to be Aunty Gracey (Rachel House, "Whale Rider"), the woman who runs the post office and local shop where Boy and his friends hang out. An older Maori man who still lives on the beaches of Waihau Bay is called Weirdo (Waihoroi Shortland) and is mocked by the kids, perhaps for his old ways. We never discover if the marijuana growing hidden in local fields is cultivated, but Alamein is sure happy Boy knows where to find it and the land ends up providing when crime truly turns out not to pay. Despite one dark night when Boy really sees his father for what he really is, Waititi keeps his tone light and whimsical. Boy never abandons his dad, even after realizing he's the more grown up of the two. They have both, after all, suffered the loss of Boy's mother, who died in childbirth with Rocky. "Boy" is the polar opposite New Zealand coming of age tale to Lee Tamahori's urban set "Once Were Warriors." Stick around for the end credits featuring the entire cast engaged in a Michael Jackson dance-out.

This is a good-natured, goofy and often charming little coming-of-age comedy that is bright, light and fun. Young James Rolleston has charisma to spare as a boy with a vivid imagination and a real hero worship for his (undeserving) dad. Alamein was never around for his son. In and out of prison, he is more of a child than his son and was not there when Boy’s mother died. But, Boy can forgive this indiscretion because, with Alamein’s arrival, he now has a new playmate. The combination of goofy slapstick humor and thoroughly amusing characters make writer-director-star Taika Waititi’s down under tale about growing up a pleasure to watch. Boy may only be 11 but he readily bears the responsibility of taking care of his family. Alamein, who gives himself the nickname Shogun, is the opposite of Boy and thinks that looking and acting cool is, well, cool. He is anything but cool. There are other colorful, eccentric characters on hand, including Rocky (Te Aho Eketone-Whitu), Boy’s six year old brother who thinks he has telekinetic super powers. “Boy” is a genuine family film with the title character an excellent role model for kids. He is bright, industrious, and responsible, takes care of his family when grandma has to go away for a week and is every good thing that Alamein is not. Dad is a case of arrested development with delusions of grandeur. The contrast between them is extreme and it is obvious just who is the grown up. There is a lot of humor in the Waititi’s clever script and, while I did not laugh out loud, I always had a smile on my face. The film looks great with the east coast of New Zealand providing an excellent location and lenser Adam Clark puts it to good use with his crisp, clear photography.