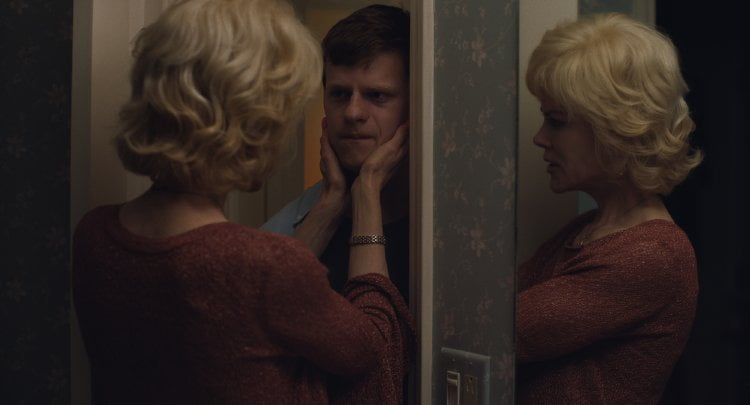 Jared (Lucas Hedges) is outed by his conservative Baptist father (Russell Crowe) and mother (Nicole Kidman) and shipped to the Refuge Program to cure him of his homosexuality. He reluctantly agrees but is not prepared for the program that will try to make him a “Boy Erased.”

'I wish this had never happened, but sometimes I thank God that it did,' Jared Eamons (Lucas Hedges) tells us as we see him prepare to leave the house with his mother Nancy (Nicole Kidman) before dawn. She drops him off at Love in Action, where she is denied access to the facility beyond its reception lobby. Jared is hopeful as he enters, but quickly grows concerned that he is about to become a "Boy Erased." After Desiree Akhavan's Indie "The Miseducation of Cameron Post" earlier this year, along comes writer/director Joel Edgerton's ("The Gift") more high profile, male take on the same subject, this one adapted from Garrard Conley's memoir. Both films deal with gay conversion therapy in religious communities, both go out of their way to present adult guardians and facility staff as well intentioned and both feature the inevitable suicide of a supporting player. This is the slicker production and while it is better than the prior film, largely due to its cast and a more definitive ending, it also lacks bite. Despite Hedges' and Kidman's fine performances, except for a welcome swipe at the patriarchy everything about the film feels preordained. Flashing back from its opening, we learn Jared is the son of Baptist minister Marshall Eamons (Russell Crowe) and lives a comfortable life in a loving home. When he asks if he can go to a party at the lake, his beaming parents send him off with his girlfriend with something like a 'nudge, nudge, wink wink.' But Jared stifles her sexual advances, quietly breaking off their relationship as he heads to college. Fellow student and runner Henry (Joe Alwyn) takes him under his wing, but when Jared invites Henry back to his dorm, Henry comes on to him. A confused Jared is raped, Henry breaking down in shame, begging for forgiveness afterwards. Back at home, the Eamons receive a disturbing phone call outing their son. Confronted, Jared initially denies everything, but in revealing he knows who made the call, he eventually admits his attraction to men. His parents are stunned. The pastor calls in religious elders who recommend Love in Action. Family physician Dr. Muldoon (Cherry Jones) gently tries to tell him he's perfectly normal, but Jared says he wants to change. But the Draconian rules at Love in Action (a prudish dress code, sobriety, no cell phone or journals, even supervised bathroom visits to prevent masturbation) immediately rub Jared the wrong way. Center head Victor Sykes (Joel Edgerton) initially seems to say the right things, but the first exercise he gives Jared's group is to link family members to a list of sins including alcoholism, homosexuality, drug addiction and gang membership as a means of sussing out the genesis of theirs. Oh, and nothing that happens within Love in Action's walls may be discussed with anyone, including the parents who are paying for its treatment. One set of parents irate that their boy was pummeled in a batting cage, a sports exercise to generate 'manliness,' illustrates why. Homosexuality may be against her religious beliefs, but Nancy, who is sharing a hotel room with her son during his therapy, begins to pick up bad vibes. Eventually Jared shares his exercise binder with her. She's initially amused, telling him of her drug dealing gang past, but when Jared reaches his breaking point, Nancy's there to support him, denouncing Sykes as a fraud and apologizing to her son for having gone along with the plan, her mother's love stronger than her Baptist beliefs. Now they must both face the pastor. Kidman's been on a roll with mom roles and she's made each of them distinct, here a conservative beauty with coiffed blonde hair, elaborate makeup and glittery ensembles. She's a glamorous asset for the husband who truly adores her. Crowe, who observed the real pastor in action to prepare for his role, is a soft spoken man of God, far from the roles we are used to seeing him in, but not a very impactful one. This is primarily Kidman and Hedges' show and the young star is very good, his sexual orientation initially expressed as a subtle interior panic, his resolve shaped by his observations of Love in Action's conflicting messages and impact on its patients. Supporting players include Flea, looking like an old tatted drill instructor as Sykes' right hand man Brandon and Canadian filmmaker Xavier Dolan as Jon, a chastely consentual romantic experience in Jared's past. Other members of Jared's group include Britton Sear as Cameron, who endures the most humiliating abuse and proves a champion for Jared, Jesse LaTourette as haunted lesbian Sarah and Roye Sivan, as Gary, who looks like one of South Park's Goth kids and advises on gaming the system. Sivan also cowrote and sings the film's original song 'Revelation.' While that song is lovely, the score by composers Saunder Jurriaans and Danny Bensi is annoyingly high in the film's sound mix, a distracting element in an otherwise fine production. "Boy Erased" makes its case that gay conversion therapy is wrong headed and harmful form of self denial, those 'cured' perpetuating the abuse, but it is Jared's self discovery and his family dynamics that are the film's more distinguishing elements. Stick around for the film's expository end titles which provide some ironic updates to the characters we've seen portrayed. Grade:

Joel Edgerton wears four different hats in his feature film directing debut – he also adapts Boy Erased, Garrard Conley’s memoir, produces and co-stars as the Refuge Program head, Victor Sykes. His focus, though, is on his titular character, Jared, and the turmoil, confusion, anger and bewilderment he goes through because of his parents’ betrayal to their son. “It’s for your own good,” his mom tells him as he is taken away. As I watched this true-life story about gay-conversion “therapy,” I thought about the United States Marine Corp. The Marine philosophy is to take the new, raw recruit and shape him/her into a team member with the ability to think for themselves. The conditions and training can be harsh for the newcomer to the Corp but, unlike conversion therapy, does not destroy that recruit and their very being. The adaptation is a sanitized look at “conversion therapy,” a method that tears down any individuality (like sexual preference) and replaces it with politically correct thoughts and behavior. The problem is, it does not work and, as Edgerton shows, it causes far more harm, socially and emotionally, than it helps. We see the experience through Jared’s eyes as he is forced to submit to the “re-education,” which includes constant surveillance and everything but actual physical abuse. Hedges proves to be a capable young actor and hold’s the film’s focus, conveying the confusion, feeling of betrayal and anger at both the Refuge Program and his parents. The rest of the inmates and jailors we meet are two dimensional, with one exception, Troye Sivan as a savvy inmate who counsels Jared on survival. Nicole Kidman, as Jared’s mom, is given the chance for character development and arc, getting the requisite Oscar-contender speech towards the film’s end. Russell Crowe does nothing notable as the evangelistic dad, Marshall. The civil libertarian in me has a real problem with the whole idea of conversion therapy in any form. This is far different from organizations like AA that helps people with real addiction problems. I have never considered sexual gender preference a pressing social issue and the inmates of those conversion therapy programs probably agree.