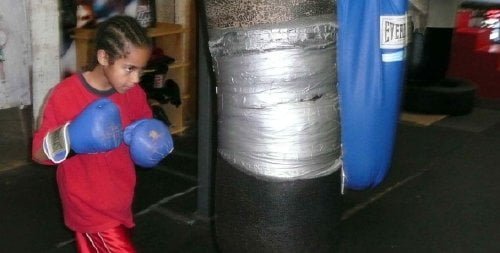 Uber-documentarian filmmaker Frederick Wise breaks new ground, once again, as he brings his cameras to give us a candid look at the boxing ring in his exceptional analysis of the sport as he journeys to Austin, Texas to visit Richard Lord’s “Boxing Gym.’

In Austin, TX, Richard Lord doesn't go in for high tech marketing - the sandwich board outside his place doesn't even include an area code. But in his humble building is a crossroads of people, young and old, fit and fat, male and female, American and foreigner, who all have their reasons for being at Lord's "Boxing Gym." Octogenarian documentarian Frederick Wiseman ("Titicut Follies," "La Danse - Le allet de l'Opera de Paris") hasn't lost a bit of his skill. His latest, "Boxing Gym," is a beautifully assembled contemplation on one place where a sport is taught by old pros. Wiseman intercuts scenes of Lord teaching technique and patrons' conversations - which range in subject from moving to Houston to a humorously botched robbery - with mesmerizing reveries of repetitive movement. It's simply amazing how Wiseman can make punching the speed ball, tossing the medicine ball or various forms of sit-ups so Zen-like. The director, who also edits picture and sound, also achieves a meditative, rhythmic flow by how he edits his sound, carrying the echoes of a previous scene into the next so that there is never an abrupt transition. His filmmaking is like the joy of music and dance professed by a Mexican musician. I personally have little interest in the sport of boxing, but Wiseman's film will give anyone an appreciation for it - it's a tough and demanding sport. Lord, a former Pro, is also a fantastic host, a democratic mentor who welcomes the 40th birthday gift of boxing from a wife to her husband, the needs of an epileptic boy or the crying babies of working women into his establishment. (In one scene, a hirsute, muscular man punches the bag with a baby in a carrier sitting on the floor behind him, recalling Mac in "Local Hero" asking a group of guys, 'Whose baby?') Getting audiences outside the area of interest to "Boxing Gym" may be a tough sell, but anyone who appreciates the art of documentary filmmaking will be glad they bought. It's marvelous.

Writer-director Shana Feste, with her talented cast of characters, creates a story about midlife crisis, coping with an aging parent and raising a teen son as a single mom. The mother, though, is in scant control of her life as the executive assistant to a demanding patron who wants things like procuring a rare Siberian tiger for her daughter’s sweet sixteen party. Then, Laura talks to her dad and, out of the blue, she has to find a place to put Jack. She decides on her hippie sister, Jojo (Kristen Schall), who lives way down south in LA. Laura just wants to be rid of her wayward dad and move on with her life. Then, he drops the my-life-is-near-the-end bomb. Now, instead of putting him on a plane and being done with him, Jack tells her that she must drive him the hundreds of miles to Jojo. The ensuing road trip, with Laura, Jack and Henry, begins, but is soon interrupted by Jack’s own plans. What follows are a series of stops where Jack, and new partner Henry, does business selling pot (a lot of pot) to his old friends, including a Buddhist monk and Jack’s good buddy, Stanley (Christopher Lloyd), a true free spirit, who, with Plummer, represent the funny old guys being naughty. The quirky characters and the road trip that Laura and her family take are likable enough but the story has been done before - the estranged family must face a daunting task and, in the end, bond once again.