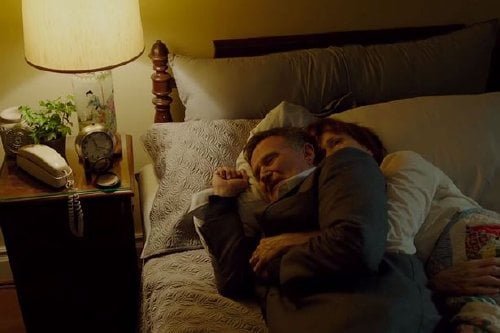 Nolan (Robin Williams) has lived a solitary life even though married to his wife, Joy (Kathy Baker) for many years. They have, in essence, lived apart with separate beds, separate rooms and separate lives. His father, suffering from Alzheimer’s disease, has a heart attack. It is not fatal but it is the catalyst for Nolan to find his unfettered self on the “Boulevard.”

Nolan Mack (Robin Williams) is a sad sack loan officer at SMB Bank whose biggest fear is hurting other people. One night on his way home from visiting his catatonic dad at a nursing home, he impulsively makes a U-Turn, driving slowly by the male prostitutes that work the street, inadvertently running into Leo (Roberto Aguire). When Nolan accepts Leo's request for 'a ride,' he'll end up hurting more than the young man he just ran into on the "Boulevard." Here it is, the late Robin Williams' last onscreen appearance to be released, and it is difficult to ignore the face of a man who appears to just want to end it all - was Williams playing Nolan or expressing his own inner demons via the role he chose? Williams' scenes together with Kathy Baker ("The Age of Adaline") as his wife, the ironically named Joy, are terrific, the two actors capturing something real and subtle, but the film as whole fails due to the sledgehammer approach of Douglas Soesbe's script, which director Dito Montiel ("A Guide to Recognizing Your Saints") does little to alleviate. Nolan resists Leo's sexual advances, instead paying for his time, his increasingly affectionate gestures putting the young man off balance. But as soon as he made that fateful decision, his present life begins to spiral out of control. Although Nolan clearly loves his wife, they do not share a bedroom, nor, hardly a life and when Joy begins to catch him in lies, she circles around the obvious rather than confronting it head-on. In Soesbe's hands, though, everything else about "Boulevard" is painfully obvious, from our first glimpse of Nolan at work, approving a home loan for the gay couple his boss Beaumont (Henry Haggard) disparages. When Beaumont's still angling for Nolan's promotion after he's been shaken down by Leo's pimp Eddie (Giles Matthey, "Jobs") in front of a crowd in the bank's parking lot, you may be rolling your eyes in disbelief. This is the type of Indie film that mistakes relentless misery for high art. Williams is so enervated here, it's difficult to connect with his character's reawakening, especially acting against the inexperienced Aguire whose Leo is a little too little-boy-lost. His performance is markedly more affecting when playing off pros like Baker and 'Better Call Saul's' Bob Odenkirk as his best buddy Winston. At Williams' insistence his cut coming out scene to his unresponsive dad was reinstated - good move. But "Boulevard's" script needed at least several more turns around the block to find the best avenue to tell its tale. Grade:

This is Robin Williams’s last live action feature but, unfortunately, not the swan song it should be. There is sadness in his performance that seems to transcend his character, Nolan. This sense of sorrow in the film has nothing to do with Nolan’s character and his foibles – maybe this is my flawed interpretation of the story and those who populate it – but it colored, negatively, my reaction to the film. Sadness aside, it is hard to wrap your arms around any of the characters, except for Kathy Bates as the wife who lived as Nolan’s beard, giving the world the pretense of his being straight. The scenes between Williams and Bates are the best in the film but, alas, all too brief. The other main character in the film is Leo (Roberto Aguire), the young main who stirred Nolan’s curiosity on the titular thoroughfare. The actor, his character or direction simply rings false – there is far too much innocence for a supposedly street wise male prostitute. I just did not get it. “Boulevard” is a big disappointment to me. I wanted Williams to go out with a bang, not a whimper.