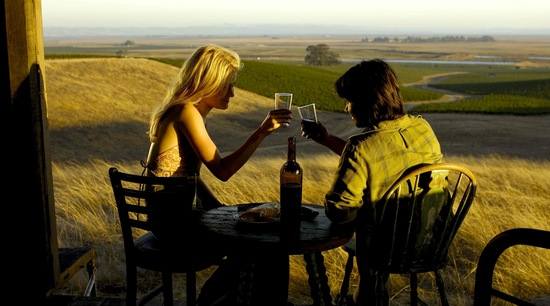 Wine connoisseur and merchant Steven Spurrier (Alan Rickman) is in a rut. His Paris-based shop has few customers and, being a Brit, he is spurned by the snobbish French vintners. One day, in 1976, he is informed by American expatriate acquaintance Maurice (Dennis Farina) that there is a lot of noise in the business about the Californians now producing some seriously good wines. Spurrier journeys to the Napa Valley, finds the rumors are true and brings the California wines to Paris for a nose-to-nose blind tasting against France’s finest in “Bottle Shock.”

British Steven Spurrier (Alan Rickman, "Harry Potter and the Order of the Phoenix," "Sweeney Todd") wants to be taken seriously by the French Wine Federation. His little Parisian wine shop, a self-proclaimed 'Academy of Wine,' only ever seems to have one customer, though, the American owner of the limo service next door. Maurice (Dennis Farina, "You Kill Me," TV's "Law and Order") may only perpetually taste Spurrier's wines instead of buying them, but it is his idea which will catapult his friend into viticultural history in "Bottle Shock." Perhaps inspired by the success of "Sideways," cowriter (with wife Jody Savin, based on a screenplay by Ross Schwartz)/director Randall Miller ("Marilyn Hotchkiss Ballroom Dancing & Charm School") has taken the exciting true life story of a 1976 blind taste testing in which the French unwittingly declared two Napa Valley wines superior to their own and turned it into an atonal hodgepodge. The central story, that of Spurrier and his contest, is terrific, as is the fictional character of Maurice, but the filmmakers felt compelled to let us get to know the California wine makers, and while the cultural differences between Californians and the French in 1974 would seem a natural inclusion, the Barrett family, owners of the Chateau Montelena whose Chardonnay came out on top, are given too many family dynamics and story offshoots which dilute the vintage. Most egregious is the treatment of the character of Gustavo (Freddy Rodríguez, "Poseidon," "Bobby"), the son of a Mexican immigrant who works for the family and is an up and coming vintner. He's an expert. He's dispensable. He's a love interest. He's dropped for the lead with no evidence of consequence. He's got a great wine being tasted at the Parisian event. We never learn how it fared. In the Napa Valley, long-haired surfer dude type Bo Barrett (Chris Pine, "Smokin' Aces," the new Captain Kirk in 2009's "Star Trek") moans when his dad, Jim Barrett (Bill Pullman, "You Kill Me") states that their chardonnay must be racked again, an unprecedented fifth time. Bo doesn't care that the wine isn't clear. Bo actually doesn't care about much but living from day to day and having a good time. When their new intern, Sam (Rachael Taylor, "Transformers," "Shutter"), arrives, Bo's astonished to discover Sam is a good looking blonde, but Sam proves to be a hard worker and no easy pickup. Clearly she's meant to be good for Bo and when he asks if she thinks he's a loser she holds out hope for him that makes him determined to turn himself around. It's Gustavo's amazing cabernet, however, that seduces Sam. Learning that Chateau Montelena is almost broke, Bo drives to his mom's country club and hits her up for the funding needed to obtain some extra barrels, enraging Jim. The Barrett saga picks up briefly with the true life incident of their product turning brown due to Jim's almost impossible perfectionism in allowing no oxygen to interact with the wine. The Barretts don't know the cause and Jim gets drunk and arranges to have all 500 cases hauled away and dumped. Bo and Sam hunt down an expert who figures out the cause, but they're too late. Time for fictional character, bar owner Joe (Eliza Dushku, TV's "Buffy the Vampire Slayer," "Wrong Turn"), another woman with a man's name, to come to the rescue (Joe's the type of bartender who keeps $50 bottles of wine hanging around - in 1974, when Chateau Montelena's Chardonnay was considered expensive at $6). Meanwhile, Bo and Sam have been driving the English wine snob to various vineyards and Bo further enrages Jim by slipping Spurrier two bottles of their Chardonnay to take back to France (Jim is convinced Spurrier only wants to make the Americans look bad). Jim cuts Bo off. He also fires Gustavo for having produced his own wine while working for the Barretts. OK, so we're supposed to get the idea that Jim is pigheaded, but he only seems displeased by shows of initiative. Then there's the outdoor boxing ring where Jim and Bo settle their other disputes. Sam's so clearly earmarked for Bo, that her (much more convincing) attraction to Gustavo is treated like a wine commercial (dusk's beautiful magic light plus great grape equals sex). Chris Pine is OK as the likable, puppy-doggish Bo, but the more experienced Pullman isn't gruff enough for his character's conflicted actions. He's soft and ineffective. Taylor does what she can with an objectified role (Miller even uses her for a wet t-shirt type entertainment for the vineyard workers). Freddy Rodríguez seems the most like a real person of the California bunch. Rickman's wonderful with his mournful voice and misunderstood intentions and his pairing with Farina is a surprisingly good one - the refined Brit and the crassly commercial American (kudos to the costumer who located Farina's suit for the tasting event). The final tasting lacks the tension it should have had. The vintage Time magazine article included in the press notes makes mention of several embarrassing comments made by the distinguished panel - an identification of the wines for the audience may have made this scene play more humorously.

My dad was a huge jazz fan in the 1950s and I remember him (fondly now, not so much then) playing his favorites – at ear splitting volume at 2:00 AM. One of the jazz greats that dad loved to listen to was Chet Baker. I remember looking at his album covers but I did not know much about the iconic trumpet player. Writer/director Robert Budreau corrects this lack of knowledge of the man and his music with a reimagining of the life of Chet Baker. Ethan Hawke is impressive in his performance as Baker and brings out the confidences, insecurities and addictions that shaped the man. His early professional life shows a trumpet playing man at the top of his game. This career is ruined, though, when he is severely beaten because of drugs and his front teeth are smashed in. Years ensue as Baker tries to get his magic back, with the help, love and dedication of Jane (Carmen Ejego), who represents the women in the musician’s life as helper, lover and muse. There is very nice chemistry between the two. “Born to Be Blue” shows the life of a very complicated and insecure man whose addictions almost destroyed him. It is also about the woman who helped him through his worst days. The music is cool, too.