Both Sides of the Blade 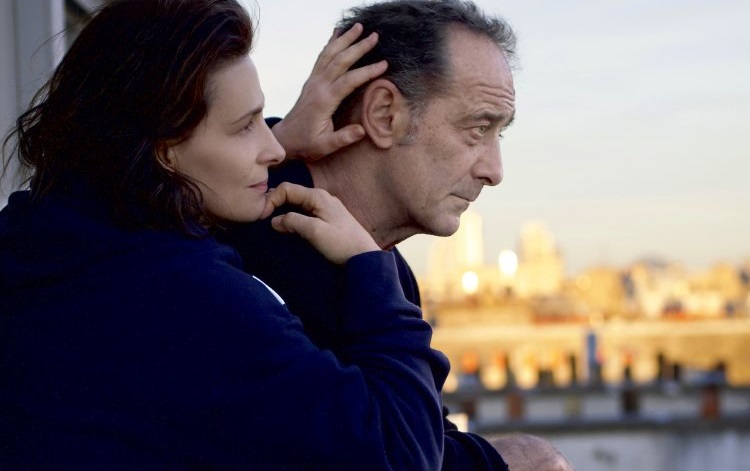 Sara (Juliette Binoche) has just returned from a romantic, sensual getaway with her husband Jean (Vincent Lindon) when she spies her former lover and Jean’s old friend François (Grégoire Colin), the man she left for Jean, on the street.  When François calls the unemployed Jean, a former pro rugby player, suggesting he come to work for him as he sets up a recruitment agency, Sara becomes openly obsessed, wanting to live life on “Both Sides of the Blade.”

Cowriter (with "Let the Sunshine In's" Christine Angot)/director Claire Denis won Berlin’s Silver Bear for Best Director with this adaptation of Angot's novel featuring many of her favored actors, but it is difficult to get emotionally involved in a love triangle whose central character is so self-centered she shoves her desire for another man in her partner’s face.  Even the usually faultless Juliette Binoche falters here, so overcome with desire at the sight of another man she practically melts down in an elevator, an almost laughable bit of overacting.  She rights herself when facing Lindon after this encounter as we see her character regard this man through new eyes, but she never regains sympathy, letting the air out of our involvement.

And yet, Denis’ refusal to spoon feed us her trio’s back story keeps us engaged, her film becoming something like a psychological thriller.  Along the way we learn that after Sara left François for Jean, Jean went to prison for an extended time and is now looking for work.  It is implied that this prison sentence had something to do with François, but we never find out what, nor is it clear why he’s chosen this moment to contact Jean.  Jean is in a vulnerable position, awkwardly requesting the use of Sara’s Visa card to do the shopping.  He also has a biracial teenaged son, Marcus (Issa Perica, 2019's "Les Misérables"), who lives with his mother Nelly (Bulle Ogier) a three hour drive away and he seems to be prioritizing his career over his son, neglecting to meet with the boy’s teacher.  Marcus is in a downward spiral, having abused his grandmother’s Visa card without her knowledge.  Meanwhile, at Radio France Internationale where Sara works as a DJ, she interviews an author about his book on racism.

But while many of these tantalizing tidbits offer behavioral parallels, then never really add up.  After openly telling Jean how important François was in her life, Sara begins seeing him behind Jean’s back, then creates a huge drama about whether she should show up at their agency’s opening.  After agreeing that it would be best not to, she arrives anyway, serving herself up to François on a platter in a low cut shoulder baring dress.  Who behaves this way?  Ironically, Sara’s sexual interludes with Jean are much hotter (although she might be fantasizing that he is the other man) than those with François, who attempts anal intercourse despite her objections.

In the end, “Both Sides of the Blade” ends in an appropriately ironic place, but Vincent Lindon’s Jean is the only character to care about here and he’s an irresponsible father.  The film also stars Mati Diop ("35 Shots of Rum") and Bruno Podalydès.

Sara (Juliet Binoche) and Jean (Vincent Landon), a former rugby star, have lived a loving and idyllic life for ten years. Then, she catches a glimpse of her past lover, Francois (Gregoire Colin), the owner of a sports agency, on the streets. Her rekindled feelings, almost obsession, for the man put her life and happiness with Jean in jeopardy in “Both Sides of the Blade.”

As I watched “Fire” (one of its original titles), I actually felt like I was watching two different movies. In one, we have Jean struggling with his past mistakes – he did prison time (unexplained) - while trying to make a new future for himself. That story is intriguing and Landon does a fine job of portraying Jean and his personal and professional problems that are intertwined.

Then, there is Sara’s story. This one is more complicated than Jean’s in that hers is based on lies and deceit and involves a long-time passion between Sara and her old flame Francois. The two plotlines develop separately as we learn that Jean, unable to work in sports because of his prison record, contacts (or is contacted by) Francois about a job as a scout in the guy’s new sports agency.

Then, there is the chance (or is it) sighting Sara makes of Francois near the Metro station where Jean drops her off. We get the vibe, right away, that Sara feelings for Francois are still burning. Okay, so we have an unrequited love between the former couple being rekindled by her with his eager participation. This puts a target on Jean’s back as he senses something is not right.

Here is where I have problem with “Both Sides of the Blade.” This story is supposed to be about three mature professions, two of whom (Sara and Jean) have been living happily together for ten years – which is confusing since Jean was imprisoned for some undeclared crime but was it before or after he and Sara got together? These details were vague and sometimes inconsistent.
The lies and deceit are had, in varying degrees, by all three of the players. The difference is that for one, Jean, it is about not being honest about his life problems – having a criminal record, unable to get a real job and he has a mixed race son who lives with Jean’s mom, Nelly, and is estranged from his dad. Nelly, by the way, has been raising the fast growing up child and wants Jean to take responsibility. Jean also once basked in the attention of a rugby star.

Sara and Francois, on the other hand, have a long and torrid past and she is unwilling to let it go. This is despite her vehement denials to Jean that anything is going on with Francois. The problem is the lies are so bald-faced that I could not believe that he would believe her.

This is supposed to be about three mature adults and their romantic triangle. What it feels like is a screenplay about three twenty-somethings trying to find their way in life. Instead, it is about a woman who wants to have her cake and eat it, too, in her romances. I neither bought it nor liked it, at least in part.

IFC Films opens "Both Sides of the Blade" in select theaters on 7/8/22.