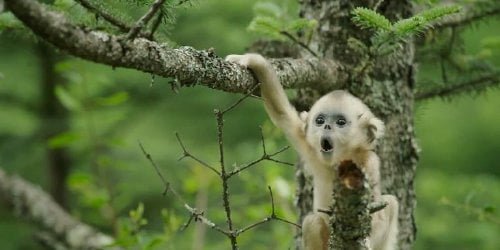 The first image we see is the crane, the symbol of China for its strength, grace and beauty. Then, narrator John Krasinski introduces the rest of the subjects – monkey, panda, snow leopard and antelope – that are “Born in China.”

In a country with widely diverse climates and terrain, the crane is revered as a symbol of longevity and good fortune, said to carry the spirit of a departed creature from this world to the next whenever it takes flight. Monkeys represent mischief and rebellion. Rare pandas and snow leopards live solitary lives, new mothers enjoying brief interludes of love rearing their cubs. Conversely chiru, commonly known as Tibetan antelopes, are a herding animal yet its females travel far from their males to give birth at a legendary lake, the reason why a mystery. They are all "Born in China." Since 2008, Disneynature has been releasing their own brand of nature documentaries to celebrate Earth Day in April. With noted Chinese cowriter (with David Fowler, Brian Leith and Phil Chapman)/director Lu Chuan ("City of Life and Death") at the helm, the series' first entry into China is their most stunning release to date, the landscapes as breathtaking as the creatures which inhabit them. Chuan's use of the crane to propound on the cycle of life helps take the sting out of seeing one of the film's majestic animals succumb to the fight for survival. While earlier entries have leaned too heavily on anthropomorphization, Chuan and his team, who spent three years on the film, waited for stories to unfold naturally. Narrator John Krasinski may add whimsical touches, but what we're seeing as he speaks supports the screenwriters' emotional conclusions. Take, for example, the story of Tao Tao, a young golden snub-nosed monkey who feels out of place after the birth of his little sister. With attention drawn exclusively to the baby (which, by the way, looks amusingly like the infamous Weekly World News's Bat Boy), Tao Tao joins Rooster's troop of 'disaffected youth,' a group the filmmakers call 'The Lost Boys.' This may sound fantastical, but the idea is born out, Tao Tao's father coming in to attack Rooster, a monkey he'd previously injured. The filmmakers also capture an incredible moment when Tao Tao saves his sister from being picked off by a goshawk, their cameras swooping through foliage to give us the predator's point of view. In the Wolong National Nature Reserve in the Sichuan Province we find Ya Ya and her cub Mei Mei. The mother constantly coddles her little one, but Mei Mei begins to chafe, seeking freedom. The little one is batted down as it attempts to climb trees (and falls down, a lot), but eventually Ya Ya has to let go. Even cuter than Mei Mei are the young chiru, whose wobbly legs support them a mere thirty minutes after being born. These gawky little ones dance with joy. The adult males are breathtaking, their long, graceful black horns reflected in the black markings which distinguish their legs. But the most amazing footage comes from Qinghai province, on the northeast rim of the Tibetan plateau at an elevation of 14,000 feet. There lives snow leopard Wada, her markings camouflaging her against the painted rocks in which she lives. Wada hunts the feral sheep which graze in her territory to feed her two female cubs, but when a female with three male cubs challengers her, she must retreat to new ground. There she suffers an accident on unfamiliar terrain and her attempt to take a young yak is thwarted by its mother. Composer Barnaby Taylor's orchestral score, which incorporates Asian instruments like a Tibetan horn, Mongolian fiddle and Chinese dulcimer, riffs on the movements and emotions of the animals. Stay through the film's closing credits, which shows us the incredible lengths the filmmakers went to and how the golden snub-nosed monkeys tried to assist. Cinematographer Rolf Steinmann, who shot the chiru footage, is hilarious, viewed sitting high atop a peak through mist, hail and snow, always hoping that another half hour will bring the light he's waiting for. Grade:

Disneynature brings us amazing look into the little known world of the wilds of China and its varied residents. The first nature film from the newly formed nature arm of the Disney Empire was “Monkey Kingdom (2015)” about a little toque macaque monkey, named Maya, and her baby, outcasts from their tribe, struggling to survive in the dangerous jungles of Sri Lanka. The Disneynature project this time is much broader in scope and travels to the rugged outer edges of China to bring us into the lives of three animal families. We meet Dala, a snow leopard living at an altitude of 14000 feet, as she raises her cubs in the most harsh climate and terrain imaginable. Giant Panda mom ya-ya and her baby live a solitary life in the bamboo forest as she prepares her cub to gof off on his own. Finally, two-year old golden snub-nosed monkey Tau-tau has to cope with a new little sister and a new rebellious streak. As in “Monkey Kingdom,” the filmmakers anthropomorphize their subjects to help us, especially kids, see that we are all equal partners in the survival of earth and all its creatures. “Born in China” gives us an intimate look into the life (and, sometimes, death) of incredible animals that most of us have never seen before. We have seen pictures of a snow leopard, one of the world’s most elusive and rare big cats. But director Chuan Lu and his dedicated crew bring unprecedented video footage (taken over the course of four years) of Dala and her babies as she struggles against the elements and interlopers on her territory. Just as remarkable is the intimate footage of ya-ya and her baby as she raises her boy and teaches him to be safe – all while consuming about 40 pounds of bamboo a day! Tau-tau, the monkey, a sullen teen if he were human, rebels against his family and joins the “Lost Boys,” the equivalent of the Sharks or the Jets in “West Side Story.” All the subjects, as I said, are given human qualities and emotion by some deft editing of the massive amount of footage. When Yaya’s baby begins climbing trees (a panda escape mechanism), he meets a cousin, a red panda, then subsequently falls out of the tree and rolls down a hill. The camera cuts to the red panda and his expression says, “Dumb kid!” The film is full of such moments, making it a great hook for the kids it targets. (Parents will enjoy it, too, as the film and their adventures are so well done on all levels.) I give high points to Disneynature for upholding the tradition of the company’s long history of creating true-life adventure films in the animal kingdom, since the 1950s. “White Wilderness (1958)” is just one of those films that I vividly remember – who can forget a little wolverine taking on a pack of wolves? “Born in China” takes the nature movie a huge step forward with its high-tech equipment capturing an unprecedented look into nature.