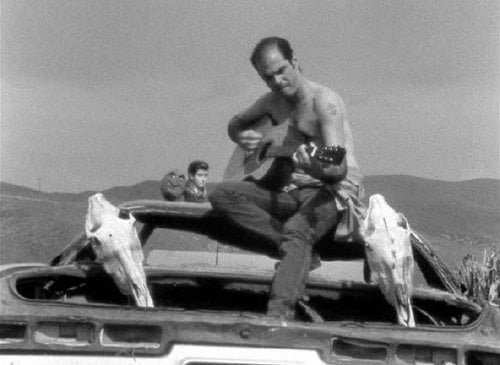 Jeff (Chris D.) is a singer/songwriter gone suddenly missing. Band mate Dean (John Doe) and loyal roadie Chris (Chris Shearer) are worried by his disappearance after they robbed the promoter who tried to cheat them. Their problem is that Jeff is nowhere to be found – and he took the loot with him in “Border Radio.”

When Jeff Bailey (Chris D., founder and lead vocalist of punk group The Flesh Eaters) disappears, his record label won't hand over royalties until he shows up to promote his band's last record and his wife, Lu (Luanna 'sister of Allison' Anders), thinks she knows where he's gone. But Lu has their young daughter to look after and a car that overheats too easily, so she tries to solve the mystery from her L.A. home base in "Border Radio." This is real DIY filmmaking from three UCLA film students: Allison Anders ("Gas, Food, Lodging"), Kurt Voss ("Sugar Town"), and Dean Lent, who took four years to complete the film. It's a patchy effort that begins in confusion before settling into a rambling anti-road trip which seems like a West Coast response to Jim Jarmusch's far better "Stranger Than Paradise." Yet despite its amateurishness, the film builds a kind of shaggy dog charm from its off beat humor and snapshot of the time's L.A. underground. The film's more about moments than any cohesive accomplishment. When Lu turns to family friend Chris (Chris Shearer, "The Whole Wide World") to babysit while she goes to look for Jeff, it's clear she picked the wrong guy - but did she really call him to babysit? Chris is soon ensconced in his buddy's bed with his buddy's wife, an amusing combination of slacker opportunist. A scenester (Iris Berry) who claims to be the first punk in L.A. talks about Jeff's band like a real insider, then later says she really doesn't know him. We see Dean (John Doe of L.A. punk band X) sitting in an abandoned drive-in reading the Daily Racing Form. A little while later the same guys who were after Jeff in the opening scene arrives on Dean's. In one of the film's more memorable bits, we watch Lu make her way through the cavernous Hong Kong Café, then park on the staircase out back with Dave (Dave Alvin of The Blasters ('Border Radio')), who begins to fill her in on just why Jeff took off. Meanwhile, we catch occasional glimpses of Jeff in Mexico, just where Lu thought he'd be, drinking beers and playing his guitar alone and with the locals. The film's black and white photography (by Dean Lent, who went on to shoot Ander's next film and stayed in the field) is its best element. Convincing costume and makeup look like the cast's own. The film itself is a bit of a ride to nowhere, the answer to its central mystery of no consequence. The actors, who improvised much of the film, are often obviously inexperienced, yet some, like Shearer, achieve character and others, like Anders, are photogenic.

This is a 1987 experimental student film from then-newcomers Alison Anders, Dean Lent and Kurt Voss set in the burgeoning LA punk scene of the 80s. Its semi-improvisational style utilizes the talent of punk icons Chris Desjardin, leader of The Flesh Eaters, John Doe of X fame, and other members of the LA scene (Dave Alvin of the Blasters and Texacala Jones of Tex and the Horseheads). For a no-budget student flick, the makers of “Border Radio” assemble an interesting group of non-actors and put together a mystery that has Jeff wandering aimlessly, with the pilfered loot, across the Mexican landscape. Meanwhile, Dean and Chris are frantic and need the money to fend off angry and unscrupulous promoters. Aiding them in their search for the elusive Jeff are Lu (Luanna Anders) and Dave (Alvin), Jeff’s friend and on-stage musical opponent, and their scenes together are fun to watch, especially Dave Alvin as he makes his guitar sing. “Border Radio,” though nearly 25-years old, is surprisingly fresh, still. The music, by notable LA punkers of the time, is done with talent and energy and lends to the hip quotient of the film. The three fledgling directors, with their many on-camera musician colleagues, are an ensemble team that makes an honest, still-interesting drama that infuses music and dark humor into the mix.