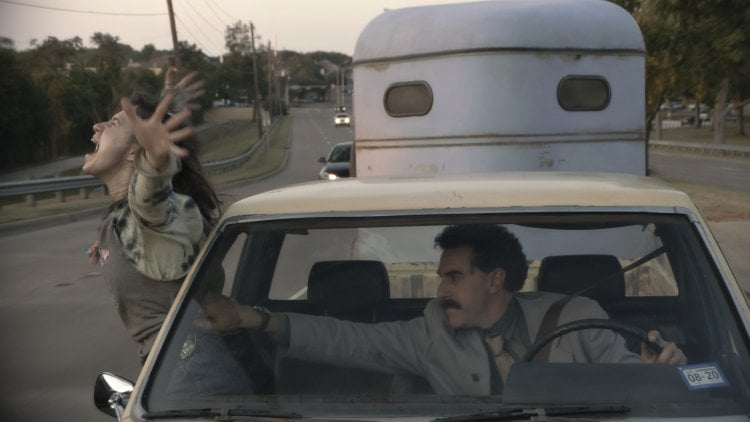 While the movie following his American exploits became a huge hit stateside, it was considered an embarrassment for his home country of Kazakhstan and so Borat Sagdiyev (Sacha Baron Cohen) has spent the intervening years doing hard labor in a Gulag.  He is released when his premier decides he wants to buddy up to Trump and Borat agrees to a ‘Delivery of Prodigious Bribe to American Regime for Make Benefit Once Glorious Nation of Kazakhstan’ in “Borat Subsequent Moviefilm.”

Prepare to be impressed – and to laugh a lot.  Not only did Sacha Baron Cohen (along with his “Borat” writer Peter Baynham and Jena Friedman) have to figure out an angle for a sequel where his prior persona would be readily identifiable to most, but he and his director Jason Woliner (TV's 'What We Do in the Shadows') stealth shot much of the film during a pandemic.  Fear not if you were let down by Baron Cohen’s uneven, interim Showtime series, as his return to the big screen as the Kazakh broadcaster is plenty inspired.

After agreeing to make a gift of Kazakhstan's Minister of Culture, Johnny the Monkey, to No. 1 Ladies Man Mikael Pence (pronounced by Borat as if the last two letters were reversed), Borat returns to his home to discover that his neighbor has taken over his life, including the allegiance of his three sons (still a better fate than what we learn befell his former producer Azamat Bagatov).  All he has left is his livestock, he moans, two pigs, a cow and his daughter.  Tutar (the comedically gifted Maria Bakalova) is a feral fifteen year old with straw in her hair and a unibrow dreaming of her own ‘golden marriage cage’ like her idol, ‘Queen Melania,’ and she begs her father to take her to the U.S. of A., but he refuses, taking off on a slow cargo ship while the monkey is shipped in style.

Upon finally arriving in Galveston, Borat is horrified to discover that Tutar not only stowed away in Johnny’s crate, but ate the monkey to survive the trip.  He’s also recognized wherever he goes.  Never one to shy away from a challenge, Borat quickly purchases a fat suit to disguise himself as an American and calms his furious premier by suggesting his daughter be substituted for the monkey.  Then it’s off to the feed store to purchase a cage commensurate with Tutar’s anticipated status.

While there can be a feeling of déjà vu in a couple of scenes, they are given new twists here, Borat’s southern dinner party now a debutante’s ball where Tutar is presented as Sandra Jessica Parker Sagdiyev and performs a native dance with her dad that must be seen to be believed.  He also leads a sing-a-long at a right wing rally where his chorus of ‘we’ll inject him with the Wuhan flu, we’ll chop him up like the Saudis do’ is as enthusiastically joined as his prior ‘Throw the Jew down the well.’  He attends the latter with two conspiracy nuts that Baron Cohen actually had to remain in character with for five full days during a COVID lockdown (and they never seem to find him all that strange…).

Baron Cohen did drop his usual subterfuge before interacting with Holocaust survivor Judith Dim Evans disguised as a ‘Jew’ in a way that makes Nazi propaganda look tame (Pinocchio sized nose, bat wings, etc.) and Luenell reappears as well.  But while Mikael Pence is never reached, plenty of CPAC attendees barely glance at Cohen beneath his full KKK regalia and Rudy Giuliani, who thought he’d escaped being made a mockery of, is now being investigated for his (really disgusting) behavior with Bakalova who he apparently bought as a real Kazakh journalist hook, line and sinker.

Borat has so little idea of how to deal with a daughter that he brings along a Kazakh manual (hilariously misogynistic and Medieval).  Yet their American adventure, which includes a makeover for Tutar (where is the ‘No means Yes section?’), a side-splitting trip to a pregnancy center, an appointment with a plastic surgeon and a run-in with the Hillsborough Republican Women’s Club, is enlightening for them both.  Borat learns his premier used him for a very nefarious plot, but their return to Kazakhstan is sweetly triumphant.

Borat Sagdiyev (Sacha Baron Cohen) has spent the last 14 years at hard labor in a Kazakhstan prison after his disruptive visit to America. But, now, his government needs the wild and crazy journalist one more time to deliver a very special gift to the President of the United States in “Borat Subsequent Moviefilm.”

The original title for Sacha Baron Cohen’s latest gag-fest was “Borat Subsequent Moviefilm: Deliver of Prodigious Bribe to American Regime for Make Benefit Once Glorious Nation of Kazakhstan” or “Borat 2.”

Well, the “prodigious bribe” happens to be Johnny the Monkey, a chimpanzee that is the Kazakh Minister of Culture. But, the plan goes off the rails when, instead of Johnny in the shipping crate, Borat’s daughter Tutar (Maria Bakalova) smuggled her way in. (We will leave Johnny’s fate a secret.) This is when the Borat we know and love kicks in and we get more of the old stuff, but some very new and different gags, too.

You have probably heard all about Rudy Giuliani’s cameo appearance as himself and that is jaw dropping in a number of ways. But, there are many more wacky adventures, with some rehashing of old gags, which keep you very entertained all the way through. And, newcomer Maria Bakalova is a real find and a new comedic talent.

"Borat Subsequent Moviefilm" will be available on Amazon Prime on 10/23/2020.