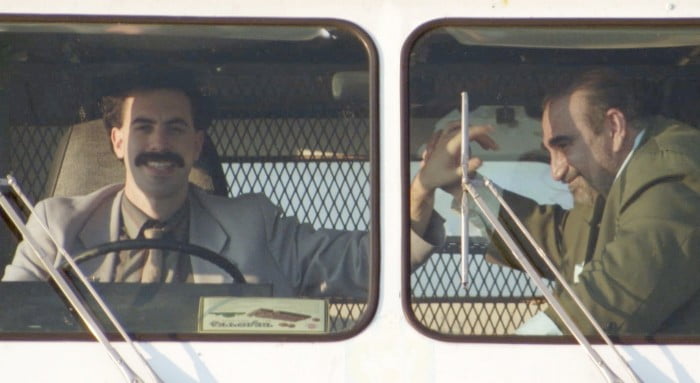 As the second most successful professional journalist in Kazakhstan, Borat Sagdiyev (Sacha Baron Cohen, "Da Ali G Show") is plucked from his hometown to travel to the New York City with his producer and technical crew Azamat Bagatov (Ken Davitian, "Holes," "LA Twister") to make a documentary for the enlightenment of his fellow Kazakhs. But when he gets there, Borat dupes Azamat into a cross country journey to fulfill his new goal - marrying Pamela Anderson - in "Borat: Cultural Learnings of America for Make Benefit Glorious Nation of Kazakhstan."

Sacha Baron Cohen became known world wide as Ali G, the clueless rapper who conducted outrageous interviews with British politicians who didn't realize they were being put on. Now, as the misogynistic, hugely anti-Semitic Borat, Cohen goes for America's heartland and what he delivers is both insanely funny and more than a bit terrifying. One can only hope that for every gun store owner who calmly responds to a request for the best type of weapon to kill a Jew hundreds of others were left on the cutting room floor.

This, of course, raises the question of ethics. Obviously the people on screen had to have signed a waiver, but equally obviously they believed they were to appear in some sort of documentary intended for a Kazakhstan audience. It will be interesting to see if any lawsuits result from this film. That said, Sacha Baron Cohen clearly has the biggest comedic cojones in the industry today and his movie is brilliant. You'll be picking your jaw up off of the floor right through to the film's climax. And that's several scenes *after* the nude male wrestling scene that begins in a hotel room and ends in a ballroom real estate convention.

There's no point in running through Borat's many adventures - they simply must be seen to be believed - but almost all of them are both funny and revelatory. Thankfully, some folks begin to get uncomfortable with Borat's schtick, like the rodeo audience who start to shuffle uncomfortably when he tries to create a blood lust for Iraqi citizens ('May George Bush drink the blood of every man, woman and child in Iraq'). But his experience at a Pentacostal meeting, while not on the creepy level of "Jesus Camp's" Evangelicals, will still be unsettling for many outsiders.

Cohen, with his long, lanky body and black curly mop top and mustache, engages with his sheer interest in people and joy of living, even when he's saying the most outrageous things. Borat simply recognizes no social boundaries and Cohen makes us laugh at the ludicrousness of things like racial hatred by taking them way over the top. If the President of Kazakhstan could take a joke ("Borat" has been banned in that country and an earnest campaign touting the country's riches inadvertently backfired when they boasted the world's largest wolf population) he could have used this as a tourism hook. Pamela Anderson seems to have gotten it.