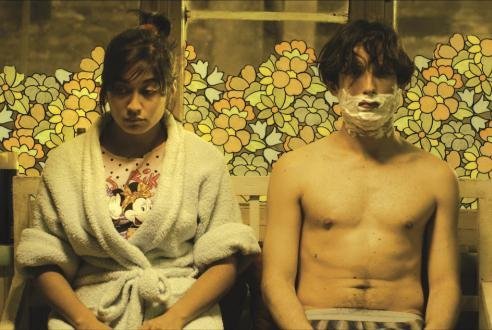 Before beginning this chaptered film about books, a narrated foreward tells us the ending - Julio (Diego Noguera) will live, Emilia (Nathalia Galgani) will die and everything in between is fiction. As we go back and forth in 8 year segments, Julio's current girlfriend Blanca (Trinidad Gonzalez) inspires him by filling in a plotline blank with "Bonsái."

For his sophomore film, writer/director Cristián Jiménez ("Optical Illusions") adapts poet Alejandro Zambra's novella about a young man writing a novel as a cover for a lost job with a respected novelist which overlaps into and draws from his past and current love lives. The concept is a clever literary conceit and Jiménez is adept at juggling fractured timelines, but he fails to make us care about the puppets at the end of his strings, a puzzling issue for a filmmaker bold enough to announce at the onset that one of his leads will die. The film is broken into six chapters. 'Proust' lays the groundwork when a young Julio discovers he's the only one in his class who hasn't read the author. He comically sets into the seven volume work at the beach, but all he manages is a book-shaped sunburn. He lies to his classmate Emilia, who claims to have read the entire work years earlier during a boring vacation. 'Blood' gives us the adult Julio, intent on getting a job typing respected author Gazmuri's (Hugo Medina) pages, but he overbids for the job. Rather than telling Blanca, he begins handwriting his own version of Gazmuri's work in notebooks which he ages and gives to Blanca to critique. The film bounces back and forth in time and we see Gazmuri's summation of his novel - a man hears on the radio that his first love has died - begin to take hold in Julio's own life. This is a film about the written word which keeps folding back in on itself, from Proust's work to Gazmuri's to Julio's, and Jiménez conjures cute parallels among his stories - Julio's carefully tended bonsai, itself a metaphor, reemerging as the delicate plant at the heart of another book, Macedonio Fernandez’s story 'Tantalia,' about a couple who realize their love will die if they fail to keep their clover alive. While there is nothing of the supernatural in "Bonsái," the film still falls within the great tradition of Latin American magical realism. Jiménez works with a largely inexperienced cast and their matter of fact way of processing experiences keeps us at arms length - for a story about passions there is little in evidence. There is also the odd character of Barbara (Gabriela Arancibia), Emilia's roommate who puts up with all sorts of nonsense from the couple for no discernible reason excepting mirthless comic relief. Maybe it's a cultural thing. "Bonsái" is intriguing because of its Escheresque style of storytelling, but its intellectual appeal fails to reach the heart. ("Bonsái" made its debut as an Un Certain Regard selection at the 2011 Cannes film festival.)