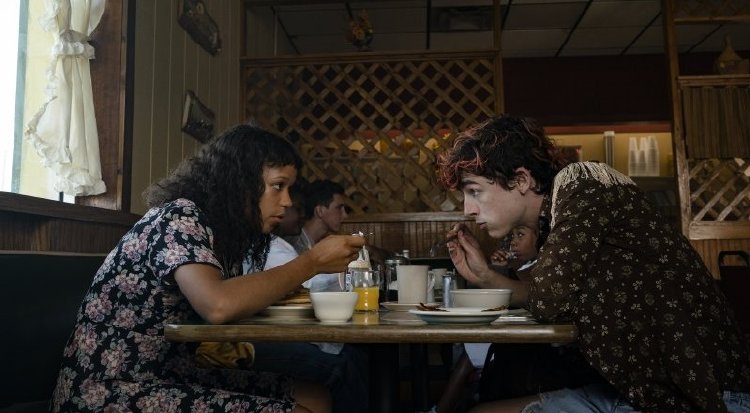 When a pretty and popular high schooler (Kendle Coffey) suggests new student Maren (Taylor Russell, "Waves") sneak out from under her strict father’s watch to come to her sleepover, Maren is thrilled.  But once there we become uneasy by the way Maren seems to sniff the young woman who’s taken an interest in her.  Our fears are realized when Maren strips the flesh from her finger, then bolts amidst hysterical screaming.  Her father (André Holland), weary from the continual need to move, abandons her, leaving behind a cassette tape narrating her history of “Bones and All.”

Director Luca Guadagnino’s ("Call Me By Your Name") latest project with his “A Bigger Splash” and “Suspiria” writer David Kajganich adaptation of Camille DeAngelis' novel became instantly ironic in light of his “Call Me By Your Name” star Armie Hammer’s sexual abuse scandal revealing cannibalistic fantasies.  But while the cannibalism aspect is central to his film and, at times, pretty gory, it is more symbolic of the type of uncontrollable afflictions which push folks to the fringes of society than utilized for its sheer horror element.  At heart, “Bones and All” is an affecting love story between two cursed individuals looking for a way to live with themselves and each other.  After her breakout performance in “Waves,” Taylor Russell confirms her talent here, a true star-in-the-making.

Maren begins her extensive road trip by heading to the town noted on her birth certificate in an attempt to find her mother, but the first person she inadvertently finds is Sully (Mark Rylance), an ‘eater’ like herself who’s sniffed out her presence and attempts to take her under his wing.  An invite to dinner finds Marin in a gracious old Victorian, Sully cooking Cornish hens, but further investigation reveals an old woman lying dying on a second floor bedroom.  Maren’s instinct is to call for help, but Sully dissuades her and indeed, the next morning both partake of a meal.  But Maren is clearly uncomfortable and the look on Sully’s face as she passes by on an outbound bus is one of dashed hopes.

She’ll meet someone closer to her sensibilities while shoplifting in a small market.  A drunk (Sean Bridgers, TV's 'Get Shorty') harassing a woman with a baby in a stroller is approached by Lee (Timothée Chalamet), who makes quick work of him (and later, a meal).  Lee, a thin young man with dreamy eyes and red tipped curls, isn’t very receptive when Maren approaches him in the pickup truck he’s acquired, but they fall into an easy companionability and hit the road.

Their journey will find them running into another of their type, Jake (Chalamet's "Call Me by Your Name" dad, Michael Stuhlbarg) all the more unsettling because of the ‘normie’ Brad ("Halloween Ends" director David Gordon Green) who is his knowing accomplice, and a carnie (Jake Horowitz, "The Vast of Night") Lee seduces whose real identify as a husband and father causes a temporary moral rift between the two.  But it is the revelation of their own backgrounds, Lee the older brother of loving sister Kayla (Anna Cobb, "We're All Going to the World's Fair"), and Maren’s horrific discovery of her birth mother Janelle (Chloë Sevigny), that propels them into a ‘normal’ life (‘I love you.  Let’s be people’).  For a while, things are blissful, but the past proves hard to escape…

Guadagnino’s central love story is every bit as affecting as his last with Chalamet, his two young actors searching and vulnerable.  In the film’s climax, an act of self sacrifice ties cannibalism to the Catholic Church’s sacrament of communion, an act of true love, not blasphemy.  Cinematographer Arseni Khachaturan ("Aviva") enlivens visuals, Maren presented as a strong character with a low angle shot, then literally under a microscope, shot beneath a glass coffee table from above.  Marco Costa's editing walks a fine line between revealing and not. “Neon Demon” production designer Elliott Hostetter paints the vastness of middle America, from poor transient housing to middle class ranches, camp grounds to state mental institutions.  Trent Reznor and Atticus Ross’s lovely score dispenses with electronica for more orchestral lyricism and acoustic guitar, occasionally foreshadowing more horrific moments.  Their original song, ‘(You Make Me Feel Like) Home,’ segues into a romantic reprise.

Chalamet and Russell find a soulful balance together, one of the great romantic pairings of the year, but Mark Rylance’s eerie, lisping loneliness, at once pitiful and threatening, makes an equally strong impression with far less screen time.  Stuhlbarg is almost unrecognizable as a kind of hillbilly cannibal, bare-chested underneath overalls.  Jessica Harper, of the original 1977 “Suspiria,” also stars as Maren’s adoptive grandmother.

With “Bones and All,” Luca Guadagnino mixes multiple genres into one of the most intriguing films of the year.