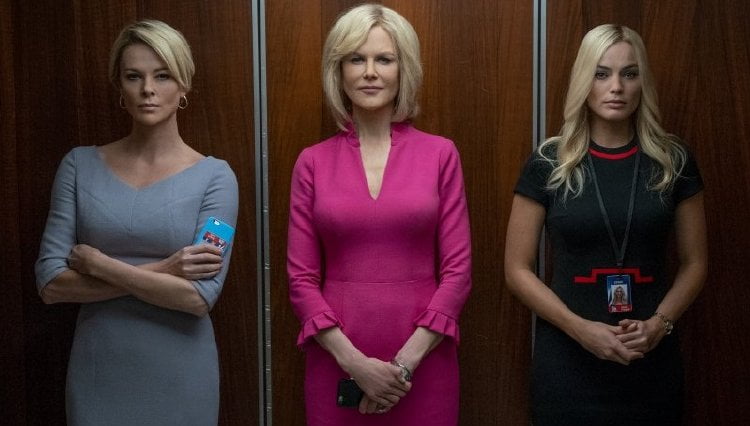 On July 6, 2016, former Fox Television news anchor Gretchen Carlson (Nicole Kidman) filed a lawsuit against the company’s CEO and chairman Roger Ailes (John Lithgow) for sexual harassment. The result of that suit led to a scathing scandal with a score of other women coming forward to add their names to the list of Ailes’s victims in “Bombshell.”

More effective than the more lurid Showtime series, with Lithgow a more convincing Ailes than Russell Crowe, "Bombshell" is a stomach churning experience. Theron's transformation into Megyn Kelly is even more impressive than her 'uglification' to play Aileen Wuornos in "Monster" - close your eyes and you'll think you're listening to Kelly's deeper register. But while it is producer Theron who is getting most of the attention for the film, it is important to note that it was Gretchen Carlson who was the first to go up against the powerful Ailes, Kelly only adding her voice much, much later on. In fact, the film leaves us wondering just what happened between Ailes and Kelly, the latter having grown powerful enough herself to erect walls around her image. The large ensemble keeps unspooling one character actor after another (Brooke Smith, Alice Eve, Richard Kind, Stephen Root, Taylor Holland, Allison Janney, Connie Britton, Robin Weigert), with lesser known names portraying the braying Jeanine Pirro and future Trump Jr. gf Kimberly Guilfoyle, both, of course, solidly team Ailes. Thankfully, the film doesn't overlook Kelly's Fox brand, noting her 'Santa is white' stance and portraying her husband (Mark Duplass) admonishing her for letting Trump off too lightly during their post 'blood from her whatever' sitdown.

Recently, Showtime ran the mini-series, “The Loudest Voice,” with Russell Crowe as Roger Ailes, and, in part, captured the cause and the details of the scandal that eventually brought him down. “Bombshell” tells much the same story but with the perspectives of the women Ailes harassed and sexually abused – Gretchen Carlson, Megan Kelly (Charlize Theron) and Kayla Pospisil (Margot Robbie, as a composite of the many other women wronged by Ailes and who eventually joined the lawsuit).

Of the three femme leads, Charlize Theron stands out as Megan Kelly. While Nicole Kidman’s Carlson is given more screen time, Theron dominates her character whenever she appears. Margot Robbie is the most sympathetic of the three and her humiliating abuse by Ailes is nauseatingly effective in its brevity and its devastating effect on the young woman.

The supporting cast is an embarrassment of riches with, besides the talented leads, many veteran thesps filling in, quite well, the many familiar characters that populate “Bombshell.” The list is too long to name them all, but some are notable, like Kate McKinnon as Jess Carr, a gay, femme democrat working at Fox news, and Malcolm McDowell as Rupert Murdoch, just to mention two.

I was quite familiar with Roger Ailes reputation, politically at least, and my only regret is that he did not live to get his just desserts. But, then again, with the latest news about Harvey Weinstein, Ailes may have gotten away with it all.