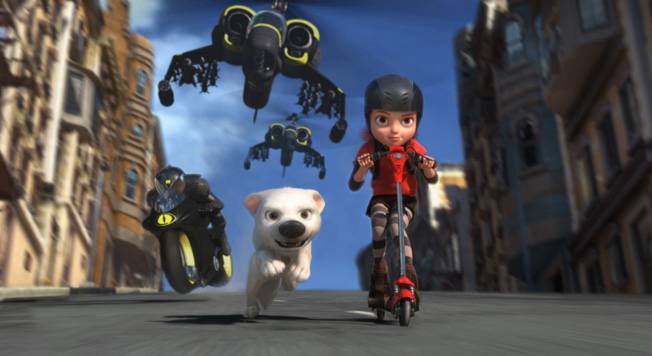 A little girl visits the local animal shelter and falls in love with one little guy, an all white pup that captures Penny’s (heart with his first “hello!” Jumping ahead five years we learn that the evil Green-Eyed Man, Dr. Calico (Malcolm McDowell), kidnapped Penny’s scientist dad (Sean Donnellan) and it is up to her to save the day with the help of her faithful dog, named “Bolt.”

When a network exec (Kari Wahlgren) informs her television director (voice of the Actors Studio's James Lipton) that his show's formula is getting stale, he decides to introduce a cliff hanger that will leave young star Penny (voice of Miley Cyrus) kidnapped by the green-eyed man (voice of Malcolm McDowell) and the superdog who usually saves her left behind. Penny is horrified that her costar, who believes their show is reality, will suffer overnight and she's right to worry, as in his frenzied state he escapes and is accidentally shipped to New York where no one recognizes him as the star of "Bolt." Walt Disney's "Bolt" represents two firsts - it is the first film conceived and produced under Pixar's John Lasseter and it is their first computer generated animation to be designed in-house in 3-D. It's not up in the rarified heights of most Pixar animations, but "Bolt" is a charmer with some strong messages about pet responsibility and, ironically, child stars (Bolt has difficulty with the real world after being coddled and deluded as an entertainer). "Bolt" is also the directorial debut of Disney animation department vets Byron Howard and Chris Williams ("Mulan"), who cowrote the screenplay with Dan Fogelman ("Cars"), another Disney/Pixar marriage. The film opens with Penny choosing her puppy from the Silverlake animal rescue center, then jumps five years to an incredible present - Penny and Bolt are trying to save her dad (voice of Sean Donnellan) from the evil Dr. Calico (McDowall). Bolt barrels through walls, cuts through metal with his laser vision, zips along at hyper-speed pulling Penny on her motorized skateboard while being chased by goons clad in black from head to toe on motorcycles and in stealth copters. When they're met by a veritable army, Bolt employs his Superbark, a sonic wave that cuts down everything in its path. Then Bolt's whisked away to a trailer to preserve his illusion. Bolt's in his own version of "The Truman Show" and we've just been punk'd. When Bolt finds himself on the streets of New York he meets Vinnie (voice of Lino DiSalvo), Joey (voice of Todd Cummings) and Bobby (voice of Tim Mertens), three wise guy pigeons who send him to Mittens (voice of Susie Essman, HBO's "Curb Your Enthusiasm"), a street-wise cat Bolt believes is Calico's. Mittens susses out the situation and to get rid of him, use a Waffle House place mat to show Bolt the route he must take to get back to Hollywood and Penny. But Bolt takes Mittens as a hostage and she finds herself the unwitting travel companion to a dog who believes he has super powers. Along the way, Bolt finally realizes the truth and Mittens teaches him how to beg (a hilariously self-aware montage by animators showing their button pushing tricks manipulating facial expressions) at an RV park, where they ring the doorbell of a huge fan, Rhino (voice of Mark Walton, "Chicken Little's" Goosey Loosey), a hamster in a ball who immediately joins the adventure. Back home Penny's Agent (voice of Greg Germann, TV's "Ally McBeal") and the network persuade her to stop searching for Bolt and go on with a new dog, but her heart is breaking. "Bolt's" basic story is nothing too original, but its underpinnings and flourishes are smart and inventive. Like a child actor, Bolt's never been 'a regular dog,' and despite his misgivings about not having super powers, Mittens assures him being a regular dog is one of the best things in the world. The writers have them jump a tractor hauling a prefab, the ideal setting for Mittens to teach Bolt about drinking from the toilet and hanging his head out the window of a moving vehicle. Mittens herself is a terrific creation - an emaciated 'street' cat who shakes down the pigeons for protection and who turns out to have a tragic past, revealed after the film's most heartbreaking image - Mittens staring into the back corner of an animal shelter cage (the heroic breakout engineered by Bolt and Rhino is one of the film's highlights, an amusing parody of an action film). Rhino is a 'ball' of energy and the animators have done a great job depicting his bowling motions while modeling the hamster to resemble his enclosure. When he hyperventilates, he's lost in a fog of his own condensation. Background animation is also noteworthy, New York connected to Hollywood by a rural Americana of picket fences and farms. The lowering cloud of dense, billowing smoke in a Hollywood soundstage is really threatening in the film's climatic scene. 3D is used not as an end to itself but as embellishment to the total experience. Oddly, one of the film's most visually interesting bits is a 2D representation of Mittens's map, the travelers represented as cutouts. Vocal talent is well matched to the characters. Travolta makes Bolt earnest with the slightly goofy edge of puppyhood. Essman is terrific giving Mittens a bruised soul beneath the bravado. Germann's unctuous agent uses a verbal pin to puncture conversations he claims to be putting on simmer. The pigeons, both the East Coast New Yawkers and West Coast wannabes, are hilarious trios of grace notes (Tim, the Hollywood pigeon who pitches Bolt an alien angle, tells his jubilant partner 'Don't get hysterical - that's what lost you Nemo.'). "Bolt" does have some down time and, considering the presence of Cyrus, the movie's songs are boring dross (“I Thought I Lost You” is performed by Travolta and Cyrus), but this insider update of "The Incredible Journey" will entertain adults along with their kids even if it doesn't sending them out of the theater humming. It's not as inventive as Pixar's "WALL*E," but it is more consistent. Kudos to Disney for stressing shelter adoption and pet responsibility first with "Beverly Hills Chihuahua" and now this.