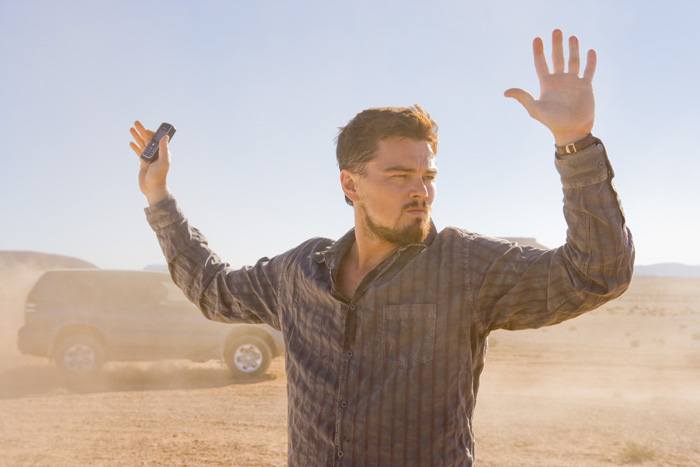 Roger Ferris (Leonardo DiCaprio, "Blood Diamond," "The Departed") is on the ground in the Middle East searching for Al Qaeda leader Al-Saleem (Alon Aboutboul, "Beaufort") when he makes a pact with Jordan's Security Chief Hani (Mark Strong, "Oliver Twist," "Miss Pettigrew Lives for a Day") to work together and share information. But Ferris's boss back in D.C. thinks Hani cannot be trusted and that he can keep one step ahead of him and Roger finds himself trapped inside a "Body of Lies."

Director Ridley Scott has given us such classics as "Alien," "Blade Runner" and "Thelma & Louise," but his filmography is also dotted with lesser films like "Someone to Watch Over Me," "G.I. Jane" and last year's "American Gangster." "Body of Lies," adapted by screenwriter du jour William Monahan ("Kingdom of Heaven," "The Departed") from the David Ignatius novel should seem ripped from today's headlines. Instead it plays like a typical cat and mouse spy movie with top notch production values and a tacked on romantic angle. Even the climax, redolent as it is of the Daniel Pearl beheading, loses its punch after an initial jolt. When Ferris meets a suicide bomber unhappy with his assignment, he wants to bring the man in, but Ed Hoffman (Russell Crowe, "Gladiator," "American Gangster") has none of his subordinate's compassion, a point driven home when Ed won't even acknowledge the loss of Roger's right-hand-man with a monetary gift to his family. Roger, having almost gotten killed himself, is angry, but nonetheless accepts Ed's directive to leave Iraq for Amman to meet Hani. Hani recognizes Ferris as a smart and dedicated man, but tells him they will only succeed together if Roger never lies to him. Hani identifies Mustafa Karami (Kais Nashif, "Paradise Now") to Roger as his Al Qaeda insider after Ferris tells him the location of a safe house. But that safe house is compromised when Roger's Amman man tries to pick up Karami. Hani is furious, but so is Ferris - Ed's tried to overstep him once again. On a trip to D.C. Roger lays out an idea to Hoffman - set up a false Al Qaeda unit more powerful than Al Saleem's and they are sure to draw the man out. Ed OKs the plan and Roger engages Garland (Simon McBurney, "The Golden Compass," "The Duchess"), an eccentric computer wiz, to help him pull it off. Architect Omar Sadiki (Ali Suliman, "Paradise Now," "The Kingdom") is chosen to be their false and unsuspecting front. And with that move, the character of Ferris, having been shown to have morals, is comprised by putting an innocent in danger. It's not believable, nor is the romance with Iranian nurse Aisha (the stunning Golshifteh Farahani, "Half Moon") whom he meets in a clinic and is seriously courting in short order. DiCaprio is fine as Ferris, all furrowed brow integrity, but the role doesn't give him much room to breath, one comic respite colluding with Aisha's nephews some of the only relief from plotting and explosions. Crowe, who's become a Ridley regular since winning his "Gladiator" Oscar, is potentially more interesting, a high level C.I.A. string puller who moves his chess pieces via his ever present Bluetooth while dropping the kids off at school or photographing their soccer games. He's a wolf in sheep's clothing (Crowe is costumed in baggy cardigans covering the weight he gained for this role), but we never are given any sense of the man's motivations. It is notable that the most interesting character is not one of these two mega-stars, but Mark Strong, whose Hani is a tough negotiator and smooth operator who understands the stakes of the game. The film features the de riguer technology of the day in the form of satellite 'eyes' that can be seen when they glint in the sun as the images they shoot from above are beamed back to headquarters. They're like the spying eyes of Ridley's brother Tony's "Enemy of the State" without his frenetic editing pace. Ridley has editor Pietro Scalia ("American Gangster") slow things down so that, for example, we watch a Japanese tourist couple long enough to be horrified when our last sight of her is through her husband's viewfinder just as a terrorist's bomb goes off. Original music by Marc Streitenfeld ("Kingdom of Heaven," "A Good Year") is typical of this type of film, an attempt to pick up one's pulse rate backed by Middle Eastern noodling for location flavor. "Body of Lies" comes with high pedigrees, but the end result is just pedestrian.