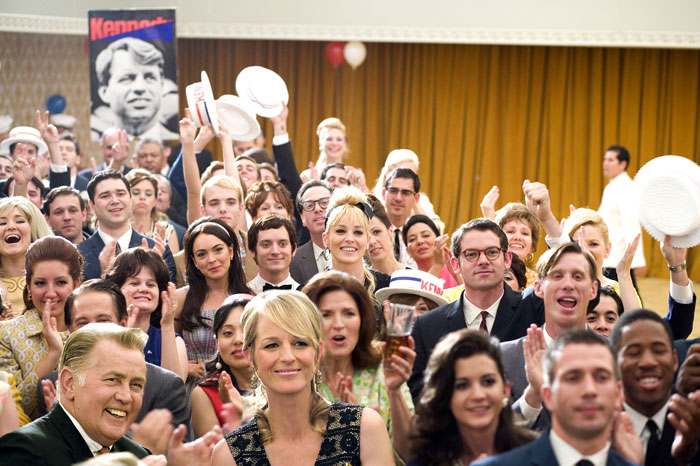 On March 16th, 1968, a man many Americans believed could end the Vietnam War, racial and economic injustice and unite a divided country declared his candidacy for the Presidency of the United States. Less than three months later, on the verge of winning the Democratic primary, he was assassinated at the Ambassador Hotel in Los Angeles. His name was "Bobby."

Writer/director Emilio Estevez ("Wisdom," "Men at Work") reaches for a location centric tapestry capturing a defining moment of American history and turns in something a little better than past efforts but not quite good enough. Every moment original Robert Kennedy footage is on screen is a potent reminder of what our country lost on June 6th, 1968, but while Estevez succeeds in catching some individually touching scenes, others are overwritten, phoney and irrelevant. The film begins with a literal false alarm, the Ambassador's staff and guests reacting to the threat of fire at an early hour. They disperse with relieved laughter and we follow José (Freddy Rodríguez, replaying his caring Latino busboy from "Poseidon"), a Mexican upset that once again he's not being asked, but informed, that he will work a double shift. His racist boss, Timmons (Christian Slater, "Alone in the Dark"), doesn't care that José has tickets to take his dad to see the Dodgers that night, the night Don Drysdale is expected to break a league record by pitching his sixth straight shut-out game. After Black sous chef Edward Robinson (Laurence Fishburne, "The Matrix") informs José and his friend Miguel (Jacob Vargas, "Jarhead") that 'the white people will come around,' 'that they need to feel like the great emancipator' and that his attitude ensures he works no double shifts, a thoughtful José offers Robinson his tickets. Robinson tells him he a 'once and future king.' While some of Fishburne's dialogue is very heavy handed the actor almost succeeds in making it seem natural and the racial hierarchy in the Ambassador's kitchen is "Bobby's" most successful storyline, especially in how Estevez dovetails Drysdale's achievement with José's fate (and spiritual link to Bobby). There are also some moments of sweet hopefulness in the tale of a teenage girl, Diane (Lindsay Lohan, "A Prairie Home Companion"), who has come to marry schoolmate William (Elijah Wood, "The Lord of the Rings") to keep him out of Vietnam, but Estevez blunts the impact by tinging Lohan's character with a martyr complex. The hotel's manager (William H. Macy, "Edmond," "Thank You for Smoking") is a Bobby follower who forces Timmons to give his staff time off to vote before firing him, but the beloved boss is also cheating on his wife Miriam (Sharon Stone, "Basic Instinct 2"), the hotel's hair stylist, with a switchboard operator (Heather Graham, "The Guru") - Estevez's awkward attempt at a Kennedy stand-in, perhaps? As Miriam Stone is quite good, a trophy wife beginning to acquire the hardened look of an old showgirl trying to hang onto her looks. Estevez has cast himself in the role of the put upon husband of alcoholic singer Virginia Fallon (Demi Moore), indicative of the entertainment of the age while Moore's real life husband Ashton Kutcher makes for a very unconvincing drug-deal hippie who turns on two Kennedy campaign volunteers, Jimmy (Brian Geraghty, "Art School Confidential," "When a Stranger Calls") and Cooper (Shia LaBeouf, "A Guide to Recognizing Your Saints," who does a funny little litter box routine in an otherwise forgettable subplot). Also working the campaign is a newly matured Joshua Jackson (TV's "Dawson's Creek") and his Black protege Dwayne (Nick Cannon, "Drumline," "Roll Bounce"), who tie the plot to past (the assassination of Martin Luther King, Jr.) and future (the introduction of electronic voting machines and interference with Black American voting). The film's most irrelevant subplot belongs to the director's dad. Martin Sheen is an older wealthy, but depressed man married to the younger, insecure Samantha (Helen Hunt) and I had no idea what they were doing at the hotel until the press notes informed me they were on a second honeymoon. And as the Statler and Waldorf of the Ambassador are Harry Belafonte as Nelson and his chess partner, retired doorman John (Anthony Hopkins, going full circle from his Oscar nominated role as Nixon to playing the man who would greet his rival). Estevez wraps his film with Kennedy's climatic speech (we only see Bobby in old footage or as a facially concealed figure) where all his characters gather together. Estevez gets the chaos and domino dissemination of the horrific news passing among the celebrants, but he also implies an irony by the death of one of his characters which his closing title card immediately negates. "Bobby" was probably viewed as a dream project by liberal Hollywood and Estevez's intentions are surely pure, but the director lacks the inspiring vision of his subject and his film plays like a made-for-television event despite its fine cast and meticulous production.