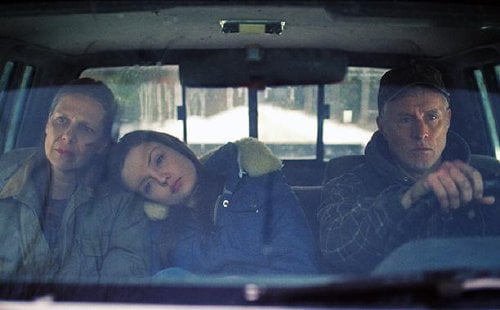 In the frozen isolation of a small logging town in northern Maine, Lesley (Amy Morton), the longtime driver of the town’s school bus, makes a terrible mistake. When she finished her route, she neglected to check the bus and, the next day, finds a young boy suffering from hypothermia and near death in the back of the bus. This one mistake will shatter the balance of the town in “Bluebird.”

In the Katahdin Region of Maine, logger Richard (John Slattery, AMC's 'Mad Men') worries about the declining paper mill industry. His wife, Lesley (Amy Morton, "Up in the Air"), drives the local school bus, but as she's checking it at the end of her line, she's distracted by a "Bluebird." Fledgling writer/director Lance Edmands pays homage to a disappearing way of life in a blue collar Maine town, but although he's gotten some terrific performances from his cast, cliched writing bogs down the film. Still, this little indie is worth a look for Amy Morton's fine work and its regional production design, photographed by cinematographer Jody Lee Lipes ("Ballet 422") like a mournful ballad. The central drama surrounds a little boy, left alone overnight in the cold on Lesley's bus. Who is responsible? The driver who failed to notice him or the mother, Marla (Louisa Krause, "Martha Marcy May Marlene"), who failed to pick him up? The latter seizes upon Lesley's slip as an opportunity, angering her mother Crystal (Margo Martindale, "August: Osage County") who keeps vigil with the boy. There's little in the way of happiness in this film (ironic given its title). Lesley and Richard's daughter Paula (Emily Meade, "That Awkward Moment") sings 'The End of the World' at karaoke. But when her boyfriend Walter (Adam Driver, HBO's 'Girls') apologizes for his grandpa's CDs, one wishes the filmmaker were more confident of his niche soundtrack than to have one of his characters make excuses for it. The drama associated with the slightest movement of the young boy's hand sums up Edmands' approach - quiet as a sigh. There's little in the way of last act revelations, just people worn down by life in a dying town. Grade:

While watching “Bluebird,” I kept comparing it to Atom Egoyen’s similar 1997 drama, “The Sweet Hereafter.” Both involve a small town tragedy that takes place aboard a school bus (though Egoyan’s creates a tragedy on an epic level for a remote Canadian town). Amy Morton’s Lesley is the key character in the film and the catalyst that will change the town and its inhabitants profoundly. A moment of distraction, a small bird flying onto the bus, makes Lesley and her family pariahs to the townsfolk. Morton gives a solid performance and is the strongest element of “Bluebird.” The rest of the cast, including John Slattery as Lesley’s husband Richard, are not given enough depth of character to be more than two dimensional. This may be due to the lack of experience of film editor turned writer/director Lance Edmunds. With more experience, both as writer and helmer, he may show true storytelling potential. As it is, “Bluebird” makes for a fair calling card.