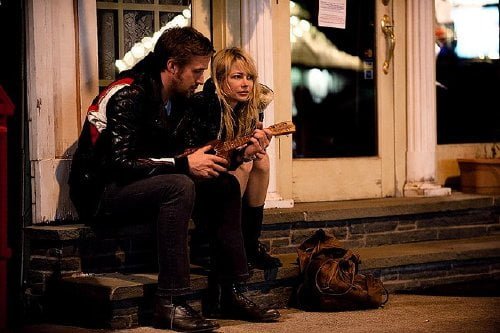 One morning in Scranton, Pennsylvania, 5 year-old Frankie (Faith Wladyka) finds her dad (Ryan Gosling, "All Good Things") asleep in a living room chair. She wakes him up, he plays and makes her breakfast, chain smoking all the while. Frankie's mom, Cindy (Michelle Williams, "Brokeback Mountain," "Wendy and Lucy") is harried getting ready for work. She's a nurse, he paints houses and six years earlier they were everything to each other in "Blue Valentine."

Cowriter (with Joey Curtis and Cami Delavigne)/director Derek Cianfrance took twelve years and a very unusual approach to making this emotionally naked and intimate portrait of a marriage and his efforts have paid off with unflinchingly honest performances from his two leads. But as he flashes back and forth between its last day (ironically the marriage ends on Independence Day) and the early days, one is left with the clear sense that this relationship was doomed from the start. Dean is the type of guy who Cindy's parents would be wary of and rightfully so. Still, it's an interesting exercise and although their is no surprise in where things are headed, there are some very charged and surprising moments along the way. Cianfrance has credited with his leads as partial cowriters due to lots of improvization. Gosling, Williams and Wladyka even lived with their director in the Scranton house for a month before shooting began in order to bond like a family and live the working class lifestyle. In many scenes, the two actors were given direction separate from the other to create a kind of tension. In that very first opening scene, for example, we can feel a marriage that's not only lived in but unraveling, the wife clearly wearing the pants and not exactly liking it, the husband a romantic dreamer who accuses women of being too practical, looking for 'the best option.' There's a great balance as the film flips back and forth in time. Years earlier, Dean has more hair and has just relocated from Florida to Brooklyn, where he lands a job with a moving company despite an unimpressive interview. He gets along with everyone and his personal attention to Walter, an elderly man being moved into a nursing home, is touching. Later Cianfrance will double back to that scene and surprise us by picking up one cut later, where Dean first lays eyes on Cindy, who is very close to and spends a lot of time with her Gramma (Jen Jones) across the hall from Walter's new room. Dean's been hit by the thunderbolt and works to get Cindy's attention. Their first 'date' ends with a transcendent song and dance duo in a storefront doorway. Things get dicey with Cindy's current boyfriend, Bobby (Mike Vogel, "The Sisterhood of the Traveling Pants," "Cloverfield"), who we've seen in an earlier flashback as a match not made in heaven. Dean endures being beaten up by him at work and meets Cindy's parents (John Doman and Maryann Plunkett) with a shiner and a smile. This dinner scene provides the reasons while this relationship is doomed to fail (and it will be Bobby that sets of the current day's climax). A surprise pregnancy, though, allows Dean to sweep Cindy off her feet. Williams and Gosling are simply terrific reflecting their characters in two different time periods. Williams is sweet and unformed, albeit a bit wary when we first meet her. Her ambitions toward medical school appear sprung from her natural caring for her grandmother (washing her hair, etc.), a surprise revelation about her sexual history clearly sprung from living with a controlling and abusive father. In present scenes (the actress gained fifteen pounds in short order), Williams has lost patience, shouldering responsibility for a man who thinks it's OK to drink a beer before heading in to work in the morning. Gosling is much the same, but different, an indulgent dad whose resentment at his wife's lack of attention is simmering into a violent rage. Here's a man who thought his life's path was set with his marriage and a woman who saw it as a beginning to something bigger. The film's editing team of Jim Helton and Ron Patane have done a beautiful job of dancing between past and present with Cianfrance setting off little bombs of insight here and there. If only they'd been able to work that family dinner into the film later, so it wasn't so obvious what the cause of the breakup would be. The early scenes were shot handheld on 16mm, giving them vibrance where the latter scenes are static, shot in close ups on HD, giving them a claustrophobic flatness. "Blue Valentine" is a unique approach to independent filmmaking, an actor's workshop with true emotion, but in the end it's just too inevitable. Williams and Gosling are terrific, though, and Cianfrance is one to watch.