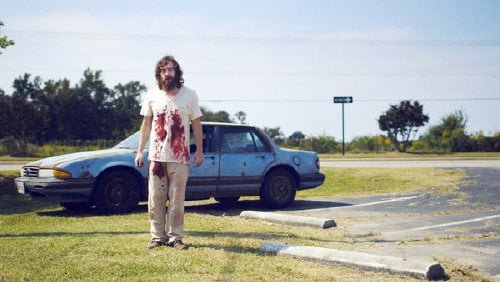 When we first see Dwight (Macon Blair), the bearded long hair is taking a bath, but the arrival of the home's occupants and his reaction clue us in that he's homeless. Officer Eddy (Sidné Anderson, "Savages") pulls up to his 'home' on Delaware's coast, a beat up Pontiac Bonneville and suspect he's being hauled in for illegal camping, but no, she's taking him to a safe place to tell him some disturbing news - the man who shot his parents years earlier is being released - and this is the reason behind Dwight's "Blue Ruin."

Writer/director/cinematographer Jeremy Saulnier proves his filmmaking chops as he teases out Dwight's story, but once it's been revealed and gains traction, the film becomes less and less interesting. Saulnier and his best friend/star Blair have created an intriguing, inept antihero but the old crime that haunts him and the family behind it are so crudely drawn that the film turns into a genre exercise. Dwight's a fascinating character to watch as he silently goes about his business, foraging food and entertainment. When he sets out on his mission, we're still left wondering how this man of little resource plans on carrying out his revenge. He can't afford to buy a gun and when he steals one, he inadvertently destroys it trying to get its lock off. As he sits outside prison gates behind the stretch limo which awaits the new parolee, his determination is clear, and the family have no sooner arrived at their destination than Dwight strikes. But while he's achieved his goal, he's no pro and, soaked in his victim's blood, Dwight pulls one inept move after another, the film taking a comical tone. Then Dwight begins to interact with other characters and it's all downhill. His sister Sam (Amy Hargreaves, "Shame"), living in what we can surmise is the old Virginia family home with her children, seems glad to see him, then not, although we never learn why (outside of the obvious - that he's directed danger to her door). Soon enough, the Cleland clan are coming to take revenge on Dwight's revenge. Clearly this is supposed to be a parable on the never ending cycle of violence, but there's no real rationale driving it. The Clelands (the matriarch is played by 'The Brady Bunch's' Eve Plumb!) are like a bunch of bloodthirsty hillbillies (even their name is too reminiscent of 'The Simpsons'' Cletus) and the whys and wherefores as to how these two families would have ever intersected are completely disregarded. If the film is meant to be a diatribe on American gun culture, the deaths portrayed should matter and they don't. Macon Blair, who begins the film looking like Zach Galifianakis before morphing into a young Nathan Lane, is an endearing character (we're expertly tipped off by the compassion shown by Anderson, striking in a very small role), his look of hapless confusion reflecting a vulnerability. But outside of Anderson support is lacking. Kevin Kolack makes the biggest impression as Teddy Cleland, the one member of the clan who appears to respect reason. "Nebraska's" Devin Ratray provides exposition on gun safety as Dwight's old friend Ben, but again, one old photo doesn't suffice to establish the strength of their relationship, only its length. Saulnier certainly has an instinct for setting mood and using landscapes, but even if he's expertly baited his hook at the world's finest fishing spot, he hasn't landed the fish. That doesn't mean spending some time there is a waste of it, but although "Blue Ruin" has garnered a lot of critical acclaim, Saulnier still needs seasoning.